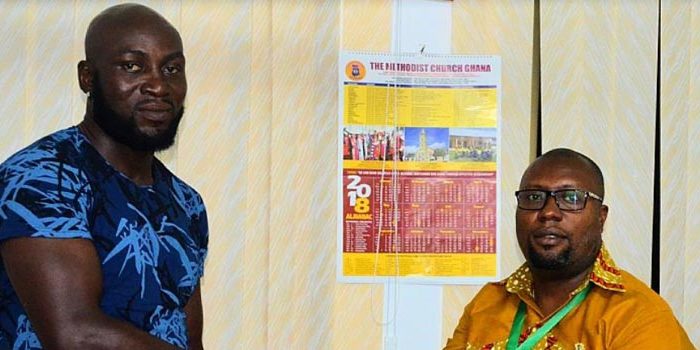 The visit was also to enable him thank Wassaman for their spiritual and physical support which he said enabled him to win his fight against Okolla Morris from Nigeria in August 2018 at the Bukom Boxing Arena in Accra.

The Cabic Promotions boxer also took the opportunity to introduce his campaign against the abuse of drugs such as Tramadol to the Municipal Chief Executive and asked of his support to enable him fight against the menace.

The Heavyweight champion was led to the Municipal Assembly by Mr Thywill Quarshie the general manager of Best FM a radio station based in Bogoso as well as his technical men, the local media and some of his teeming supporters.

Hon. Mozart Kwaku Owuh said Nii Lartey Harrison had brought honor to the country by achieving the feat and urged him to shun complacency and remain focus on his career.

He reminded him that being a champion goes with responsibilities and that the time has come for him to be more disciplined, humble and determined as he strives for greater heights.

He urged Nii Lartey Harrison to start early training since he will be defending his title in December.

Nii Lartey Harrison said he was happy to have met the Municipal Chief Executive and assured him of working hard to bring more honors to the country by fighting to defend the title.

Mr Quarshie thanked the MCE for granting them audience and for his continued support for the development of sports in the Municipality.