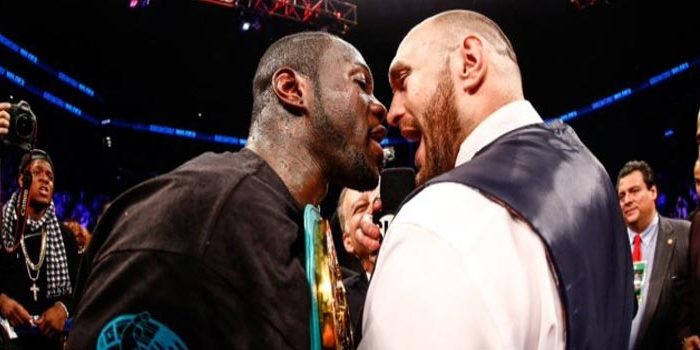 TYSON FURY has been warned he has no chance of ever facing Anthony Joshua if he gets beaten by Deontay Wilder in December.

And WBC heavyweight champion Wilder has to agree to face Joshua BEFORE he faces Fury if he wants the unification clash in April.

The British star also has the national stadium booked for April 13 and is keen to face the winner of Wilder and Fury on that date.

Joshua’s promoter Eddie Hearn said: “If Fury gets beat, he’s done. If Fury gets knocked out in that fight, the AJ fight will never happen.”

The Matchroom chief insists he is still keen to do a deal with Wilder’s camp for an April showdown but warned them he will not wait for the American’s December date with Fury.

The actual date and venue of that fight is set to be announced next week but Hearn will not wait until after the fight to start talking about a deal for Joshua in April.

He said: “From a promoter’s perspective I love the fight and it makes an AJ-Wilder fight twice the size in America and Wilder will get a bigger slice of the pie if he wins. We’re fine with that.

“But the weird thing from our side is that we have to make a decision for April fairly soon after our fight.

Fury is due to face Deontay Wilder in December, having won his comeback fight comfortably

“But if they are going December 1, we will definitely know our next opponent before December 1. We can’t wait because of all the mandatory situations.”

Joshua completed a workout in front of his fans at York Hall last night in London.

There is no doubting his star status on these shores as he prepares to pocket another bumper pay day of close to £15m this weekend.

But fellow Brit Amir Khan believes Joshua should take a pay cut to go to America if he wants to become a big name around the world.

Khan left promoter Frank Warren in 2010 to join up with US stable Golden Boy and ended up having 10 fights on the other side of the Atlantic before returning to team up with Matchroom this year.

He said: “I remember making a lot of money with Frank Warren. I left him and went to America and initially made a million dollars less under Golden Boy Promotions.

“But it wasn’t about the money for me, it was about getting my name out in America.

“After making less money for the first couple of fights, I started making the most money in the light-welterweight division apart from pay-per-view.

“I risked it. If I had got beaten and came back to the UK, I don’t think the UK would have wanted me back on pay-per-view, but I took a gamble on it.

“I think Joshua could do the same if he forgets about the money and just goes to America and fights. Fighting in America, definitely makes you a global star.”