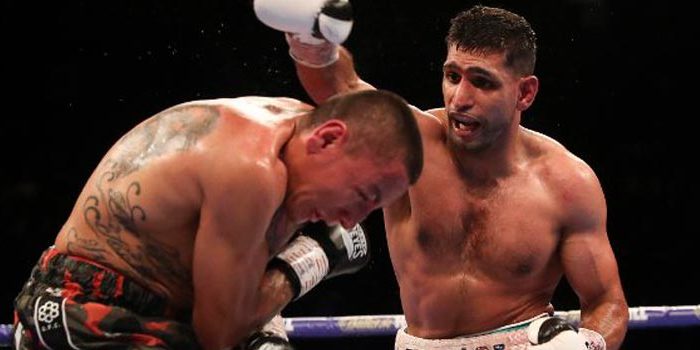 Amir Khan was given a scare by Samuel Vargas before a unanimous points win in Birmingham on Saturday as his world title bid credentials were questioned.

Khan claimed to have prepared for this bout as if it were a title fight, but few top-class opponents would have been concerned by what they saw from the 31-year-old after a strong start.

Kell Brook – one potential opponent – was in the crowd to watch as Khan, who had ended his prior fight against Phil Lo Greco within 40 seconds, hit the canvas in the second round.

Khan lifted himself to get the win, but he was forced to go the distance and faded badly late in the fight, having begun with flurries of punches that harked back to his best form.

Indeed, the Briton’s speed had appeared too much for his opponent early on, knocking Vargas down at the beginning of the second and then pressing on to capitalise on his advantage.

Vargas was forced back and back as the Colombian’s determination to respond and meet Khan head on opened up further opportunities.

But incredibly, with the fight seemingly under control, Vargas delivered on his pre-bout promise that he would find the former world champion’s fragile chin, landing a right hand to send Khan crashing down.

Khan lifted himself to knock Vargas to the floor again in the next round, seemingly with a punch to the back of the head, and a thrilling contest continued with a flurry of punches from both men.

Vargas somehow kept his feet under a series of blows, but Khan appeared to tire and the fight became a slog, with neither man willing to go for broke.

Although the remainder of the rounds played out without further major incident, this was a far from comfortable evening for the victor, who must now mull over his next move.