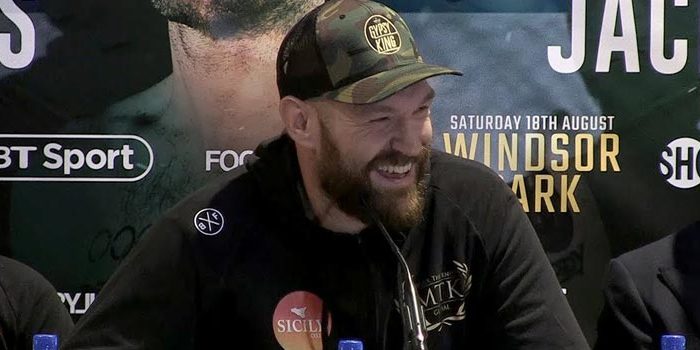 If Tyson Fury defeats Deontay Wilder, the outspoken ex-champion expects that to make it harder, not easier, to get a shot at Anthony Joshua.

Owning the only heavyweight title Joshua doesn’t possess and taking out the undefeated knockout artist everyone wants Joshua to fight should make Fury the most attractive opponent for Joshua in 2019.

A Joshua-Fury fight would be an enormous event in the United Kingdom, where it would draw a capacity crowd in excess of 90,000 to Wembley Stadium in London, and would earn Joshua and Fury tens of millions of dollars apiece.

“I don’t think that fight’s possible to make,” Fury told BoxingScene.com Wednesday after an open workout in Belfast, Northern Ireland. “They’re chickens. They don’t wanna fight. They didn’t wanna fight Wilder for $80 million. He ain’t gonna fight me for no amount of money.”

By “they,” Fury referred to Joshua, his promoter, Eddie Hearn, and his trainer, Rob McCracken. The $80 million Fury mentioned was the $50 million guarantee Joshua was offered to fight Wilder and the $30 million the British superstar would’ve been guaranteed for a rematch if Wilder would’ve beaten him.

The 30-year-old Fury (26-0, 19 KOs) won’t make nearly that much money for facing Wilder (40-0, 39 KOs), but he’ll be paid plenty for challenging Wilder in November if Fury can get past Italy’s Francesco Pianeta on Saturday night at Windsor Park in Belfast. The Wilder-Fury fight, which will be officially announced in the ring if Fury defeats Pianeta (35-4-1, 20 KOs), will take place November 10 or November 17 at an undetermined Las Vegas venue if Fury beats Pianeta.

Challenging Wilder would afford Fury the opportunity to win the only title, the WBC championship, that Fury didn’t take from Wladimir Klitschko in November 2015. Fury gave up the IBF, IBO, WBA and WBO titles he won from Klitschko to address addiction and mental health issues.

The 28-year-old Joshua (21-0, 20 KOs) has since won those four titles. He’ll make a mandatory defense of his WBA title against Alexander Povetkin on September 22 at Wembley Stadium.

If Joshua beats Russia’s Povetkin (34-1, 24 KOs), he has committed to returning April 13 at Wembley Stadium. Regardless, Fury feels he is the heavyweight champion because no one has beaten him since he upset Ukraine’s Klitschko (64-5, 53 KOs) by unanimous decision.

“I hold the lineal status, going back to John L. Sullivan,” Fury said. “Of course I’m the man. Just look at me and tell me I’m not.”

Wilder will look at Fury from a ringside seat Saturday night, when Wilder will serve as a guest commentator for BT Sport’s coverage of the Fury-Pianeta bout. Showtime will stream Fury-Pianeta and the 12-round, 126-pound title bout between Belfast’s Carl Frampton (25-1, 14 KOs) and Australia’s Luke Jackson (16-0, 7 KOs) on its YouTube channel (3:30 p.m. ET/12:30 p.m. PT).