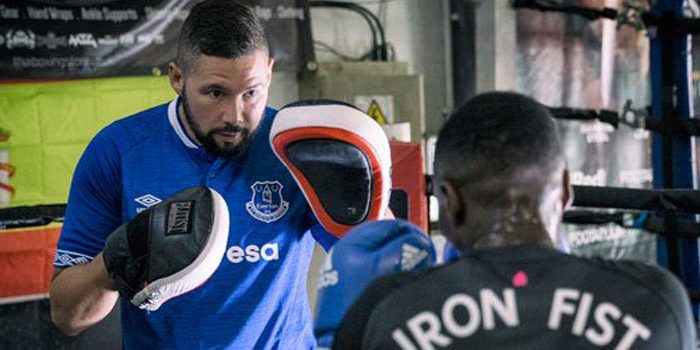 Fatuma Zarika, the WBC world female super bantamweight champion and BoxingAfrica.com’s 2017 African Fighter of the Year, is back at it again.

Zarika has stepped up preparations for her title defence on September 8 in Nairobi and is now training under former (WBC) cruiserweight title holder Tony Bellew.

Zarika, who will square it out with Mexican Yamileth Mercado at the Kenya International Convention Centre (KICC), has been training under Bellew in Liverpool, Britain for the last three weeks.

Zarika is on her maiden trip in Britain courtesy of her sponsors SportPesa.

Zarika said she has been humbled to meet, train and spend time with Bellew, who is set to jet into the country next month to watch the highly anticipated fight.

“Meeting Tony was such a great experience for me. He is funny, calm and very humble. He encouraged me to be the best version of myself and offered me pointers on how to improve my game ahead of the fight,” said Zarika in a statement.

Bellew won the vacant WBC cruiserweight title on May 29, 2016 when he knocked out Ilunga Makabu from the Democratic Republic of Congo in Liverpool and staged a successful defence against American Benjamin Flores with another KO on October 15, the same year.

Zarika made history in 2016 when she became the first Kenyan to win a WBC world title when she dethroned Jamaican Alicia Ashley of the belt in Flint, Michigan. Zarika won the fight via a split points decision before defending the title last December against Catherine Phiri of Zambia.

“The UK is a beautiful place, its way more than I had imagined and the weather is great too,” said Zarika.

“This is the most intense training I have undergone throughout my career and I am confident that it will pay off come September,” said Zarika.

Zarika is set to return to the country on September 1 before taking to the ring a week later. The fight has the billing to be one of the most entertaining boxing fights that Kenya has seen in recent history.

“I am currently working on my speed in the ring and my movement. I am not trying to make any changes to my boxing style, the last time I tried to, it cost me.”

“I have watched enough videos of my opponent (Mercado) and I am working extremely hard to ensure that I am ready to put on a great show and defend my world title.”

“She is a professional boxer as well and we are both coming to fight for the same thing, so I won’t leave anything to chance on the day.”