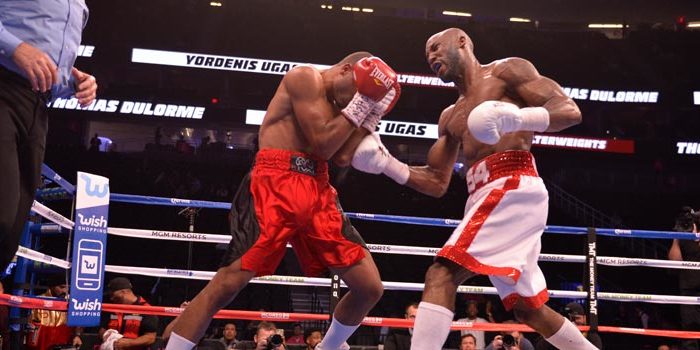 There is no looking ahead to future fights for top 147-pound contenders Yordenis Ugas of Cuba and Cesar Barrionuevo of Argentina as the two sluggers prepare for their WBC title eliminator matchup in SHOWTIME CHAMPIONSHIP BOXING action on Saturday, September 8 live on SHOWTIME (9 p.m. ET/6 p.m. PT) from Barclays Center and presented by Premier Boxing Champions.

The SHOWTIME main event will pit two of the division’s biggest names against each other as former 147-pound champions Danny “Swift” Garcia and “Showtime” Shawn Porter square off for the vacant WBC Welterweight World Championship. The winner of Ugas vs. Barrionuevo earns the WBC’s second mandatory position to the winner of Garcia vs. Porter.

Ugas, (22-3, 11 KOs), returns to the SHOWTIME stage for the second time. In February, he handed Ray Robinson his first defeat since a 2010 decision to Shawn Porter. Barrionuevo, (34-3-2, 24 KOs), making his U.S. debut, has won 10 fights in a row and has only lost once since 2010 as he looks to follow in the footsteps of Marcos Maidana and Lucas Matthysse, elite welterweights from Argentina.

Here is what the 32-year-old Ugas and 29-year-old Barrionuevo had to say from their respective camps about their September 8 matchup:

Overall, how is your training going in Las Vegas and who have you sparred with?

“We have been training at Fernando Vargas’ gym, the Feroz Fight Factory gym. We’ve been sparring with Jose Benavidez Jr. and Diego Magdaleno, and a few other locals. Nothing is really different with this camp compared to others. I’m 100 percent committed to training for this fight.”

What are the advantages of training in Las Vegas?

“I’ve been in Las Vegas for the past two and a half years. This place has changed my life. I came out here and started training with Ismael Salas, who has trained many of the best Cuban boxers. There is such good sparring out here, and there’s also mountains. I love running up Mount Charleston. This is just a perfect place for a fighter to train.”

How are you preparing to face a southpaw like Cesar Barrionuevo?

“We are sparring with lefties and trying to mirror exactly what we think we’ll see. The Argentine fighters always come to fight and are well prepared. They always go to war. Luckily I like to go to war too. So I think we have good styles that will give the fans a great fight.”

What else do you know about your opponent?

“I’ve seen some footage and that’s it. It’s not really about what he does or brings, it’s all about staying focused on what I do best. I don’t take much time off so I’m always in the gym training. I did go down to Miami a few weeks ago and actually trained in Barrionuevo’s gym and met some guys he works with, but we never crossed paths.”

You are returning to fight on SHOWTIME for a second time. Does that give you an advantage?

“Everyone who knows boxing knows I’m the more experienced fighter. This is one of his first times he’s fighting outside Argentina. I know he’s a big deal there, but he’s never seen a stage like this, with all the bright lights. I’m going to be prepared for the best Argentine fighter that shows up that night.”

What is your prediction of the Garcia-Porter fight?

“I think they are two great fighters and whoever is the most prepared on that night will win the fight. Because this is a WBC eliminator, I know there’s a chance I could fight one of them if I win my fight. I would love to fight either of them.”

How is your training camp going in Miami and who have you sparred with?

“Technically, everything is strong and with my coaches Carlos [Morgan] and Pablo [Martinez] we feel good about where we are and what we’re doing. I want to be 100 percent ready on September 8 for the fight of my life. I feel like I will be and am so grateful for the support of my team and everyone here at Caicedo Sports’ gym. I have been sparring with a bunch of local prospects, young guys with undefeated records and guys that are in the same boat as I am looking to become a world champion.”

How are you preparing for an aggressive fighter like Ugas?

“I’m formulating my plan and intensifying my training so I’m 100 percent ready. I’m focusing on my cardio and increasing my strength. That’s why I’m here in the U.S., because the level of competition is better than back home. I feel that everything I’m doing is a step up. I’m having the best training camp of my life. I’m not worrying about my opponents’ style.”

What do you know about your opponent?

“We have watched some film, but that doesn’t always help you. Split-second adjustments will be made if needed. I’m a fighter at the end of the day, and will be ready for whatever he puts in front of me. I have never met him, but I know he came and worked out at my gym. I don’t know him, but maybe after the fight we can be friends. Right now it’s kill or be killed.”

What are your thoughts about fighting on the big stage at Barclays Center?

“I know I have a huge fan base in Argentina and can’t wait to go back there and celebrate a win with them. I’m so proud of all the past world champions that have come from my country, but I’m not coming to Brooklyn as a tourist. I’m coming to fight and get the victory in spectacular fashion and to put Argentina back on the map in the sport of boxing. The objective is to look good and win and to leave a good impression fighting on SHOWTIME and for everyone watching.”

What is your prediction of the Garcia-Porter fight?

“It’s a tough fight. Maybe 50-50, but I’m leaning toward Danny Garcia. I think his experience as a world champion will show.”

Is it hard not to look ahead to a possible future fight with one of those guys?

“I haven’t thought about it for even one second. I’m focused on my next task, and that’s Ugas. I’m coming to do what needs to be done to get the win. And I’ll get that win with blood, sweat and tears. I’ll focus on Danny Garcia or Shawn Porter when the time comes.”