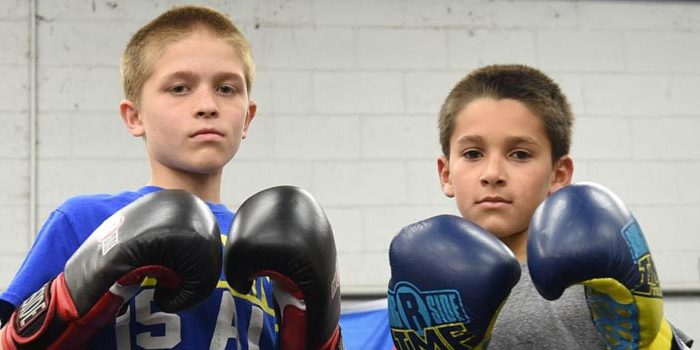 With a record of 17-8, 11-year-old Xavier Rodriguez (pictured left) has multiple amateur and youth boxing championships.

This week, however, he has a chance to take his game not just to the next level, but to the very top: No. 1 in the United States in his division.

All he has to do is win the 2018 Junior Olympics, Prep Nationals and Youth Open tournament, which will be held in Charleston, West Virginia.

This year the young southpaw worked his way up through the qualifying fights for the National Junior Olympics, winning at the state and regional levels and earning a spot at nationals.

At the state tournament this year, his first-round fight against Selim Bey of Philadelphia was close, according to Rodriguez, who said he dominated the second and third rounds.

That victory set him on the final step in the path to nationals.

Rodriguez has been nationally ranked for the past two years, first at 65 pounds and now, at 70 pounds, as a bantamweight. USA Boxing, which both sanctions and sponsors amateur events, has seven tiers of matches that earn boxers points, and determine rank. The top tier is the Olympic Games.

While Rodriguez is years away from a chance at the Olympic team, he could earn a spot on a traveling team, according to coach Will Torres.

But right now Torres and the rest of the coaches at Lancaster City Boxing Club are focused on the Junior Olympics and their gym’s chance at taking home championships not just in the bantamweight division, but the peewee as well.

Sixty-pound Jaren Colon (6-2) will once again represent Lancaster in the peewee division. Last year, at 55 pounds, he fought, and won, at the Junior Olympics. The peewee division doesn’t have qualifying fights, although it does require that the athlete have five registered bouts.

Besides his weight, Colon will have another significant difference at this year’s matches: his father, Angel Colon, will be in his corner.

Angel Colon recently began coaching officially at Lancaster City, joining Torres and David Rivera in their efforts to keep kids off the streets and in the ring.

Angel Colon said he is “very excited” to work his son’s corner and not be just “screaming with the audience anymore.”

Jaren Colon is also excited about the event, which he calls “the most fun” of all the tournaments in which he’s competed.

“I’m hoping for a gold medal.” Rodriguez said. His determination, along with his favorite combination — a one-two with a counter hook — might just put him at the top of his division.

Added bonus: the new bike and the new pair of shoes his parents have promised him if he comes home victorious.

The tournament begins Sunday. It will be livestreamed, with more information available online at go.teamusa.org/2t8jHLk.