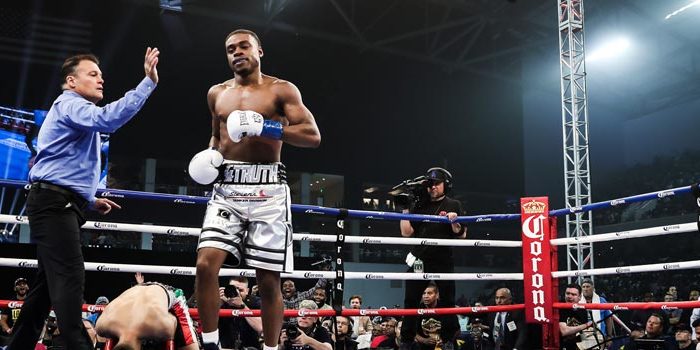 Errol Spence Jr. defended his IBF Welterweight World Championship with a first-round knockout of previously undefeated mandatory challenger Carlos Ocampo in a homecoming fight Saturday on SHOWTIME at Ford Center at The Star.

A sellout crowd of more than 12,600 fans packed Ford Center at The Star in Frisco to witness Spence’s first homecoming defense as champion and his first fight in Dallas since 2015. The consensus top-5 pound-for-pound fighter did not disappoint, pounding the body from the opening bell with his trademark body attack and superb ring generalship.

Spence, who was making his second defense as a 147-pound champion, floored Ocampo with a brutal 1-2 body shot combo, the second punch landing flush on the challenger’s side and instantly flooring him as the opening round concluded. Ocampo (22-1, 13 KOs) crippled over in pain while on the canvas, was unable to beat the count and remained on the floor for more than two minutes while Spence celebrated his victory.

“I was a little disappointed. I wanted to give the crowd their money’s worth,” Spence said.  “I wanted him to sustain a bit and give him some punishment, but the body shot got him and I dropped him.”

It was the ninth time Spence (24-0, 21 KOs) has floored an opponent with a body shot in his 24 professional fights.

“I knew if I hit him again he would probably drop,” Spence said. “That was my game plan. I’m the body snatcher. If he reacts weirdly, I just keep going to the body and I keep breaking him down.”

After the fight, Dallas Cowboys owner Jerry Jones joined Spence in the ring to congratulate him on the victory.

“We’ll definitely be back after I unify some titles. We’ll make this an annual thing where I fight here.”

Jones was thrilled with what was the first boxing event inside the Ford Center at The Star, the centerpiece of the 91-acre campus of the Dallas Cowboys World Headquarters and practice facility.

“This room was full of Dallas Cowboys football players supporting you,” Jones said. “They share your passion. I saw a guy in this ring who knew what he wanted. When you knock a guy out by hitting him once on the side of his back, you’re bad to the bone.

“I love his awareness. He had a plan from the beginning. He is exceptionally gifted. He has family that is behind him and our family, the Cowboys, want to be behind him as well.”

After the fight, SHOWTIME Sports reporter Jim Gray, who was inducted into the International Boxing Hall of Fame last Sunday, asked Spence what he would like to do next.

“I want to fight the best,” Spence promised. “Danny Garcia and Shawn Porter are fighting each other (for the WBC title) and I definitely want to make that a unifying fight. We both have the same management, we both fight on SHOWTIME. Why not make that happen? I definitely want that fight whenever it’s available.”

In the televised co-feature, Danny Roman defended his WBA Super Bantamweight World Championship with a unanimous decision over previously undefeated Moises Flores in a 12-round fight that was scored 116-112, 118-110, 120-108.

The champion Roman (24-2-1, 9 KOs) was the faster and sharper fighter from the opening bell.  Roman, who was making the second defense of his 122-pound belt, pounded the body repeatedly over 12 rounds, connecting on a staggering 50 percent of his body shots. Flores (25-1, 17 KOs), who failed to make weight for the title fight and was unable to win the belt, tired in the latter half of the fight and was largely a stationary target for Roman for 12 rounds.

Both fighters threw more than 1,000 punches, yet it was Roman who was the more effective boxer, connecting on an impressive 42 percent of his power shots.

“I was trying to box him. We tried to do a smart fight,” Roman said. “We tried to take him out, but unfortunately we couldn’t.

“I would like to unify. I would like to challenge any of the champions. I’d love to face Rey Vargas or Isaac Dogboe. I don’t mind going back to Japan either.”

“I know I messed up in training,” Flores said. “I didn’t make the weight, but I still wanted to perform and give it everything I have.

“We both hit each other a lot. I hit (Roman) with some good shots, I just couldn’t finish him. I was probably around 60 percent energy-wise. From the fifth round on I had to just fight with pure heart.

“(Roman) put on a great show for the fans, and that’s what makes me feel great. That’s all I wanted was to put on a good fight.”

In the opening bout of the SHOWTIME CHAMPIONSHIP BOXING telecast, Javier Fortuna suffered an injury while falling through the ropes due to an accidental push in the fourth round and his 140-pound matchup with Adrian Granados was ruled a No Decision.

Granados (18-6-2, 11 KOs) and Fortuna (33-2-1, 23 KOs) both came out swinging from the opening bell. In a wild fourth round, Fortuna was deducted two points, first for punching to the back of the head, and second for holding. After the second point deduction, the former 130-pound champion Fortuna aggressively moved forward and unloaded a series of shots.

Moments later, Granados and Fortuna were clinching along the ropes near Granados’ corner when Fortuna fell backward through the ropes, whipping his neck as he fell back. Complaining of pain and lack of movement, Fortuna was stabilized with a neck brace and removed from the ring on a stretcher in what was later described as a precautionary measure.

At the time of the stoppage, Grandos was leading on all three of the judges’ scorecards.

“I didn’t push him. I think he fell with his own,” Granados said.  “I think he was looking for an excuse on his way out. We were both battling, but I knew he could feel I was getting stronger. He caught me with a shot and it just turned me up.

“First and foremost I just want to pray that he’s OK. Let’s do the rematch. I’ve been dying for a fight at 140.”