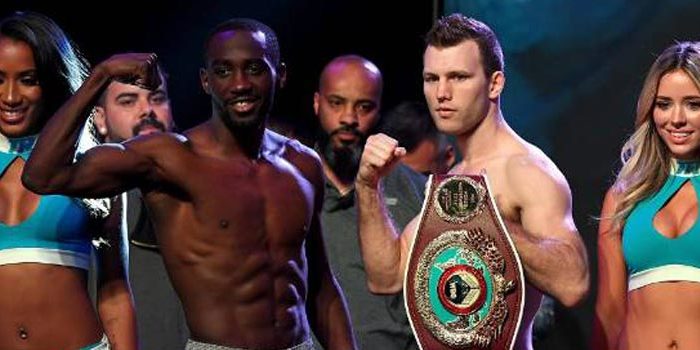 America’s Crawford, a three-division titlist and arguably the world’s best fighter, had no issue making weight, coming in at 146.5lbs for this, his first fight at welterweight.

Horn initially came in over the limit, clocking 148lbs. He then took off his underwear and was still over at 147.5 pounds. He was given an extra hour to come under the 147lb limit.

Horn then took a hot shower. When he returned, he tipped the scales at 147 pounds.

After, Horn accused promoters Top Rank, who promote Crawford, of playing “tricks” with the official scales.

Horn said he had tested his weight earlier on the official set of scales provided to his team by Top Rank.

“I knew this was coming,” he said. “I think there was a bit of tricks up their sleeve with this one, because he was just underweight and I was just over.

“There was a bit of play with the scales, we thought we’d calibrated our scales to the correct weight but they’ve tricked us.”

“Guys are overweight. Could have gone the same way for Crawford,” he said.

Horn was one of three fighters on the card who missed the weight.

The Nevada State Athletic Commission only weighs fighters by the half-pound, meaning Horn may have actually been under marginally the limit the first time around.

Horn has struggled to make weight previously but his camp was supremely confident about his preparation, saying he was in the best shape of his life and woke up needing to lose only 1kg on Saturday.

Horn said he wasn’t stressed at all by what happened.

“I could see face-to-face with Terence he was a bit rattled. He’s shaking. I’m calm. I’m fine,” he said.

“I think they think I’m a bit mentally weaker than I actually am. This stuff’s all part of it, I know it.”

This is Australia’s Horn’s first defense of his WBO title. He won the title by beating Manny Pacquiao via controversial decision in Australia.