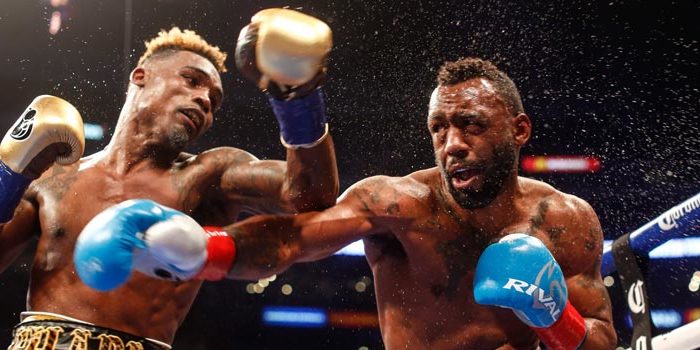 “Sometimes you knock them out, sometimes you just beat them.” said Charlo, who has now defended his 154-pound title three times. “I went to fish, I tried to get some trout but I couldn’t catch him on the hook. I know they’re used to seeing me knock boys out but at least they saw me take care of business.”

Charlo recorded two knockdowns in the bout. Trout hit the canvas for the first time in the final minute of the third round as Charlo applied heavy pressure, first connecting on a big right followed by a counter left hook that knocked Trout off balance. Just eight seconds into the ninth, Trout went to one knee on a Charlo left hook to the side of Trout’s head. It was the sixth time Trout had been down in his career. Charlo continued to exert punishment on the game but tiring Trout.

“Take those knockdowns away I won the fight,” said the southpaw Trout, 32, who also went the distance in a unanimous-decision loss against Jermell’s twin brother and interim middleweight titleholder Jermall in 2016. “I can’t make any excuses, the better man won with those knockdowns.

“Both Jermell and Jermall are really good. They are the future. But I’m not done yet. I’m not defined by my results. I’m defined by the risks I take. I’ve taken the risks and I’ve stood my ground every time against giants and killers. And I’m still here.”

“Trout will tell you who will win that fight,” Charlo said of a potential unification with IBF and WBA 154-pound titleholder Jarret Hurd. “That’s why he survived 12. If Hurd sat in front of me and took those shots he’s done.”