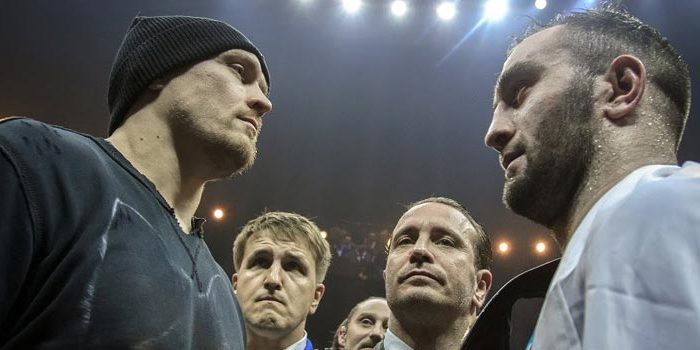 The World Boxing Super Series final and unification bout between Aleksandr Usyk (14-0, 11 KOs) and Murat Gassiev (26-0, 19 KOs), one of the most anticipated boxing match-ups in years, will take place on Saturday July 21 at the Olimpiysky Sports Complex in Moscow, Russia.
Comosa AG is very happy to announce a date and venue for the spectacular Cruiserweight Final. The Olimpiysky Sports Complex in Moscow will provide an amazing location for the first Ali Trophy Final in history with two supremely gifted athletes with rare opportunity to write history.

Plans to hold the final of the inaugural season in May had to be revised after Usyk declared that he had sustained an elbow injury during his training camp. The injury was checked by Comosa approved medical staff who agreed with the extent of the injury and recovery timeframe. This meant that the cruiserweight final date, and therefore venue, had to be moved.

The mouthwatering final will be a key event during a weekend of boxing activities in the Russian capital in celebration of International Boxing Day after Comosa were invited to bring and supervise the first final of The Greatest Prize in Boxing – The Ali Trophy – to the festival of pugilism.

Russian Boxing Federation Secretary General, Umar Kremlev: “I am very glad that the long negotiations ended with this decision: we will have the final of the World Boxing Super Series in Cruiserweight in Moscow. We are waiting for a beautiful and spectacular fight performed by Aleksandr and Murat. I am confident that this fight will be one of the best in the current decade.”

Aleksandr Usyk:
“I am once again traveling to the territory of the rival. I did it with success in the quarter- and semi-final and now I am going to Moscow to win!”

Murat Gassiev:
“I was ready to fight Usyk anywhere in the world. I am sure Usyk and I will make a great fight. The winner takes it all!”

Everything is on the line for Usyk and Gassiev:

The route to the final in Moscow was paved with drama exceeding the expectations and the tournament’s number 1 seed Usyk and 2nd seed Gassiev both awed in their quarter- and semi-finals.

In his semi-final against WBC World Champion Mairis Briedis in Riga, Usyk won a majority points decision after an action-packed thriller with great heart and unrelenting pace throughout the 12 rounds.

In an ultra-entertaining semi-final in Sochi, Russia Gassiev stopped the previously unbeaten WBO World Champion Yunier Dorticos with just eight seconds remaining of the 12th and final round.

And the dream final between Aleksandr Usyk vs Murat Gassiev became reality.

Details on the Ali Trophy Final in Moscow July 21 will be revealed in due course. Fans are asked to sign-up for ticket alerts here or at worldboxingsuperseries.com to receive the Ticket Link directly to their inbox and avoid disappointment.