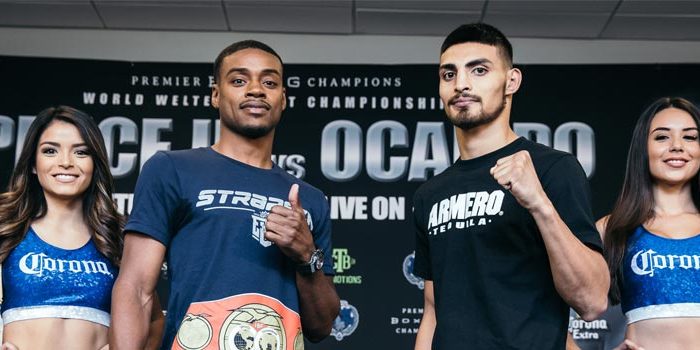 Unbeaten welterweight world champion Errol Spence Jr. and top-rated contender Carlos Ocampo spoke to media at the Dallas Cowboys World Headquarters Thursday as Spence nears his homecoming title defense against his unbeaten challenger this Saturday, June 16 live on SHOWTIME from Ford Center at The Star in Frisco in an event presented by Premier Boxing Champions.

Tickets for the event, which is promoted by TGB Promotions in association with Man Down Promotions, are on sale now and can be purchased at http://www.SeatGeek.com.

Here is what the press conference participants had to say Thursday ahead of the first boxing event to take place inside Ford Center at The Star:

“I’m really happy to be here and I’m so happy that everyone came out. Saturday night is going to be great. I’ve been training for 10 weeks and I’m 100 percent focused on Ocampo. I’m here to do my job, which is to win and look good winning.

“Ocampo is very dangerous because he has nothing to lose. It’s his first title fight, which is a position I’ve been in before. I had a lot of fire and I felt like I had nothing to lose. I’m sure he’s been training hard and is focused. I know he’s fighting for him family so he’s going to come to fight. I want a guy who’s going to test me so the crowd gets their money’s worth.

“I’ve had pressure my whole boxing career. Being on Olympian and a top prospect was pressure, but then I also went overseas to take the title from a top fighter. I’ve always overcome the pressure on me and I’m going to overcome another test on Saturday night.

“Every fight is a statement fight. It doesn’t matter who I’m fighting. All eyes are on me in the welterweight division. People want to see if there are chinks in my armor, so it’s important for me to put on a great performance and prove I’m the best welterweight in the division.

“Dallas already is a boxing town, just not enough boxing comes here. I can be the star who has annual fights and bring the city out like we’re doing Saturday night. I’m going to prove we’re a boxing city in Dallas and that Texas is a boxing state period. I do this for the whole state.

“We work hard every camp and we’re 100 percent dedicated. There hasn’t been much difference in this camp than normal. The sparring with Jermell Charlo was top quality and has me prepared for Saturday night.

“I’m ready to line up those other champions. I’ve said that since I was 15-0. I want to fight every opponent and take them out no matter who it is. I’m here to prove that I’m the best in the division.”

“We’re here on the same stage and I’m ready. I’m appreciative to be here and I’m calm. I have nothing to lose. He has all the pressure of being in his hometown. I’m just relaxed and ready to fight.

“I’ve studied his fights enough. What’s most important is that I know that he has everything to lose and I don’t. He has a home field advantage, but at the end of the day, it’s just two guys in the ring.

“I’ve gotten a great reception from the people here in Dallas. I’ve been treated like a champion and after Saturday I’ll be a world champion. You don’t want to miss this fight.

“He can try to come and knock me out, but this is my dream. This is what I’ve trained my whole life for and i’m not going to let this chance pass me by.

“I’m going to use my height, distance and jab throughout the fight. The counter will be important for me. I’m going to look to catch him so he better be ready.

“I’m going to leave everything in the ring. I’m going to show what I have and give everyone a great performance from start to finish.”

“Flores is a tough opponent. I don’t overlook anybody. I know he’s going to come in and fight. Defending my belt is the only thing that’s on my mind.

“We work hard like always. The only thing that changes in camp is strategy, and we will be ready for anything Flores can bring.

“We’re going to be ready for his pressure. I’m going to fight a smart fight. If we have a chance to take him out early, then I’m going to jump on it. You never know what could happen in a fight.

“Flores is not an easy opponent. Nobody is at this level. I just work hard every day like it’s my first shot at a world title. I know that if I put in the work, everything will come together in the ring.”

“Roman is a good fighter, that’s why we’re here. Hopefully on Saturday night he won’t be able to take my volume of punches. I’m going to bring pressure for every moment of the fight and we’ll see if he holds up.

“Everyone knows that I like to come forward and make exciting fights. There will be drama and I’m expecting to come out of there with my hand raised.

“On Saturday night I’m going to get redemption for everything that happened in my last fight and deliver a win and an exciting fight. This is a chance that I’ve worked and trained hard to get again.”

“Everyone knows what I can do here in the ring. I’m very glad to be here meeting Granados, because we’re going to give the fans a a great fight on Saturday that’s going to steal the show.

“I know that Granados has fought a lot of top opposition, but on Saturday night, I’m going to be a different fighter than he’s ever seen in the ring.

“This will be a battle. Everyone will see on fight night what the difference is between me and him. I’m a special fighter. I’m going to prove it again on Saturday.”

“It’s been a long hard road to this fight. I know I have marks on my record, but I can easily say that I know all of them have been controversial. I’ve pushed through everything and I know that I’m truly respected as a fighter.

“I’m always going to bring the same fire and determination to the ring. If my opponent is brave enough to stand with me, then it’s going to be all-action. Either way, I’m coming to break him down and get the victory.

‘Recently I’ve gone against a lot of opposition that is naturally bigger than me, but I’ve never backed down or been afraid of any of them. This fight is going to prove that I belong in the upper echelon of boxing.

“I’ve checked out Fortuna’s fights and he’s a scrapper. He likes to bang too in the ring just like I do. It’s all the recipes for a can’t miss fight.”

“I’m very happy to see everybody out here and we’re so glad that the fans are getting involved. This city means everything to me and Errol, so to bring a great night like this and have this huge reception from the fans, is a little bit of extra motivation.

“We are so excited for Saturday night and to be bringing the first boxing event inside Ford Center at The Star. Dallas is a great fight town and who better to headline the first title fight here in 50 years than hometown favorite Errol Spence Jr.? He is sure to put on a great performance for his hometown fans.

“It has truly been a pleasure to work with the entire Dallas Cowboys organization throughout this promotion and we hope this is just the start of bringing sellout crowds here to the heart of Texas. We can’t wait to see you all there on Saturday night.”

“SHOWTIME is thrilled to be here at The Star for the first boxing event inside of Ford Center. Week after week and month after month, we’ve delivered the best fighters in the most meaningful fights to boxing fans. Saturday is the 11th SHOWTIME CHAMPIONSHIP BOXING this year. These events have featured more than 15 world title fights, just in the first six months of the year. We’re doing more boxing and more high quality boxing than any other network by far.

“Saturday is no exception, especially in terms of quality. Errol Spence Jr. is a consensus top five pound-for-pound fighter. He’s knocked out 10 straight fighters and it was 2014 when an opponent last went the distance. Errol is in many ways our Dak Prescott (Dallas Cowboys quarterback), he’s a young star, a fan favorite and we expect him to be one of the faces of the sport for years to come.

“If you know of the tradition of Mexican fighters in this sport, then you know that Carlos Ocampo cannot be overlooked. He’s coming to win and that makes him very dangerous and should create an exciting fight.

“Both of the opening bouts leading up to the main event on SHOWTIME are significant bouts with fighters that bring all action styles to the ring.”