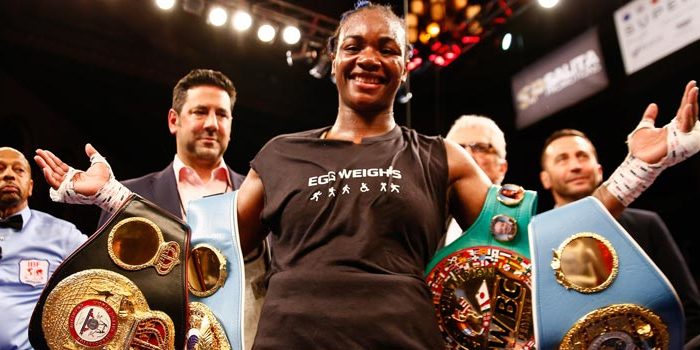 And now they have their sights set on one another.

The two-time Olympic Gold Medalist Shields of nearby Flint, Mich., was knocked down for the first time in her career 53 seconds into the first round, but she was able to come back and win every round after that to become a two-division world champion capturing the vacant IBF and WBA Middleweight World Championships against Hanna Gabriels. The judges’ scored the fight 98-91, 97-92 twice.

Hammer entered the ring after the Shields fight, and an emotional Shields pressed toward Hammer and some pushing and shoving ensued. (see video HERE)

“I’m just tired of Hammer disrespecting me all the time,” Shields (6-0, 2 KOs) said. “She comes into the ring after all my rights, talks trash, and then she goes in there and looks like [crap] against Nelson. I’m sick of it. But I let her know I’m more than ready for a fight against her. She wanted me to lose tonight, but I wanted her to win because I want to fight her. We have to unify now.”

Shields and Gabriels started the fight swinging furiously, but it was Gabriels (18-2-1, 11 KOs) who connected on a right uppercut sending Shields to the canvas. (see the knockdown video HERE)

“I trained to go the distance but my heart betrayed me, because after that first knock down, I was looking for another one,” said Gabriels, the reigning WBA and WBO champion who was fighting in her 12th straight world title fight since winning the welterweight title in 2009. “I wanted to show everyone I had a warrior’s heart.

“I didn’t feel I had an advantage after the knockdown. I felt I had to work round after round to even have a possibility to win.”

Added Gabriels: “She has a lot of power. It was a great fight and you have to accept the judges’ decision. She’s powerful and for the fans I think it went well.

Shields suffered a cut on the left cheek in round 10, and also overcame a head butt. She recalled being hurt by Gabriels’ punches to the head just three times in the fight. “The first round, fourth round and the eighth round, other than that she didn’t hit me with no head shots.”

Shields – in her first fight with new trainer John David Jackson – said she learned something about herself after the fight. “I can get put on my ass, get up and come back and win,” she said. “Tonight was my night and I have to show the world I’m the greatest of all-time. I showed who I am. Now, I’m really dangerous because you can even put me down, and I’ll still come back to win.”

The difference in the fight was Shields’ accuracy, especially in terms of her power shots as she connected on 42 percent compared to Gabriels’ 26 percent.

Shields was asked after the fight when she would like to face Hammer. “Hopefully it’s next,” she said. “I don’t need no rest. I could have whipped her tonight. I’m just so sick of her and her whole team.”

In a lopsided win in her highly anticipated U.S. debut, Hammer (23-0, 10 KOs) remained undefeated with a unanimous decision against Tori Nelson (17-2-3, 2 KOs). The scores were 100-90, 99-91 twice, to retain her WBC and WBO Middleweight World Title belts. (see Hammer-Nelson highlights HERE).

“It would have been better to get a KO,” said Hammer, who is 27 years old and from Dortmund, Germany. “I tried everything I could to get the knockout. She was tough. I hope the USA is good with this and I’m still the champ.”

“I’m really looking forward to fighting Claressa. She will try and fight me on the inside but my footwork and my reach will make the difference. The fight with Claressa will be a game-changer. It will be the biggest women’s fight ever. I would like to fight her at a neutral site.”

“I’m very disappointed in my performance tonight,” said an emotional Nelson after the fight. “It’s a loss, of course it’s disappointing. I wasn’t busy enough, I guess.”

In her last fight, Nelson lost a unanimous decision to Shields back in January. “Claressa is better,” Nelson said. “Shields has a jab and uses the ring. Claressa stands there and wants to fight. She has all the punches. Hammer only has one.”

In the telecast opener, Umar Salamov (21-1, 16 KOs) connected on a lethal right hand in knocking out Brian Howard (13-2, 10 KOs) 53 seconds into the ninth round of a scheduled 10-round light heavyweight bout.

Salamov, from Alkhan-Kala, Russia, was making his United States debut and trains at the famed Kronk Gym in Detroit with Javan “Sugar” Hill Steward. In a fight between two long and lanky fighters, Salamov landed 34 percent of his power punches compared to 27 percent for Howard and was ahead on all three judges’ scorecard at the time of the knockout.

“I was hurt a little bit in the second round from one of his shots, but I didn’t let it bother me because this is my U.S. debut,” said Salamov, a six-year pro who is 24 years old. “I just kept fighting. After I got hit with that punch, I started coming forward and as soon as I did that, the fight changed.”

Salamov said he knew once he connected on the first right that Howard was hurt. “I knew as soon as I landed the punch that he would be very hurt,” he said. “I felt it up to my elbow. I didn’t want to hit him after that because I knew he was finished.”

The former cruiserweight Howard had a couple of highlights and was able to effectively land his right hand on several occasions, including one powerful right cross in the seventh round that seemed to stun Salamov.

“I would say I did fair, I did OK,” said Howard, a former minor league football player who lives outside of Atlanta and was making his SHOWTIME debut. “I was fortunate to get the call by Salamov’s team and by SHOWTIME. I’ll be back.”

Friday’s tripleheader will replay on Monday, June 25 at 10 p.m. ET/PT on SHOWTIME EXTREME and will be available on SHOWTIME ANYTIME® and SHOWTIME on DEMAND®.