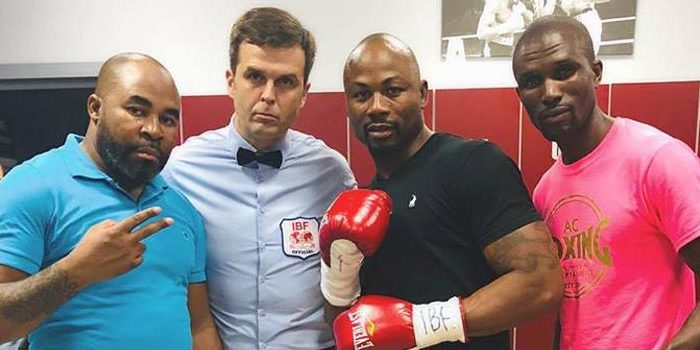 Cruiserweight Wilberforce Shihepo of Namibia was game but outgunned by Russia’s Aleksei Papin as Papin scored an eighth-round TKO over Shihepo on Saturday night at the Floyd Mayweather Boxing Academy in Zhukovka, Russia.

With the win, Papin picks up the vacant IBF international title.

Fighting on enemy territory, Shihepo took the fight to Papin but a right hand toward the end of the first introduced him to the canvas for the first time in the bout. The Namibian beat the count and the bell rang a second later.

Shihepo never stopped trying but Papin was too skilled. He controlled the action from the outset, breaking his foe down with well-placed counters to the head and body. Shihepo slowed badly as the bout progressed. Papin’s work culminated in a huge seventh where Shihepo tasted canvas twice.

He was still wobbly at the start of the eighth. Papin pounced, wailing away until referee Yury Koptsev stepped in at 0:24 of the round.

Shihepo must now ponder retirement. Once a crowd-pleasing fighter at 160 and 168 pounds, he hasn’t carried his power with him to the cruiserweight division and his age has taken a few miles per hour off his best punches.

Papin, on the other hand, is inching closer to a world title shot. The Russian has now notched two successive impressive wins, including a first-round TKO over journeyman Ismayl Sillah in his last bout.

While the Russian is making noise on his home soil, this writer would like to see him leave the comforts of Russia and test himself against the world’s elite in his subsequent bouts.