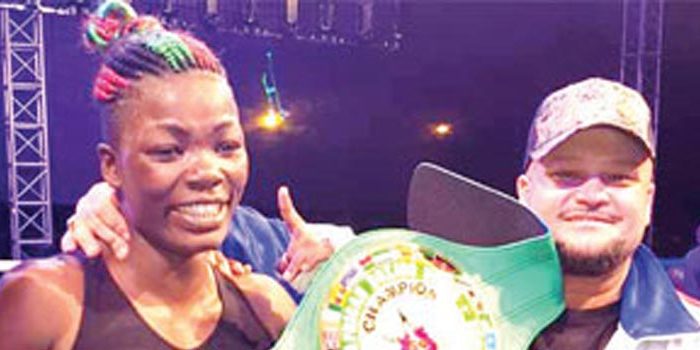 Feeling all excited, Bashir said she felt great to win the title and the bout.

President Peter Mutharika and the First Lady congratulated the 21-year-old Bashir for winning the Commonwealth belt.

Mutharika said Bashir’s triumph had shined a light on Malawians’ spirit of hardwork, resilience and determination in their various undertakings.

He then encouraged other athletes to emulate Bashir’s example.

“It is my wish that all sporting disciplines will emulate the boxing fraternity which is producing good results both at regional and global contests.

“Once again, well done Anisha, we are all proud of you!!,” said Mutharika in a statement posted on the Malawi government Facebook page.

The African Boxing Union super lightweight champion,  Bashir, had been confident ahead of her fight for the vacant Commonwealth female lightweight title in the

United Kingdom, insisting that she would grab the title to make Malawi and Africa proud.

Bashir, whose trainer is Zimbabwean Clyde Musonda, said she had well prepared for the bout.

Musonda had also told the press that they watched Smith on YouTube and devised a good game plan so as to win the contest.

“Anisha will be Smiths toughest opponent ever and it will be an uphill task for Smith. Chances of Smith being Anisha’s next victim are high. This is my own analysis as I have been in boxing for 32 years,” said the trainer.

This is the second time around this blossoming female boxer has won an international title as in December last year she was crowned Africa Boxing Union (ABU) super lightweight champion after flooring Kenyan Consolota Musanga in Nairobi.

The odds appeared stacked against the Malawian boxer prior to the fight, but she defied the odds to win on technical knockout (TKO) with a round to spare in the 10-round contest .

Following the victory, Anisha rose a step further and this gave her a chance to challenge for the World Boxing Council (WBC) silver belt.

Malawi Professional Boxing Control Board (MPBCB) president Lonzoe Zimba said: “As a board, that is what we have been looking forward to — that our boxers should rise to the occasion and win international title bouts.

“We are hoping that Anisha’s success will inspire other aspiring boxers to come on board and take up the sport as their career.

“Anisha worked so hard to achieve this and she deserves it and that should be the spirit,” he said.

Bashir has fought 11 times, winning six by knockouts and losing five bouts, one of them through a technical knock-out.