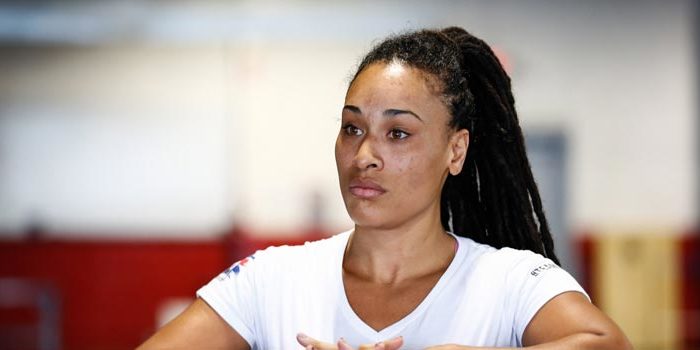 The SHOWTIME BOXING: SPECIAL EDITION telecast begins at 10 p.m. ET/PT and features the No. 1 fighter at 168 pounds facing the No. 1 fighter at 154 pounds as they both attempt to become champions for the first time in the middleweight division. The telecast also features unified women’s middleweight champion Christina Hammer defending her WBC & WBO titles in her U.S. debut against former world champion Tori Nelson. Also, light heavyweight prospects Umar Salamov and Brian Howard will meet in a 10-round matchup that will open the tripleheader from Masonic Temple in Detroit.

Here is what Gabriels had to say today at the Downtown Boxing Gym in Detroit:

“I think that this is a time right now where women can have this type of platform. Claressa is a great champion and I have faced great women’s champions. I think it’s a great time for boxing fans to enjoy a quality fight. She’s a champion. I’m a champion. This will be a great matchup.

“You are going to see a very technical and aggressive fighter. That’s the only way that you can fight Claressa because she’s so aggressive herself and so tough, you can’t go in the ring passive against her. You have to put your life on the line in there and that’s what I’m planning to do.

“I feel honored to be on such a great card. This is a great opportunity and I just hope everybody sees this the way that I do. We trained hard. In my case, I wanted to bring the very best out of myself so the fans could leave the arena feeling great. This is what boxing is all about. Bringing entertainment and emotions that most other sports don’t bring to people.

“This fight means a lot to me. Every person that I love is going through a hard time right now, including my family. I just want to lead by example and show everybody that all odds are nothing. You can still fight the battle with as many resources or as little resources as you have. I’m dedicating this fight to all my loved ones because I promise there will be better times for us.

“When I was five years old I was sexually abused so my teenage years were tough. Sports always took me away from that. When I got an injury and I had to stop competing in track, I thought my life was over. For the next five or six years, I was very destructive and felt like I didn’t have a purpose. When I turned 24, I started a different passage and learned that everything that happened to me just made me the person I am today.

“We don’t really focus on anybody’s weaknesses because we believe if you’re a good professional and you are dedicating your life to this, you are supposed to get better at your weaknesses. So we focus on her strengths and I think we have a great plan. They say that she’s been underestimating me a lot but I think it’s part of her game and part of what she does.

“I think her strengths are pretty obvious. She has great feet. I don’t know if she punches hard but she’s very explosive. She must have a lot of power and she’s very defensive. She keeps her distance and she’s so big and I’m so small that we will have to risk a lot of things. Her confidence is one of her biggest strengths.

“This will probably be my toughest fight so far. I never had an amateur career, I had just one fight. Claressa has fought 80-something times so my schooling has been in the professional environment and I have had to learn in the process. Every fight has been a hard fight because I have to solve problems and I think she is definitely the toughest opponent because she’s so tall and so fast. She must walk around normally at 185 pounds and I’m not as big so we were a little worried at the beginning at how we would reach her body but we finally were able to figure that out in training and I’m confident that my game is going to surprise her a lot.

“Hopefully we can bring a surprise and people will get to see me and let everybody know that there are more great boxers out there that aren’t getting the same exposure or marketing that Claressa is getting. I don’t feel disrespected, I see this is an opportunity to show what I’ve been working on. Let them plan. Maybe those plans will fall.