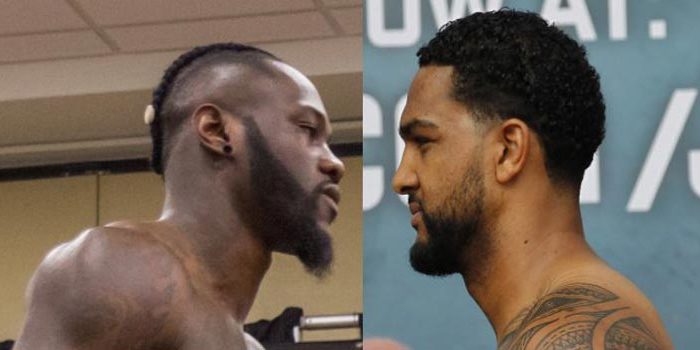 The confident contender thinks so little of the hard-hitting WBC heavyweight champion that Breazeale believes beating Wilder would be easier than each of his last two victories. Breazeale beat Poland’s Izu Ugonoh and American veteran Eric Molina by technical knockout in his last two fights.

The 6-feet-7, 255-pound Breazeale probably will be Wilder’s next opponent now that negotiations have fallen apart for an Anthony Joshua-Wilder showdown. Not only is Breazeale the mandatory challenger for Wilder’s title, they also have a personal score to settle after an altercation in the lobby of Birmingham, Alabama, hotel in February 2017.

Whenever they fight, Breazeale is convinced he’ll become the first fighter to defeat Wilder.

“I’ve paid close attention to Deontay’s last three fights, and I’ve seen a lot more weaknesses than I’ve seen strengths, particularly when he has someone hurt,” Breazeale told premierboxingchampions.com. “When you smell blood, you’re supposed to go in for the kill, but his fundamental skills aren’t there and he falls apart.

“With his big, wild, looping shots, Deontay is so unorthodox that it’s not even funny. It’s almost like a circus act. Strength-wise, we all know that he’s got a big right hand. But at the same time, I don’t know if he’s ever knocked anybody down or knocked anybody out who has been tested or has a chin.”

Breazeale (19-1, 17 KOs) watched from a ringside seat as one of his frequent sparring partners, Gerald Washington, was competitive with Wilder until Wilder stopped him in the fifth round in February 2017. Earlier that night, Breazeale survived severe trouble, including a fourth-round knockdown, to knock out the previously unbeaten Ugonoh (18-1, 15 KOs) in the fifth round at Legacy Arena in Birmingham.

It was there that Breazeale and Wilder’s younger brother, Marsellos Wilder, got into an argument at ringside while Wilder was in the ring with Washington. That situation initiated the Wilder-Breazeale brawl at the nearby Westin Birmingham later that night.

Breazeale, 32, filed a lawsuit against Wilder following that melee.

“Sitting at ringside and watching what Gerald was able to do with Deontay for the first couple of rounds, I definitely knew at that point that I could beat Deontay,” Breazeale said. “I was literally chomping at the bit. I thought maybe the first round was a flaw, but when round two came, Gerald was still doing it.”

Breazeale’s lone loss was a seventh-round technical knockout defeat to Joshua in June 2016 at O2 Arena in London. The 2012 Olympian from Eastvale, California, doesn’t think Wilder would give him nearly as much trouble as England’s Joshua (21-0, 20 KOs).

“I was thinking that when I get my opportunity against Deontay, it’s going to be an easier day at the office than it was against Izu or Molina,” Breazeale said. “Deontay is very awkward, which is crazy knowing that he’s gotten so far being a former U.S. Olympic bronze medalist in 40 professional fights and doesn’t really have any fundamental skills.

“You would think that he would be more under control when he’s gotten somebody hurt, but he’s almost like a street fighter in there. You get a lot of people making fun of the heavyweight champion of the world. You also have individuals who don’t even know who he is. That’s because of the fact that his art is not as honed-in as it should be, if that makes sense.”

Breazeale and Wilder are the same height, but Breazeale considers his weight advantage a key to him defeating Wilder. Breazeale, a former quarterback for Northern Colorado, has weighed at least 250 pounds for most of his professional fights.

“I believe that what he weighed for [Luis] Ortiz was at 214,” Breazeale said of Wilder’s 10th-round knockout win March 3. “You’re 14 pounds away from fighting at cruiserweight, so there is no way in hell that you should be getting any respect from anybody who is above 230 pounds. I respect anybody who gets into the ring. But when you’re talking about me at 6-foot-7, 250, or Anthony Joshua at 6-foot-6,  254 pounds, those are two big, heavy-handed guys who get respect the first time that they hit somebody in the first or second round.

“Deontay has shown me nothing that I go into the gym worrying about. It just seems like Deontay Wilder, time and time again, has been getting lucky to land that right hand because he’s just been lucky to fight guys who haven’t had their chins truly tested.”