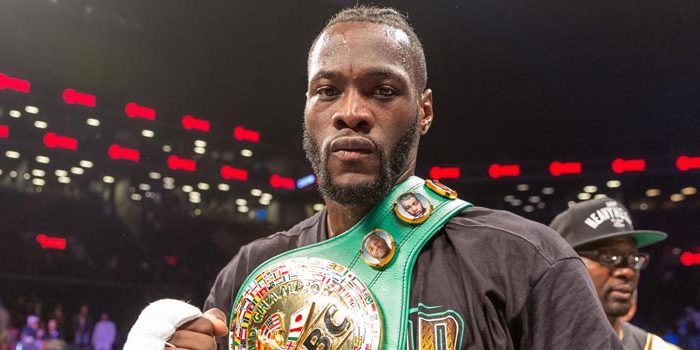 At least one person was unimpressed by Anthony Joshua’s unanimous decision win over Joseph Parker. WBC world heavyweight champion Deontay Wilder made his feelings known on social media, telling the victor, “Take AFRICA off your arm. They’re warriors. You from UK brotha.”

Joshua has a tattoo of Africa on his right arm. He was born in England to parents of Nigerian and Irish descent. The unified WBA, IBF & WBO heavyweight champion spent most of his early childhood years in Nigeria before returning to England. He represented the UK in the 2012 Olympics in London, winning a gold medal for the country.

Joshua (21-0, 20 KOs) is considered the world’s best heavyweight, but Wilder (40-0, 39 KOs) is making a strong case as the division’s main man. In his last bout, he scored a tenth-round stoppage of the feared Luis Ortiz in a thrilling battle. Joshua hasn’t been as impressive since his own war versus Wladimir Klitschko in 2017. Subsequent bouts versus Carlos Takam and the aforementioned Parker has slowed his buzz. He appeared tentative versus Parker. The strange one-sided scorecards in his favor–the bout was highly competitive–didn’t curry favors with the public either.

Further hurting Joshua’ status is his unwillingness to face Wilder, who has been calling him out since the Klitschko bout. However, he did deliver a message to the “Bronze Bomber” immediately foowing his win over Parker, saying he wanted to fight him next and promising to “knock him spark out.”

Wilder was supposed to be ringside for Joshua-Parker as an analyst for Sky Sports. He asked for one condition, that he be allowed to confront Joshua face-to-face in the ring, assuming “AJ” balked. However, when Joshua and promoter Eddie Hearn balked at the idea, Wilder pulled out.

Joshua-Wilder is considered the biggest fight in boxing today. Both sides are expected to sit down and negotiate in the coming weeks but sources close to BoxingAfrica.com informed us that Joshua is likely to take on Alexander Povetkin or Jarrell Miller next. This would leave Wilder to choose between Dominic Breazeale and Adam Kownacki.