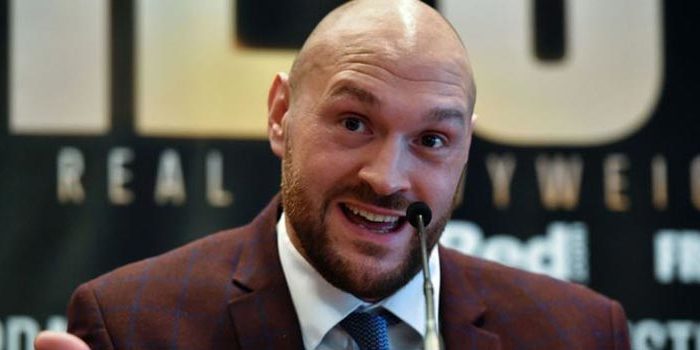 Fury caused a colossal upset in his previous bout in November 2015 when he ended the 11-year reign of Wladimir Klitschko with a masterful points victory in Dusseldorf.

Now, the unbeaten 29-year-old (25-0-KO18) will fight for the first time in two-and-a-half years at the Manchester Arena on June 9 after signing a promotional deal with Frank Warren.

Ahead of an official press conference on London’s Park Lane, Fury said: “A lot of people out there are claiming to be the best and I know they’re not.

“They won’t be a match up for me. They’re sluggers and wild punchers and I’m looking forward to getting in there and showing them.

“Let’s say I’m a lot, lot, lot lighter than I’ve been in the past. If Frank asked me to fight this weekend, I’m ready. I’m better than I’ve ever been.”

Warren added: “The heavyweight division should now be put on notice because the lineal champion will be looking to pick back up where he left off.

“I am thrilled Tyson has entrusted us with the responsibility of recharging his career and steering him back to where he once emphatically belonged.

“Were it not for his exploits, the now thriving and fascinating heavyweight scene might have remained stagnant. Tyson’s comprehensive schooling of the Wladimir Klitschko opened all sorts of doors from which others have ultimately benefitted.

“Now Tyson is back, in fantastic shape and full of beans, ready to take the first step on the road back towards world domination once again.

“I am certain the boxing public – who he never lost the affection of – will get behind him in force and support his journey.”

A spokesperson for MTK Global added: “It’s been a long wait but we are delighted with the news that Tyson’s return is now finalised.

“Working with Frank Warren and his team on this has been highly productive and this is just the start of another chapter of success in Tyson’s extraordinary story.

“We are all looking forward to seeing Tyson conquer the world again as he begins his climb back to the top of boxing’s marquee division.”