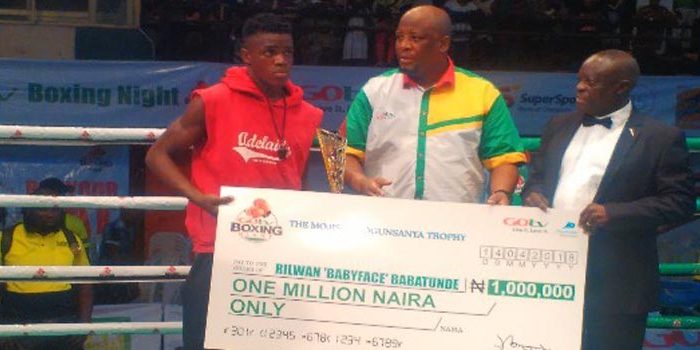 Babatunde, 21, secured a technical knockout win against Djossou Agoy Basile from Benin Republic, who threw in the towel in round two of their scheduled 10-roun bout.

With the win, Babatunde became the new West African Boxing Union (WABU) welterweight champion. He also claimed the cash prize of one one million naira and the Mojisola Ogunsanya trophy.

In another international title bout, Nigeria’s Waheed “Skoro” Usman became the new Africa Boxing Union (ABU) featherweight champion after defeating Kenya’s Michael “Shaka” Nyawade via technical knockout in round 10 of their 12-round contest.

Back in December 2015, Usman lost to Uganda’s Edward Kakembo for the ABU title.

In the national lightwweight title fight, best boxer at the GOtv Boxing Night 13, Rilwan “Real One” Oladosu secured a technical knockout win in round seven against Kehinde “Ijoba” Badmus to claim the belt.

As usual at the GOtv Boxing Night, 50 decoders were given to 50 lucky fans through a raffle draw.