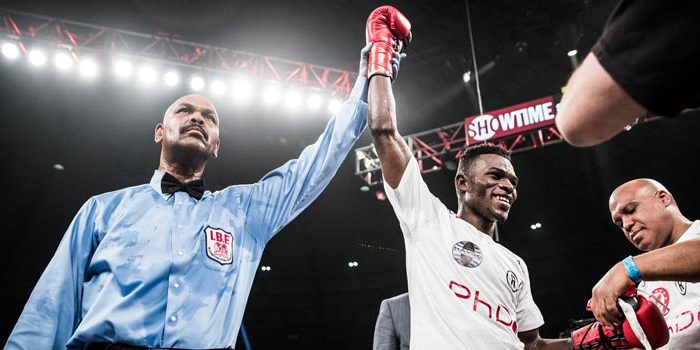 After bouncing back from consecutive, controversial split decision defeats, Richard Commey is looking ahead to securing another crack at a world lightweight title in 2018.

Commey lost a disputed decision to Robert Easter Jr. when the two fought for the vacant IBF world lightweight strap in September 2016. Two month later, the Ghanaian dropped another head-scratching loss, this time to Denis Shafikov in Shafikov’s native Russia.

Commey returned to the ring in March 2017, winning the WBC international silver belt with a 12-round unanimous decision win over rugged Belgian Hedi Slimani. Last March, he ended a year-long layoff with the finest win of his career, stopping the previously-unbeaten Alejandro Luna in six rounds.

“I want to be a world champion and I believe that I am good enough to become champion of the world,” he declared.

“I feel that I am still an undefeated fighter as I believe I won both of the fights against Shafikov and Easter Jr,” he continued. “I want to prove to everyone that I am the best lightweight in the world.”

Commey is a hit in the US with boxing fans and pundits—both impressed by the humble, hard-hitting boxer. Now based in Brooklyn, New York, Commey opened up regarding training and future plans.

“I’m enjoying training in Brooklyn alongside the likes of Danny Jacobs and Sadam Ali. To be able to share a gym with two world champions and all learn from each other and learn from our coach Andre Rozier is a blessing.

“Brooklyn is a great place as is the entire New York. I feel at home there and I feel very blessed to be given the opportunity to train in Brooklyn with such good people and alongside fantastic fighters.”

The IBF mandatory challenger continued, “My manager, Michael Amoo-Bediako, has been fantastic throughout my career and my promoter Lou DiBella wants to see me in big fights. I would like to fight Robert Easter Jr again and show once and for all that I am the better fighter and become champion of the world.”

“If Robert’s team do not want to fight, then I’ll happily face any of the world champions. I am never in a bad fight and I want to give the fans value for money every time I fight. The better the opponent, the more exciting Richard Commey you will see!”