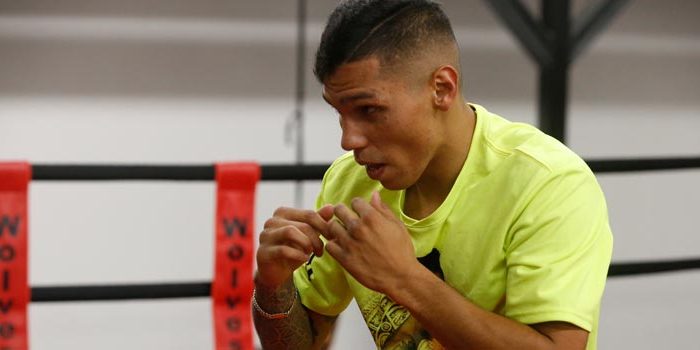 Also participating in the workout was former world champion Anthony Dirrell and El Paso’s Abraham Han, who meet in a 10 round super middleweight clash, and featherweight brawlers Jorge Lara and Claudio Marrero, who compete in a 10 round fight.

Tickets for the show, which is promoted by TGB Promotions, are on sale now and can be purchased through Ticketmaster.

Here is what the fighters had to say Wednesday from Wolves Den Gym in El Paso:

“Having Robert Garcia in my corner has given me the training and preparation of an elite fighter. It’s a big difference. He’s one of the best trainers in the world and I’m going to help show that on Saturday.

“I’ve been training with Robert for quite some time now. I’ve been getting sharp working with other elite fighters in the gym. It’s kept me on my toes and that’s what I needed.

“Cruz is tough, he’s undefeated and he comes focused to win. He’s a good fighter but I’m here this week to prove that I’m a better fighter.

“Experience will definitely play a big part. But I also don’t think he’s faced anyone with the skills I have. All of my losses are to great fighters. I feel like I’ve taken a big step forward here.

“It feels great to be headlining in El Paso on FOX and FOX Deportes. I bring exciting fights and I’m always in wars. Saturday will be no different.

“I’m really excited to finally be fighting in Texas, it’s something I’ve looked for and asked about for many years. Texas holds a big piece of my heart and I’m ready to give the fans here a show on Saturday.”

“This was an excellent training camp. It was a hard camp. It was extensive but I got through it and it has me feeling very prepared. It was absolutely the most strenuous camp I’ve had. I always train hard, but this one in particular, I had extra motivation.

“To get the win I need to use my jab and work the body. There are more aspects of it, but those two things are essential for me winning this fight.

“I’ve fought a lot of good, young, strong fighters recently. Past a certain level you learn that you can’t just knock everybody out. You learn to weather the storm and use your energy more efficiently. I’ve learned a lot about myself as a fighter.

“It feels great to be on this stage, but at the same time I know I earned my spot to be here. I remember watching Josesito fighting in 2011 on the Mayweather vs. Ortiz undercard and I knew right then that I was going to be in the ring with these guys.”

“I had a great, eight-week long training camp with great sparring. I feel good and I’m ready to fight for sure.

“I know that Han is a warrior. He’s rugged and that’s why I chose to fight him here in his backyard. I know that he’s going to bring a fight for me.

“I just need to stick to what we worked on in training camp. We have to implement those strategies and you’ll see it come Saturday night.

“I’m a better, stronger and wiser fighter these days. I’ve been through a lot to stay in world title contention. Everybody knows how badly I want my title back. On Saturday, everyone will see that I’m a champion. I’m ready for anyone with a belt.”

“I’m so happy to be fighting at home on this big stage. In many ways this is a dream come true and something that’s been a long time coming. I can’t wait to perform in front of my people.

“I know I’m the underdog versus Dirrell but that doesn’t bother me at all. I always train to be better than anyone expects me to be. This fight will be no difference.

“This is a big fight for me and I’ve been training so hard to put on a great show for my hometown fans. This is a great fight town and I’m going to give the fans something to cheer about.”

“I’m so excited to get in the ring. I’m still eating right now leading up to the weigh-in and I feel ready to go. I’m eager to step into the ring.

“I’m not worried about Claudio Marrero. I’m just staying loose and focused on what I have to do. Marrero has to focus on me because he’s never fought a guy like me. I’m going to stay loose and bring the fight to him.

“The world title is my destiny. This is one shot closer to a world title. I’m highly ranked but the champions don’t want to give me a chance. So I will have to fight my way there.

“I’m like a dog going after a bone in the ring. I just want to fight. I’m here to take the fight right to him.”

“It was a very hard training camp like always. I take it very seriously and I’m ready for this fight on Saturday night.

“I know I’m facing a tough Mexican fighter who will leave it all in the ring. We worked very hard on a plan for him.

“He must be mistaken if he thinks I’ve never seen a fighter like him before. It’s the other way around. He’ll definitely know what level I’m on after Saturday night.

“My style is to both come forward, but have the ability to move backward. It’s all about what the fight dictates and what my corner wants.