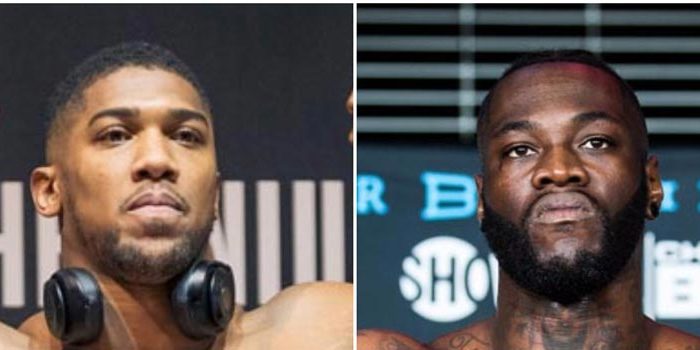 It’s the hottest debate in boxing and perhaps the most polarizing. From street corners to social media, everyone is asking: Who do you support, Anthony Joshua or Deontay Wilder?

This question has a special meaning for African boxing fans.

Joshua was born Anthony Oluwafemi Olaseni Joshua to Nigerian parents. Some believe that because the reigning WBA/IBF/WBO world heavyweight champion was born in England and represented them at the Olympics, where he won gold, he is not a “real African.” But that’s a stretch.

Joshua spent most of his formative years in Nigeria. And he represents them with pride, having tattooed the continent and Nigerian symbols on his body, often making his ring entrance to the sounds of Naija music and announcing that the secret to his success is eba and egusi, staples of the Nigerian diet.

This may be viewed as token gestures, but no one is forcing him to do so. He is making a concerted effort to show the world what culture he identifies with and should be applauded for it.

America’s Wilder was born in Alabama, a state with a long-standing history of racism and harsh treatment toward Blacks. He represented the U.S. in the 2008 Olympics, where he won bronze, hence his nickname “The Bronze Bomber.”

But the WBC world heavyweight champion has always identified with the Black struggle, speaking out against mistreatment and even pleading with Joshua to leave his promoter and promote himself because, according to Wilder, “Eddie Hearn [Joshua’s promoter] is just another White man trying to milk the Black man.”

Wilder isn’t all lip service. In 2017, he visited countries in east Africa to identify and understand the culture. This wasn’t made known to the media. He returned to the U.S. a changed man, growing out his hair and speaking on behalf of African-Americans, much to the ire of media members. Against Ortiz, he was spotted wearing a “King of Wakanda” shirt in the dressing room, a reference to the Black superhero movie, Black Panther.

The similarities in the movie are striking. Joshua, like the Black Panther of Wakanda, has been blessed with his nation’s genetics. The Black Panther was willing to help Western countries and to protect his own nation of Wakanda.

Wilder is similar to Erik Killmonger, the African-American of Wakanda descent who attempts to take over the country because he is displeased with Wakanda leaders willing to work with Whites yet showing a lack of empathy for the struggle of other Blacks worldwide.

The battle between Joshua and Wilder is the biggest that can be made in the sport of boxing today. But no matter what side you’re on, please remember that Africa will emerge as the victor either way. After all, both are her children. One just left earlier than the other.