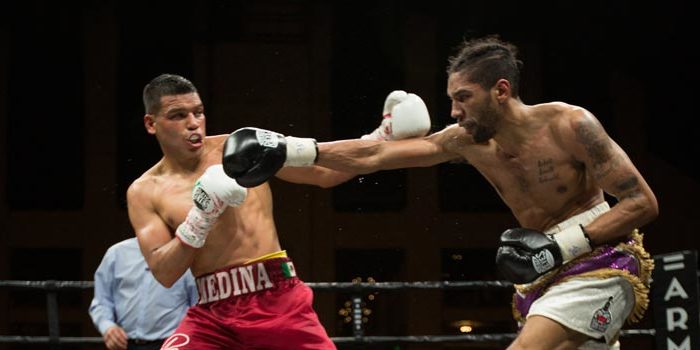 MINNEAPOLIS (April 14, 2018) – Welterweight contender Jamal James (23-1, 10 KOs) earned a hard-fought majority decision over Abel Ramos (18-3-2, 13 KOs) in front of his hometown fans Friday night in the main event of Premier Boxing Champions on FS1 and FOX Deportes from the Armory in Minneapolis.

“It feels so great to get this win in Minneapolis in front of all of my people here,” said James, “Ramos was a tough opponent who gave me a great challenge, but I was able to keep my composure and give the fans a win.”

James used his 6-foot-2 frame and reach advantage to beat Ramos to the punch in round one but was clipped in round two by a left hook from the game Ramos that had the local favorite in temporary trouble and on the defensive.

The Minneapolis-native was able to regain his composure and return to the offensive as he poured right hands behind a strong jab along with movement that made it difficult for Ramos to land cleanly. Ramos continued to charge forward however, emphasizing body shots that slowed James down and allowed him to win rounds.

“I had to dig down tonight, but I think it was a good fight for me to grind out,” said James. “I’m going to keep getting better and I hope to have a chance to display my talents at home again. I know if I keep working, I’m going to get a chance to prove myself against the best out there.”

James was able to send the hometown fans happy after 10 rounds, with judges giving him the majority decision by scores of 95-95 and 96-94 twice.

Galarza controlled the early action with his jab and a powerful right hand that appeared to have Cherry stunned in the first round. His length advantage was key until Cherry was able to establish position on the inside.

Cherry began to land several powerful shots on Galarza with both hands in the middle rounds, backing Galarza up and taking away much of power on his shots. Galarza tried to back off and box Cherry more down the stretch, but was unable to avoid the oncoming Cherry as often as he needed.

In a battle of unbeaten prospects, Chris Colbert (8-0, 2 KOs) scored a TKO victory over Austin Dulay (11-1, 8 KOs) after seven rounds of lightweight action.

Colbert was first to the punch from the outset, landing straight right hands cleanly before flummoxing Dulay by switching to the southpaw stance. Colbert scored a knockdown in round six with a combo punctuated by a powerful body shot. After a dominant seventh round, referee Mark Nelson stopped the fight after checking on Dulay in his corner.