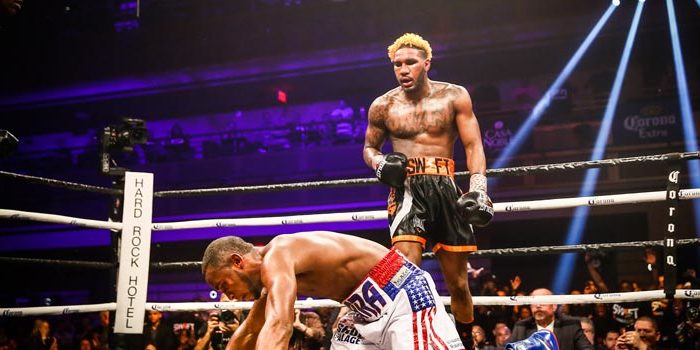 LAS VEGAS – Jarrett Hurd unified the 154-pound division with a 12-round split-decision victory over Erislandy Lara in an all-action fight Saturday on SHOWTIME before a sold out crowd of 2,579 at The Joint at Hard Rock Hotel and Casino in Las Vegas.

Hurd (22-0, 15 KOs), who entered as IBF Champion, dethroned WBA Champion in just the seventh unification in division history. The difference in the Fight of the Year candidate was a short left hook that floored Lara in the final minute of the fight. Had the 27-year-old Hurd not scored the knockdown, the fight would have been ruled a majority draw. 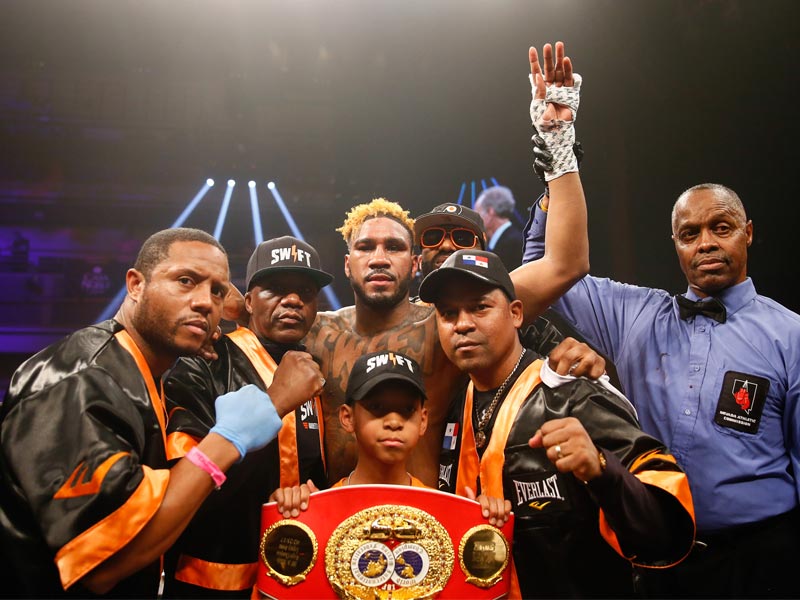 “It was a tough one, but I went out there and did exactly what I said I was going to do – fight all 12 rounds and get the victory,” Hurd said. “I didn’t feel like that (I needed the knockdown). I feel like I was in control the whole fight, applying the pressure.

“I don’t think it had anything to do with age.  I think it was me and the game plan we had to apply the pressure.”

Hurd applied relentless pressure from the opening round, pressing forward against the crafty southpaw. He pounded the body, yet often neglected defense and ate punishing counter shots for 11 rounds. But the difference for Lara (25-3-2, 14 KOs), who was making the seventh defense of his title, was the brutal 12th round. With blood seeping from a swollen right eye, Hurd connected on a short left hook that floored Lara for the first time in nearly five years.

“It was a great fight for the fans. I stood there, fought and it was fun. I thought I clearly won the fight. Once again a decision goes against me, but hey we just have to do the rematch.”

Entering the fight, Charlo was the consensus No. 1 fighter at 154-pounds. He stated his case for a chance to unify against Hurd.

“I’m down.  Let’s go.  We want that work,” Charlo told SHOWTIME CHAMPIONSHIP BOXING host Brian Custer. “I feel Hurd only took the fight with Lara because he realized the harder fight is with Jermell Charlo.

“We’ve been there before with Lara.  I know what he possesses.  Hurd has to get his defense together because he cannot get hit like that by me.   Lara doesn’t move like he used to.  If he moves like he used to he wins that fight.”

James DeGale earned back the IBF Super Middleweight World Championship with a unanimous decision in a rematch with Caleb Truax, taking back the title he lost last December in the near-universal upset of the year.

“Two-time world champion. It feels great,” DeGale said. “But full credit to Caleb – he shows he can mix it with the top fighters.

“I’m just happy that I’m a two time world champion and I got my IBF world title back. I’m back, Team Chunky, we’re back. Two-and-a-half years I had it and I lost it to Caleb. He embarrassed me, but we’re back.”

DeGale (24-2-1, 14 KOs) overcame a massive cut from an accidental head butt in the third, which was mistakenly ruled as the result of a punch from referee Robert Byrd.

“I couldn’t see from my right eye, DeGale said. “I like Robert Byrd (referee), but today he was a bit wrong. I couldn’t see. But I’m just glad I got through it. I showed some heart. In my last fight, I was like a weak little kid.”

DeGale connected on 37 percent of his power shots compared to 28 percent for Truax. He now returns to London a world champion with some massive potential fights in the future.

“I want to be busy,” DeGale said. “I have a couple years left in this sport.”

Truax (29-4-2, 18 KOs), who fought for the first time as a world champion, was disappointed and advocated for a rematch after the scores were announced.

“I gave him a rematch straight away so why not do it again.”

Williams (25-1-1, 15 KOs) set the pace with a strong left jab in the opening rounds of the fight, keeping Gallimore at bay and the action on the outside. That changed around the fifth round as Williams abandoned the jab and the fight moved to the inside. Williams had his best round in the 11th, connecting on a massive left hand that set up a barrage of combos that nearly had Gallimore out on his feet. Gallimore (20-2-1, 17 KOs) survived the round, and Williams wasn’t able the finish him in the 12th, but it was clear Williams deserved the decision.

“I wasn’t surprised a judge had a draw,” Williams said. “Sometimes when you’re fighting real close like that, it is hard for judges to score. I knew I won. Once I heard 116-112 and 117-111, I knew I won because I knew he didn’t win eight rounds.

“The hits to the body was all in the game plan. You have to go to the body in a 12 round fight.”

“I didn’t really think I won the fight,” Gallimore admitted. “I just let too many early rounds go. I just gave him too many rounds. I had him hurt a couple of times, but he was tough. I should have done more combinations. I will look at the fight and review it, and will make adjustments.”