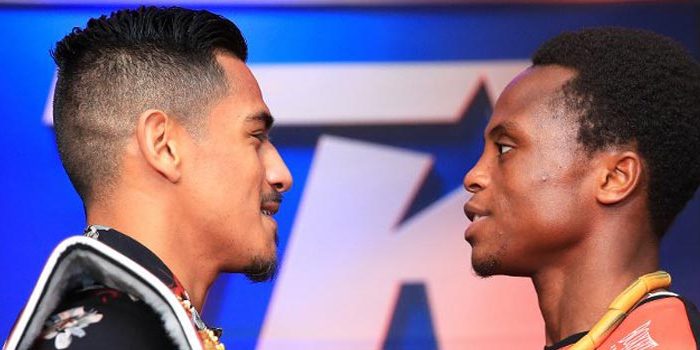 The verbal haymakers were flying Thursday afternoon as World Boxing Organization (WBO) junior featherweight champion Jessie Magdaleno and No. 1 contender Isaac Dogboe faced off at the final press conference for their world championship main event, Saturday at The Liacouras Center.

Magdaleno vs. Dogboe headlines a card with plenty of Philadelphia flavor. Amateur rivals Bryant ‘By-By’ Jennings and Joey Dawejko square off in a 10-round bout to decide Philadelphia heavyweight supremacy, while Jesse ‘Hollywood’ Hart, son of Philadelphia middleweight legend Eugene ‘Cyclone’ Hart, continues his march to another super middleweight title shot against Demond Nicholson in the 10-round co-feature.

Magdaleno-Dogboe, Jennings-Dawejko, and Hart-Nicholson will be televised LIVE on ESPN and stream in English and Spanish on the ESPN App at 7 p.m. ET. Undercard bouts will stream live on ESPN+, available on the ESPN App, beginning at 4 p.m. ET. ESPN Deportes will air the fight at 10 p.m. ET.

Dogboe heated things up when he called Magdaleno “the worst world champion ever” before questioning whether he could make the weight.

“You look worse than me,” Magdaleno responded. “You look like an alien.”

Dogboe mentioned that Magdaleno had blocked him on Facebook when the fight was announced.

“I guess I send shivers into people’s spines,” Dogboe said.

“I can’t beat him any uglier than he already is,” Magdaleno said. “He’s dog ugly. Come Saturday, we’re going to give him the name that he deserves…. the ugly Dogboe.”

Then, things got really personal.

“When I knock you out cold, that’s when I’m going to feel really sorry for your son, your little son, because he’s going to be crying seeing his father {knocked out} cold,” Dogboe said.

“Don’t bring my son into this!” Magdaleno said. “I’ll knock your ass out right now. I’ll slap the sh*t out of you.”

Said Dogboe: “Save it for Saturday.”