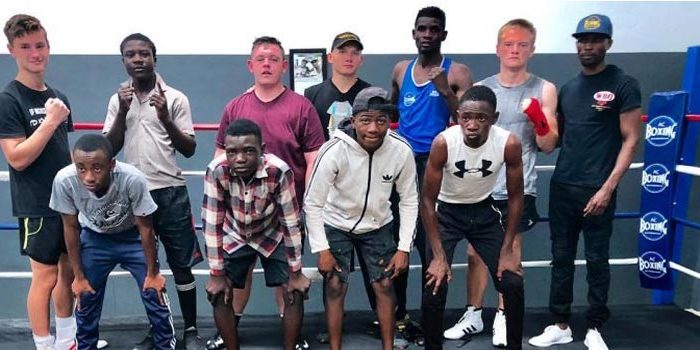 One of Namibia’s top boxing trainers and matchmakers, Imms ‘AC’ Moses, recently opened doors to his new state-of-the-art boxing and fitness gym, called AC Boxing Gym, in the capital and the reception from boxers, trainers and the general public has been overwhelming.

The newly established AC Boxing and Fitness Gym, which is the brainchild of Moses, is situated in Windhoek’s Lafrenz Industrial Area and boasts some of the latest world-class boxing equipment. And Moses has described the gym’s entrance onto the local scene as an imperative turning point in the way boxing is managed in Namibia.

Young brother to Namibia’s former world champion the legendary Paulus ‘The Hitman’ Moses, the 35-year-old Imms revealed to New Era Sport that he has invested close to N$300,000 of his personal savings into the establishment of the gym with the ultimate purpose of “creating a world-class and yet conducive environment for local boxers and trainers”.

As Imms explains, the three professional boxers (Indongo, Ambunda and Lukas) are all still signed with their respective promoters and only signed with AC Boxing Gym strictly for training purposes and not promotion.

Indongo is still signed with American-based DiBella Entertainment, Ambunda is still promoted by Salute Boxing Academy (SBA) and Lukas is still under the banner of MTC Sunshine Promotions of Nestor Tobias.

“And it should be clear that we strictly sign up boxers who want to train with us and believe they can grow as champions under our care. I do not promote boxers but only train them and polish their skills before linking up with whatever promoter that has the capacity to give them top fights. Namibia is blessed with talented boxers that have the potential to scale to greater heights but the biggest problem has always been a lack of well-equipped facilities for training and preparation.

“That’s why I decided to come on board and close that gap with AC Boxing and Fitness Gym, which I strongly believe is the future of Namibian boxing. My goal is to accord boxers and trainers a conducive environment to operate from. Also, it’s important to mention that with the opening of this gym, local promoters will now have ample time to give their full attention to promoting fights and leave the training of boxers to us here at the gym, as opposed to promoters training fighters and promoting events at the same time,” said Moses, a former associate of prominent trainer and promoter Nestor Tobias.

The gym has different time slots from training and sparring sessions, with activities starting at 08h00 until 19h30 every day and boxers are grouped and managed according to their age, needs and as per the time slots. Members of the general public are also welcome to make use of the gym as the facilities available can cater for the needs of everyone, not just boxers.

“We want to work with everyone and anyone who has boxing development at heart. That’s why you see that our gym houses boxers from different promotions. That’s how I want things to be; people working together in peace and putting the boxers first in whatever we do. I will be working with Nestor Tobias, Kiriat Kamanya, Kinda Nangolo and Anita Tjombe as well as any promoter who believes that there is talent in our gym and he wants to help promote that talent. AC Boxing and Fitness Gym is for every Namibian because at the end of the day is about making the sport of boxing the winner,” added Moses, who was last year appointed as global matchmaker for the Indian Professional Boxing Association (IPBA).

On what inspired him to set up his own gym, Moses said he was inspired by American legendary trainer Floyd Mayweather Sr, who is the father of Floyd Mayweather Jr, a multiple former world champion who held titles in five different weight classes before retiring with an undefeated record of 50-0 last year.

“They say if you don’t travel to gain exposure to new things and meet new people, you will never do things differently. Over the last few years, I travelled to America where I spent a lot of time at the Mayweather Boxing Club in Las Vegas and there I learned a lot from Mayweather Sr, who told me how to train and work with a boxer and also how to generally set up and run a successful boxing gym. He (Mayweather Sr) is a very passionate man and always willing and ready to share knowledge. In fact, he is the one who gave me the name African Connection ‘AC’, as he grew fond of me and was impressed by my love and passion for boxing because we would spend hours talking about the finer points of boxing and compare boxing in Africa and how things are done in the US. He is my inspiration,” concluded Moses, who said he habours no ambitions of becoming a promoter but would rather spend his time and energy honing the skills of upcoming fighters.