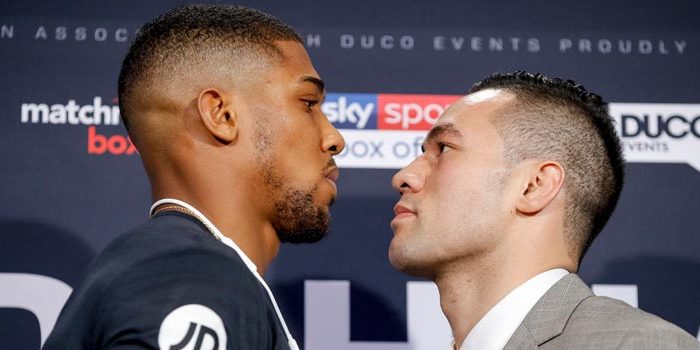 The British sensation Joshua (20-0, 20 KOs) owns the IBF and WBA titles, while New Zealand’s Parker (24-0, 18 KOs) is the reigning WBO Champion.  The two will meet on Saturday in just the 11th unification in heavyweight history in front of what is expected to be nearly 80,000 boxing fans at the national stadium of Wales. 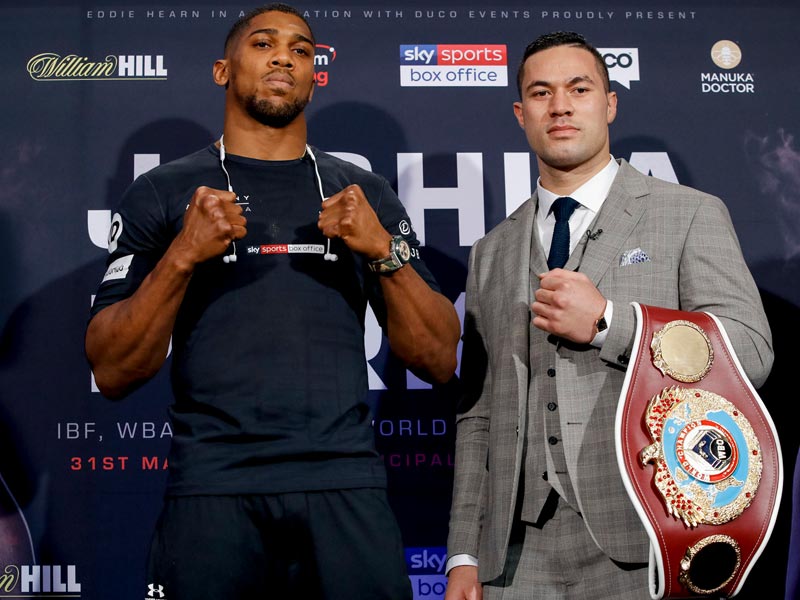 Here’s what the fighters had to say at Tuesday’s press conference.

“I feel like this is what we have to do.  If champions don’t face off, then we won’t bring excitement to boxing, and I feel like we heavyweights are the flagbearers for the sport. 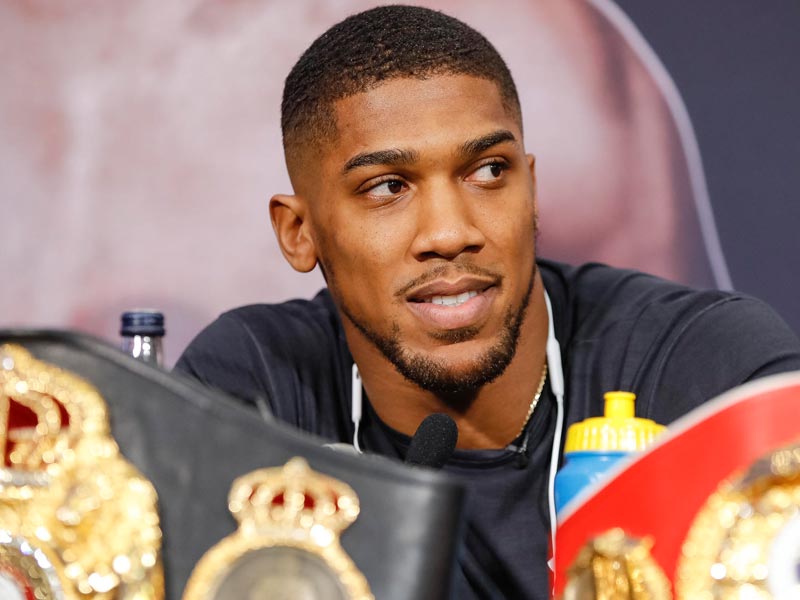 “I’m peaking, but what I need to do is remain where I am.  If you want to see my peak then I need to face stern challenges.  The better opponent, the better I get.

“We embrace the challenge of facing an undefeated champion.  He’s a champion, he’s done well for himself.  He’s quick and he can take a punch.

“For a long time, I’ve had to rely on my strength and my physicality. Over the 10 years I’ve been boxing, I’ve built a lot of mental strength as well.  And now I’m combining the two.  I feel confident and I’m looking forward to the challenge.

“I take it one thousand percent one fight at a time. A lot of talk has been happening about AJ vs. Deontay (Wilder).  People need to be realistic.  I’m looking at Joseph Parker, who is a lively challenger.  He’s a champion for a reason.

“Let’s say we look into a crystal ball and I’m victorious, then we can start talking about future plans.  But, for now, my future starts on Saturday.  That’s where I’ve got to look to and not really beyond that moment.

“There’s definitely a fear of losing because it keeps me going.  I have to make sure I stay focused on the task at hand.  The fear of losing keeps me motivated because I know how quickly the tables can turn.  One minute you’re the man and the next you’re not.

“I’m definitely preparing for a 12-round fight.  One hundred and ten percent.  It isn’t a problem to go the distance.  But let’s say I’ve got 20 quid in my pocket and I’m looking at Joseph Parker vs. Anthony Joshua. I believe Anthony Joshua will knock Joseph Parker out, myself.”

“I feel ready, confident and sharp.  I feel better than ever, and I’m taking these belts back to New Zealand. 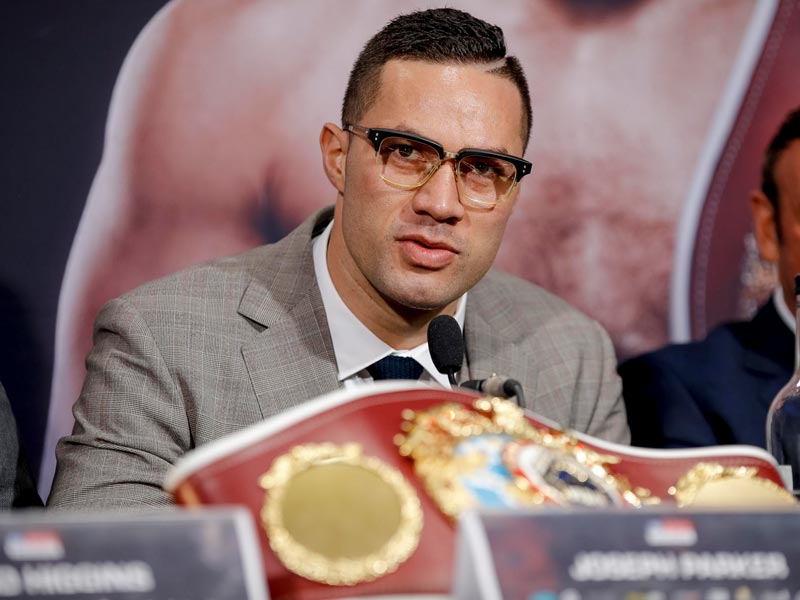 “I see Joshua as a great champion.  The reason why we wanted this fight is because we respect what he’s achieved in the boxing world.  We respect his team and what they’ve been able to achieve on this side of the world.  And we love challenges.  We see him as a big challenge and that’s the reason we want to fight him.

“He’s at his best. I’m at my best.  This is the perfect time for the fight.  There are going to be no excuses.  Whoever wins is the best on the day.

“I’m going to beat Joshua. I haven’t decided how I want to beat him yet. I don’t know if it’s a knockout or if it’s points or decision. We’ll see how I feel on fight night. But I’m going to be undefeated going home with the belts.  These are mine.

“I’m in the best shape ever.  Whoever wins is the better man.  There’s no excuses on my side.  I’m feeling great, I’m feeling strong and I’m going to leave it all in the ring.  I’m punching hard, I’m punching with way more speed so I’m looking to put on a display.

“This is the perfect time because he’s undefeated.  He’s got belts that I want.  We’re both at the top of our game now and it’s a good time to see who the best is.

“Parker is a different opponent than Takam or Klitschko.  He’s undefeated, so he doesn’t believe he can lose. But being fast and being calm and relaxed doesn’t prepare you for getting into a ring with Anthony Joshua.  Not just the size of him, he’s very imposing in the ring, but he hits you and you don’t know where you’re getting hit.  I think we’ve seen that in all of his contests to date. 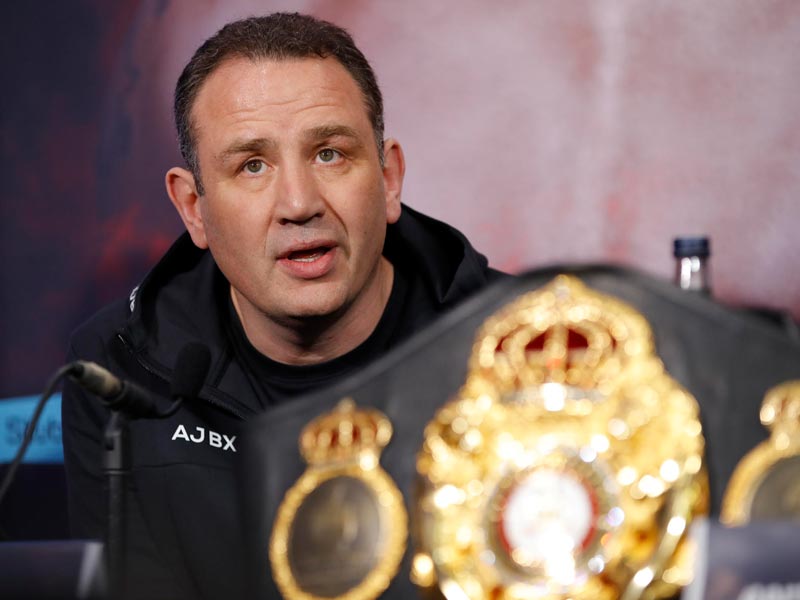 “Anthony’s in great shape. He’s looking forward to the fight and he just sees it as another fight on the ladder to trying to become the undisputed champion. That’s the reason why the fight is taking place.

“Parker’s the WBO champion. He’s a good fighter. He’s unbeaten and he’s a challenge that AJ is up for.

“These are two guys that are young, two guys that are at the top of their game.  Usually, when you have two very skillful, undefeated fighters in the ring together it will come down to who can execute the game plan the best on the night.  I’ve said all along that I believed out of all the heavyweight champions, that Joseph Parker has the best skill.  I believe he can do more. I believe he has the fastest hands. On Saturday night, we’ll find out whether I’m dreaming or whether I’ve been right all along.

“I think we’ve had our best training camp, and I know trainers say that all the time but over the last two years, we’ve had a really rough time with Joseph’s elbows.  I think it’s shown in his performances.  We’ve had a couple of surgeries just prior to Christmas last year. This camp, 11 weeks in Las Vegas, have been the most enjoyable time that Joe and I have spent together in the five years that we’ve had.

“We decided right from the get-go that we were not going to let the occasion beat us.  One of the huge strengths of Joseph Parker has always been the way he controls his emotions. I’ve said on several occasions, whether it’s 800, 8,000 or 80,000, it will be the same Joseph Parker smiling all the way to the ring.  Joseph has wanted this challenge for so long, an opportunity to prove that he is the best heavyweight in the world.  Obviously, we believe that he beats Joshua or otherwise, we wouldn’t be here.”