Namibia’s most decorated boxer, Paulus “The Hitman” Moses, will get another chance to clinch a world title when he steps in the ring with Ray Beltran on the February 16th for the vacant WBO World lightweight title. 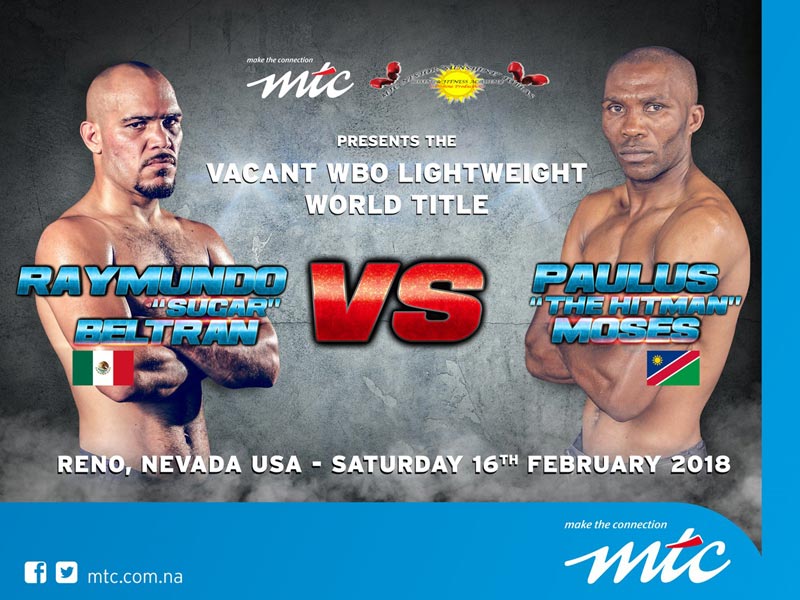 The title, previously held by Terry Flanagan from the UK, became vacant at the recent WBO Convention when Flanagan announced that he was moving up in weight. Beltran, who was ranked #1, was already declared a mandatory to face Flanagan before this development.

“I am happy to confirm that MTC Sunshine Promotions and Top Rank has signed a deal for this fight,” said Nestor Tobias. “Both Beltran and Moses are experienced contenders and we know this is going to be a great fight wherever it takes place in the USA.”

Moses was ranked #3 and holds the current WBO Africa Lightweight title. This is a wonderful opportunity for him to become a world champion again. Moses won the WBA Lightweight world title in 2009 to become Namibia’s second world champion when he defeated Japan’s Yusuke Kobori in Yokohama. He then went on to successfully defend his title twice.

In 2012, he stepped into the ring against Ricky Burns for the WBO Lightweight title which he lost on points after a close fight. He boasts an incredible record of 43 fights, 40 wins, with 25 coming by KO and only 3 losses. Moses was recently inducted as an MTC Sports Legend at the recent MTC NSC Sports Awards.

Raymundo Beltran is a Mexican boxer based in the USA and is promoted by Top Rank, the world’s biggest boxing stable. He’s already had two cracks at the world title. In 2013, he drew against Ricky Burns and lost against Terence Crawford in 2014 for the same title. Beltran is an experienced fighter with a record of 42 fights, 34 wins, 7 losses and 1 draw.

“I would like to thank God for this amazing opportunity,” said an excited Moses. “I have had a blessed boxing career and all thanks to everybody who supported me over the years. Thanks to my Promoter and mentor Nestor Tobias and to an amazing forward looking visionary sponsor in MTC who continues to push us to become only the best. It’s been an incredibly few months, I was recently inducted as an MTC Sports Legend, the highest sports honour in the country, and now this opportunity.

“Beltran is a respectable opponent, but I will travel the USA to win. I know this fight means a lot to him, but it means a lot more to me and my country, so I am not going to the US to participate but to win. I know how it feels to be a world champion, I have been there before, and I am at my best when I fight away from home, especially for a world title.

“I look forward to the 16th Feb, because Moses will become the new world champion once again. I am going to fight like this is my first and last fight, because it means everything. I was born a champion and will die a champion, I will be ready for Beltran and I will bring the title back to Namibia. I know it is going to be a tough fight, but we know how we will approach the fight.

“I’m excited about this fight for many reasons. I’m fighting for myself, for eighteen years I have worked to become a world champion,” said Beltran. “I am fighting for my family, my wife, and for my children to be proud of me. When you’re a champion, you are a champion forever. I am fighting for my team, the people who have been with me from the start. It’s easy when you are on your way up to have fans, but my true fans have been with me at my lowest, and stayed through my highs in life. This fight means everything to me, a victory will also seal my green card. For me to be world champion, and a citizen of this country, this is my dream.

“I respect my opponents always, but this is my destiny, and no man will get in the way of that. I’m ready to prove to everyone that I am the most dangerous lightweight in the world. I’m coming Feb 16th to take what was mine in Scotland, and when I leave Reno I am leaving as the WBO champion.”

“First, I would like to thank my amazing and hardworking coaching staff without whom this success would not have been possible,” said Tobias. “This is an incredible opportunity for Moses and one that has sentimental value. Moses was the very first boxer I signed up when we started the MTC Sunshine Promotions and he became the Academies first world champion. His continued dedication and hard work is paying off and we are all very happy for him.

“He will be facing a hungry opponent in Beltran, but I know he will rise to the occasion. He has done it before when he claimed his first world title in Japan and defended it successfully away from home and he can do it again. His preparations for the fight started in November already and we are confident that he is well prepared, fit and mentally prepared for the showdown.”

“Our investment in boxing, particularly in the MTC Nestor Sunshine Promotions, has yielded world class results far beyond our expectations,” said Tim Ekandjo. “The guys have been simply world class and great ambassadors for Namibia and that is because of the level of professionalism adopted in their philosophy. Come 16th February, we will as proud Namibians once again raise and fly the MTC and Namibian flag high as we invade Reno, Nevada, and as we take on another giant step to stem this beautiful country’s authority in the world of boxing and sports in general.”