Azumah Nelson Fight Night – Round 5 ought to be called “The Battle of the Undefeateds.” From the opening bout to the main event, nearly every boxer on the card has yet to suffer a loss.

Fight fans have grown accustomed to shows featuring one main event and a series of drab undercard bouts. That won’t be the case this Saturday, December 9th at Bukom Boxing Arena in Accra. Nelson, in conjunction with promoter Hemann Promotions, has delivered a card that features compelling matchups from top to bottom.

“The goal is to return Ghana boxing back to its days of glory,” says promoter Heta Hema-Mann of Hemann Promotions. “Boxing has and will always be a part of the Ghana fabric. By presenting Azumah Nelson Fight Night to the masses, we’re accomplishing our goal of giving the nation the best fighting the best. Let the cream rise to the top. That’s what we set out to do.”

“Azumah Nelson Fight – Round 5 will thrill the fans,” added International Hall of Fame inductee Nelson. “I am proud to associate my name with this series and proud of the Ghanaian boxers who were willing to step up and put everything on the line to give us good matches.”

In a highly-anticipated showdown that threatens to steal the show, undefeated Felix “Alvaro” Ajom (8-0-1, 7 KO’s) will meet Abraham Osei-Bonsu (11-2-1, 10 KO’s) for the vacant Ghana national super featherweight title. Ajom, who is trained by the renowned Lawrence Carl Lokko, says he’s tired of the talk and promises to stop Osei-Bonsu in nine rounds when they face-off.

For tickets, download the EzeePay app now and stand a chance to win a free ringside seat when you purchase a ticket for Azumah Nelson Fight Night – Round 5.  The app can be downloaded from Google Play https://goo.gl/xqSY7Q or the Apple Store: https://goo.gl/zR4JuR 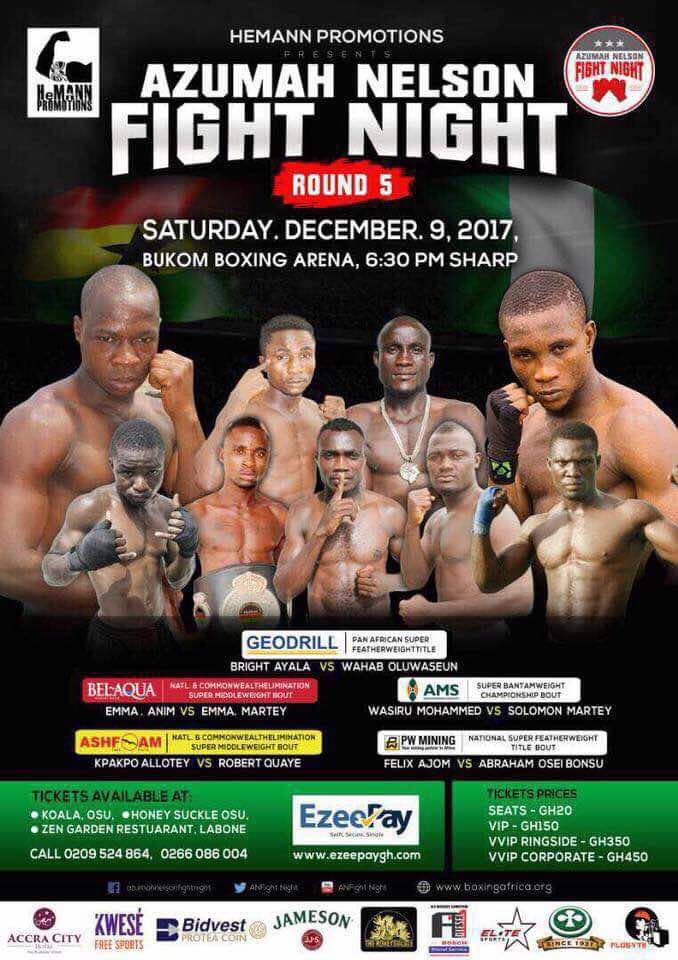