A team of Manchester boxers are on the hunt for world titles against a powerful African unit travelling cross-continents for a new pro-boxing event. Former Olympic boxer Joe Murray has been named ‘UK Team Captain’ for the unique ‘UK v Africa’ event taking place at the iconic Victoria Warehouse, in Salford, on Friday November 10. 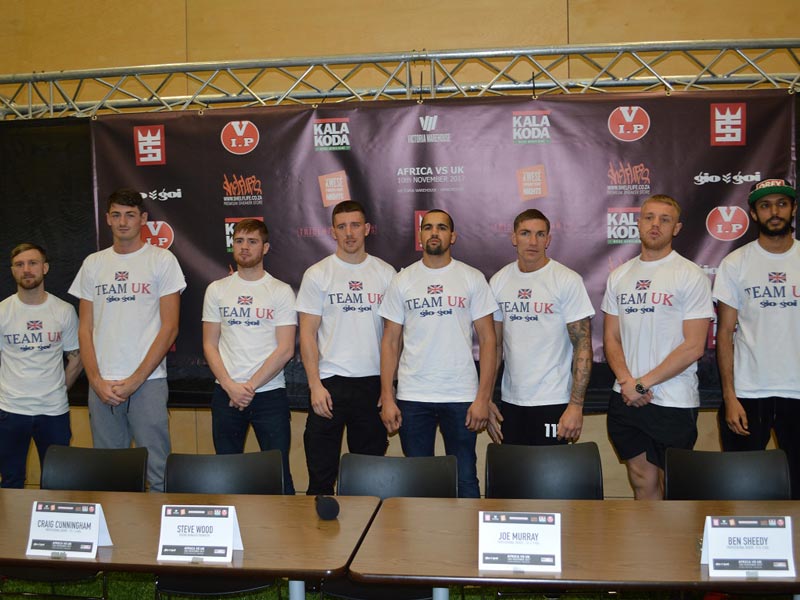 It offers a new concept in professional boxing bringing an international team element to the sport, in a similar style to Olympics for amateurs.

A total of seven fights will be broadcast live on Africa’s KweseESPN with 180 million viewers and four world titles on the line, including WBC and WBA international belts.

The event has been organised in partnership between VIP Boxing and Trident Sports from Manchester and South Africa’s Kalakoda Boxing and Kwese Sports.

Kalakoda is contracted to stage 14 shows a year with KweseESPN. The winning promoter on the night will secure the Kwese Cup which will be on the line during a return leg of the event.

The fight card is peppered with some of the brightest prospects in UK boxing who have sights set on British Titles. Team Africa includes emerging talent from South Africa, Zimbabwe, Angola and the Democratic Republic of Congo.

Speaking at a press conference at Manchester Institute of Health and Performance Murray said he expects an explosive night in Salford against an unpredictable African team possessing knock out power.

“These are 50-50 fights, everybody’s who fighting is against a kid who’s been knocking people out,” he said. “But there’s not one of us who will go in and take a beat. A lot of our lads are after a British Title, we are all trying to get to the next stage, so we are taking difficult fights.

“With other boxing shows you can call the card. With our fights you’re going down the card and no-one knows. It’s proper entertainment. These Africans are all coming with knockout power. My guy has won ten and knocked out nine of his opponents. They’ve taken the fights, so they fancy their chances. But if he wants to come and land bombs I’ll be landing bombs back.”

Murray said they have limited knowledge of their opponents. “It’s probably giving us all a little extra because in our heads we are all fighting Mike Tyson,” he said. “So, you don’t miss those runs, you don’t cheat on your meals, you don’t miss camps and you turn up to spar. I am training to be the best version of myself so if I lose there’s no excuses.

“If any of these fighters can beat us that’s their lottery ticket. If they can come away from here with a WBC Title it leads to a big money fight with someone else. That’s why we’ve got to keep switched on make sure it doesn’t happen. We are fighting against Africa and we want our whole team to win.”

Murray, who has lost just twice in 23 contests, both times at super-featherweight to Liam Walsh, has reignited his career most recently defeating Matty Fagan for the Lonsdale Belt on the Fury Parker undercard at Manchester Arena. However, he has warned his UK teammates to remain ultra-focused for a stern test.

“It’s a big opportunity to come to England and try and take the title off me but I’m ready to go, I’m in good shape going from one camp to another,” he said. “I had a couple of days off, but I kept on my diet and weight is low. I can see a path, like the end of the tunnel. I’m looking to get through this and then hopefully set up a (Lewis) Ritson fight. I’ve said before, if I can’t reach my level I’m not playing around at mickey mouse stages. I went to the Olympic Games and I wanted to be the very best as an amateur, and I want to be the best as a pro.

“I’m doing everything I can to chase down these British champions, but they keep running away. I’m willing to fight Crolla. I’m willing to fight Flanagan. Any of them who want to step up, I’ll be there in a second, don’t worry about the purse. I think I deserve a title fight, I went to Denmark and beat their prospect and since I came back I’ve been put on the shelf a bit. People say boxers are the toughest men and they will fight anyone. But a lot of the opposition I know they seem to be a bit nervous and they hide behind their promoter.

“People are saying ‘go and win fights’ but how many fights have I got to win? I’ve won 22 fights and lost to one man. The British champion has had 12 fights. People are saying I’ve got to go and get more experience, but I’m going to a fifty-year-old man with a thousand wins and two losses to one guy?”

Murray has dismissed a potential rematch with Matty Fagan who he defeated on the Fury Parker undercard. “Unless Matty brings something to the table I’m not going to keep taking backward steps. I feel like I’m everyone’s bodyguard at lightweight. Everyone who gets offered a fight at lightweight says ‘Joe do you want to fight them instead!’.

“I’ve only ever lost to one person. I want to win my own titles and move on. I’m 30-years old and not getting any younger. I don’t look at anyone and think he’s the next level. I want a title shout. I’m sick to death of waiting. If I can get some titles under me and bring a Manchester crowd (Anthony) Crolla would be a good fight, but as we saw with the Flanagan fight they are not easily made.”

“I went into that fight with confidence in myself,” he said. “A lot of people were expecting me to lose, but I went in and enjoyed it and got the result. I’m known for being a counter puncher but I can bang as well and obviously the people who have been in with me know that when they’ve been hit.

“I want the big fights and I’m after that British title. This is the first defence of my WBC title which I’ve had for a year. People have been putting out and ducking me. Hopefully this guy turns up and we can get a decent fight on the go. I’ve been in with bigger names and bigger punchers. I don’t look into records. I’m awkward as they come so they will have more trouble working me out.”

Heywood fighter Mark Thompson faces unbeaten prospect from the DRC, Emanual Kalombo, for the WBC (International) Silver Super Welterweight Title. He said: “I can’t wait, I’ve has a year and a half out and looking forward to getting back out there. The guy I’m fighting is unbeaten, but those guys are the most scared of losing so I’m looking to go in a take it from him. I’ve knocked out 17 of my opponents, that’s more fights than he’s ever had, so he’s getting a massive shock if he thinks it’s going to be an easy night. The preparation is going well. I’ve had a little time out but I’m never out of the gym and I’m always ticking over and ready to go when I get the phonecall.”

Kalombo said: “This is the opportunity of a lifetime, I have only dreamed of competing in the UK, now it’s happening. These UK boys better be ready as Team Africa is coming to win and take the Team trophy back to Africa. I’ve watched some video of Thompson on Youtube. He can fight, but I’m not worried.”

Darren Lamb VIP Boxing said: “We are delighted to be working with Kalakoda Promotions. The stage is set for a great night of boxing with four title fights and a stacked undercard. We are expecting a sell-out crowd, with many African expat communities in Manchester coming to support Team Africa.”

Saul Loggenberg Kalakoda Promotions said: “Our vision is to reposition Boxing on the continent and provide opportunities for African fighters to compete at the highest level. Through our partnership with Kwesé Sport we believe events such as these lay the foundation for a new dawn in Pan African Boxing. This format has massive legs and this is just the beginning of many exciting things we have in the works.”