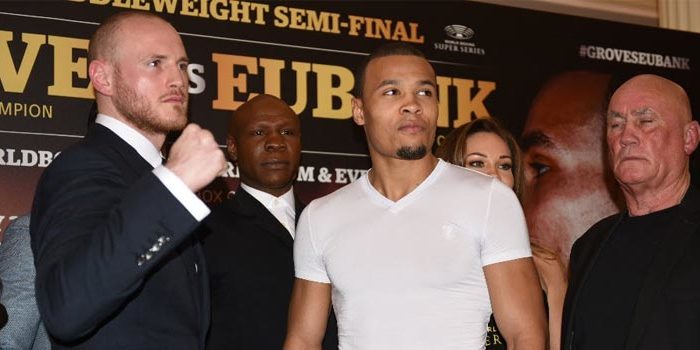 “The hype behind this fight will be huge,” said Groves at Tuesday’s press conference in London.

“I hope the fight justifies it. On paper this is billed as a 50-50 fight with Eubank Jr. maybe even being made the favourite. But I don’t really understand that.

“I think the form, the history, the experience, the ability all lie in my favour and I’m looking forward to a big night. It’s a semifinal in a tournament I expect to win so it’s a stepping stone, another step on the way for me.”

“Chris Eubank Jr. puts on a façade that he’s able to do everything himself, that he’s a one-man band. But it’s very difficult doing stuff on your own so we’ll see if he starts to make changes and adapt. He’ll have to. Obviously, this is his first really big fight, definitely at super middleweight, and I believe that he is going to fall short in a lot of categories.” 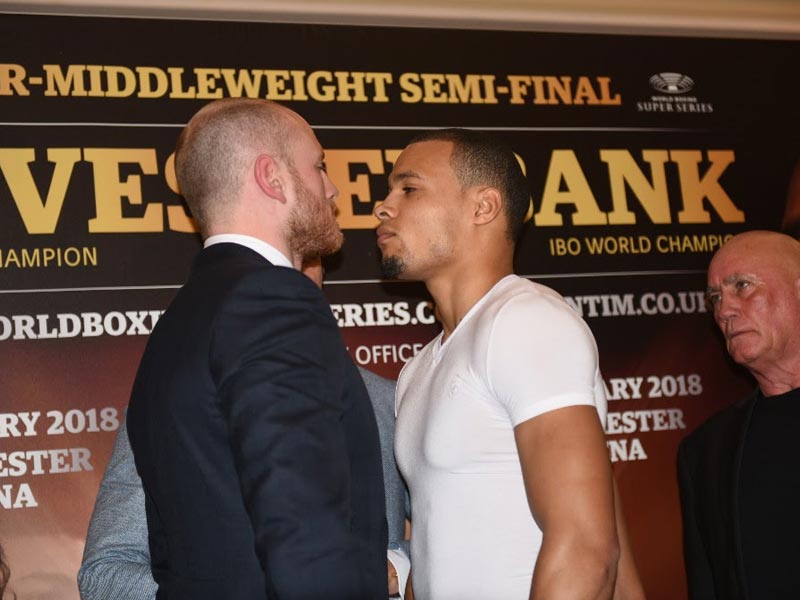 Said Eubank Jr.: “I’ve had many big fights but this is probably the biggest in terms of profile and the tournament and the hype. But at the end of the day I always rise to the occasion. The bigger the fight the better I perform.”

“George seems to be hung up on what I’ll do. He needs to worry about himself. Thinking about me isn’t going to get him anywhere. I’m a man of my word and George, you will not see the end of the twelfth round.

“He doesn’t have the speed, his defence is poor and his stamina is average at best. The fact that he’s lacking in those things means he won’t be able to compete with me. I’m not a stepping stone. I’m Mount Everest and you’re not going to climb me.”

“When we saw the original eight fighters in the line up it was a dream in the distance. But on February 17 in Manchester the battle of Britain will commence. Groves vs Eubank Jr is a super-fight that surpasses the normal standard of boxing’s big fights. It really is a mega fight.

It’ll be an enthralling build up between two unbelievable athletes, two unbelievable characters who are both great for the sport. The storyline was written by the tournament. It came alive in the hot atmosphere of Stuttgart where we saw a sublime performance by Chris Eubank Jr. and a week later George Groves took care of a very talented challenger in Jamie Cox.

It’s a fight that I’m looking forward to and I think the whole country will too. It’s the super-fight to make at the moment. The World Boxing Super Series set out to deliver these fights and now it’s happening.”

Manchester Arena, Europe’s largest purpose-built indoor arena will be at capacity to witness what promises to be the biggest Super Middleweight night in years.

“We will work hard over the coming weeks to release extra tickets to meet the huge demand of this fight,” said Sauerland.

Said Roberto Dalmiglio, Comosa’s CEO: “Already by the semi-final stage the Ali Trophy and the World Boxing Super Series brand has achieved a lot. Fans are following us in a tremendous way and here we are presenting a semi-final which is indisputably one of the best sporting events in the UK in 2018.”

The Ali Trophy super middleweight semi-final between George Groves and Chris Eubank Jr. will be live on ITV Box Office on February 17.