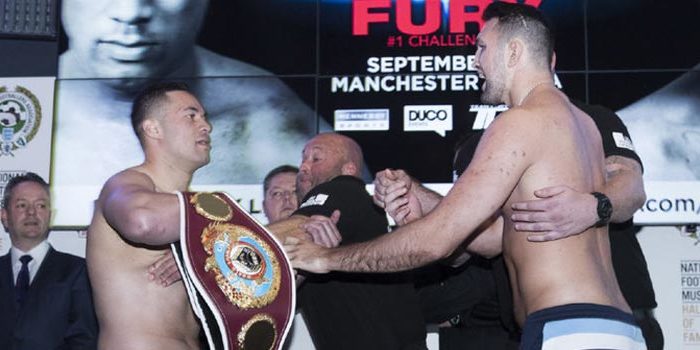 MANCHESTER, UK (September 22, 2017) – Parker-Fury is on. The eight principal fighters for tomorrow night’s Parker vs. Fury Pay-Per-View card all made weight at today'(see below). Tensions erupt when Fury pushed Parker during the traditional face-off and members of both teams went at it before security broke up the altercation.

“Parker vs. Fury”, promoted by Hennessey Sports, is presented in the United States by Integrated Sports Media and Protocol Sports Marketing, Ltd., in conjunction with an internet-based YouTube PPV that is available at www.youtube.com/parkerfury.

Integrated Sports Media will distribute “Parker vs. Fury” live in the United States on cable and satellite PPV via iN Demand, Vubiquity, Sling TV and DISH for a suggested retail price of only $24.95.

All and/or highlights of additional PPV fights will air pending time restraints.

Fights and fighters subject to change.