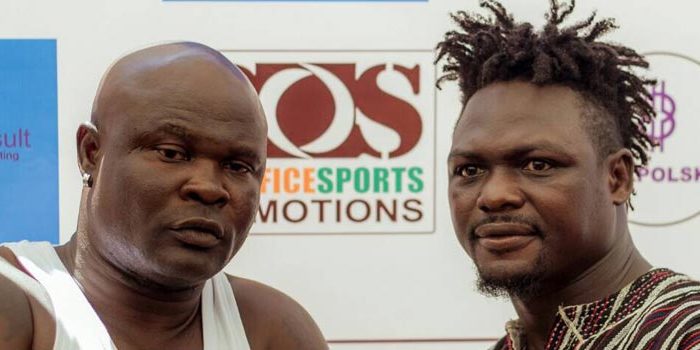 The much-anticipated bout between Braimah ‘Bukom Banku’ Kamoko and Samir Bastie has been postponed to October 21.

The bout initially scheduled for September 31 has been moved because the major TV partner needs more time to promote the fight.

An official statement from the promoter, Alex Ntiamoah of Box office promotions, reads: ‘’The Management of Box Office Sports Promotions, promoters of “MAKE OR BREAK” (BANKU vs BASTIE) fight, which was supposed to come off on September 30, 2017 at the Bukom Boxing Arena in Accra, wish to inform the Ghanaian boxing fans and the general public that the show has been postponed to October 21, 2017, at the same venue (Bukom Boxing Arena).

‘’The postponement is due to the request from a major TV partner which needs an ample time for pre-fight promotions, good planning for a world class production and programming to cover the event.

‘’We, therefore, wish to apologize for any inconvenience caused and promise to bring to the Ghanaian boxing fans and the general public the best boxing promotions for the new schedule date.

The grudge bout between Bukom Banku (Brimah Kamoko, 29-0, and Bastie Samir threaten a massive overflow of fans in the 4,000-seater Bukom Boxing Arena (Trust Sports Emporium) in Accra. This was after a record 2,000 people turned up for the news conference two months ago.

And the war of words between the two boxers has spiced things up.

Bukom Banku has said he is very optimistic of extending his unbeaten run to 30 at the expense of Bastie.

“I will knock Bastie out. He is nowhere near me in terms of quality and I don’t know why people are fussing about him. I am the President of Boxing in Ghana and that’s an undeniable fact. Many have accused me of running away from the challenge but that was never the case,” he told Joy Sports

But for Bastie, he is looking forward to handing Bukom his first ever defeat.

“I am ready for this fight. I will cause a big upset here. I urge all our fans to support us responsibly. Boxing is a gentleman’s sport and we have every reason to keep it that way. I am grateful to the fans for the big support and I need more of it as I prepare to deliver’’ He said.

Bukom Banku’s record of 29 wins with 22 of them coming by knockout has built a good image in the ring with annexing a major world title, the only element missing in his success story so far.

The Ghanaian boxer has had his fair share of chicken outs by big name boxers and champions refusing to give him a shot to challenge for the title – one of them being Nathan Cleverly. At light heavyweight, Banku annexed the Africa and the WBO Africa titles. He has also annexed the WBO Africa Cruiserweight title as well.

Samir a 2008 Olympian, Captained Ghana’s Amateur Boxing team the Black Bombers to many tournaments including the African Championships and the AIBA World Championships. He has gone 16 fights undefeated with one ending in a draw. He is yet to annex a major title.