Floyd Mayweather and Conor McGregor official kicked off fight week events Tuesday with grand arrivals at the Toshiba Plaza ahead of the SHOWTIME PPV event this Saturday, Aug. 26 taking place at T-Mobile Arena in Las Vegas.

Fighters were greeted by fans at the Toshiba Plaza before making brief remarks onstage. Here is what the fighters had to say Tuesday:

“When there’s a fight of this magnitude, it’s all about keeping composure and that’s what I do. I go out there and do my job and let the rest take care of itself. This is huge, the numbers that we’ve been hearing about, they’ve been crazy. 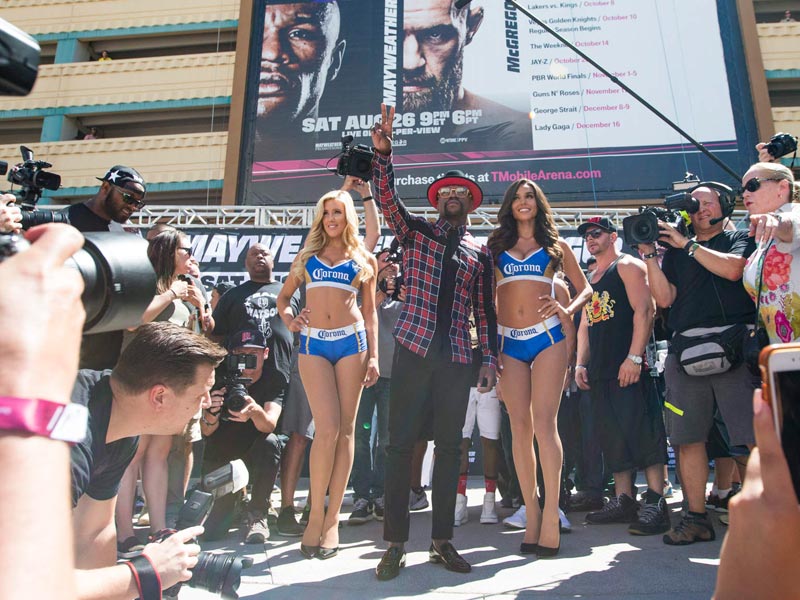 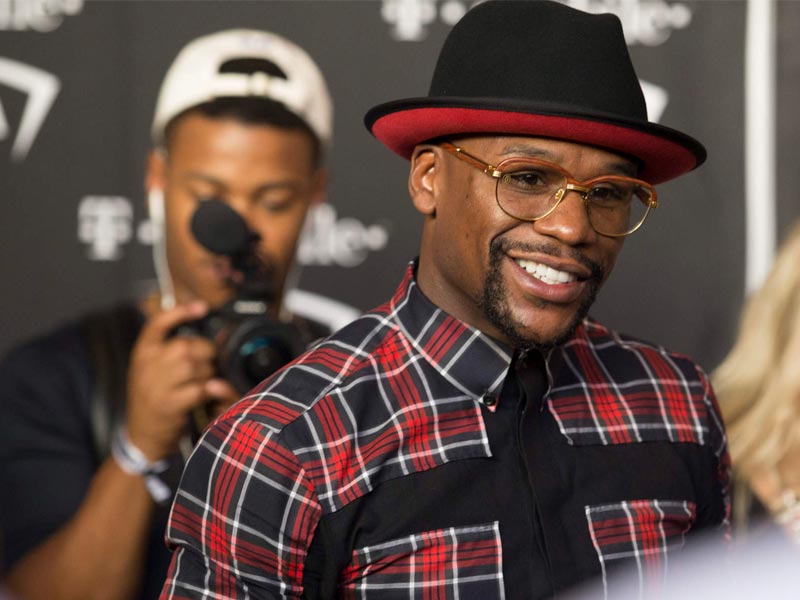 “I just go out there and fight. I don’t worry about my record. I’ve been blessed with hands and fast feet and a tremendous mind. It’ll all be on display Saturday night.

“A lot of fighters now only want the money. They don’t want to put in the hard work early in their careers. I took the long route and I’ve been here for a while. I just love the sport and competing against the best guys.

“It’s all about the future and building stars. Mayweather Promotions is the future of sports and entertainment. It’ll be a great display this week.

“I’m doing this for myself and my family but I want to give everyone a great show. Everyone deserves a good show. The Pacquiao fight wasn’t exciting enough. That was on Pacquiao, but I have to give the fans a great show this time.”

“Floyd can talk about whatever he wants to talk about. He can talk any kind of trash he wants, because he’s talking to the new God of boxing. 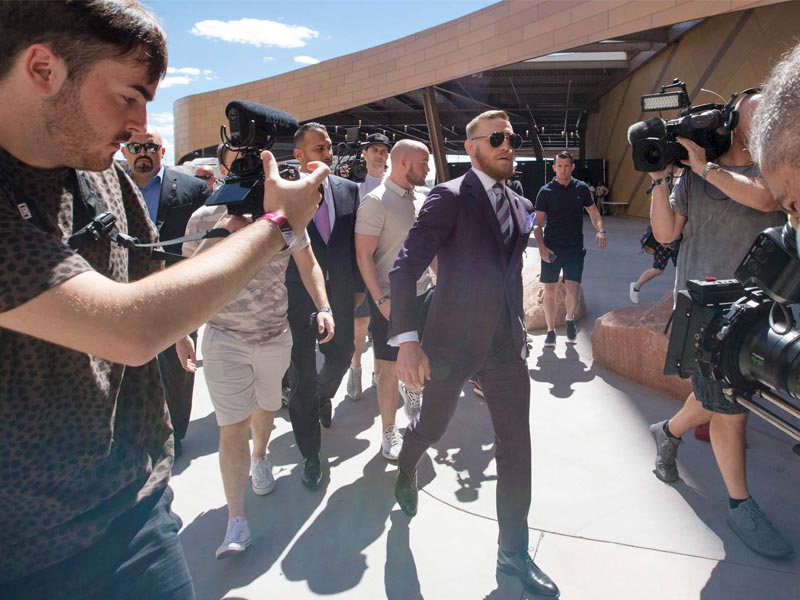 “I like the move from five to three minute rounds. I feel like I’ve built a solid engine that is going to last me through the rest of my career and help me in the fight.  We’ve put in the work. I’ve fought many 12-rounders.

“The Irish are rolling in and whenever we roll in, we take over. It was amazing to see all the Irish fans out today. It’s going to be a great spectacle. 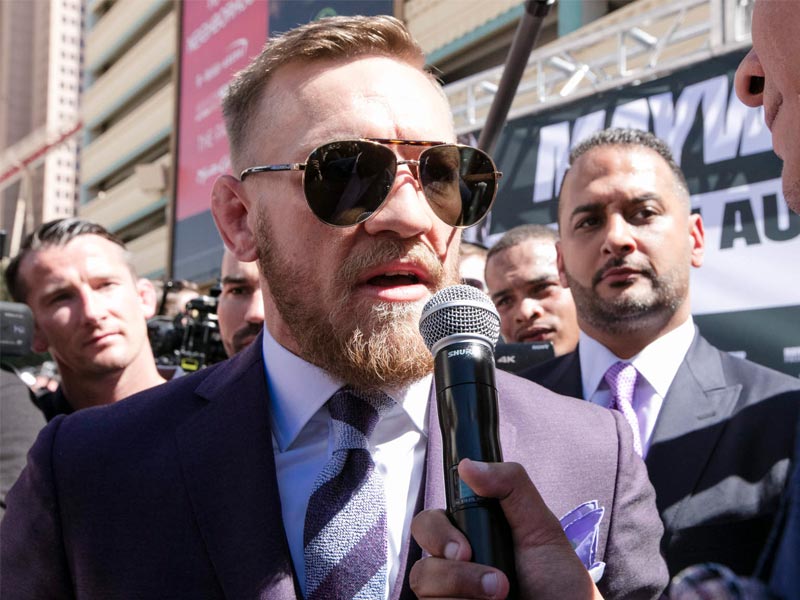 “If people are overlooking my size, power and youth, they shouldn’t be. I’m very confident in those attributes. I believe I’ll knock him out early.

“If you look at the way I fight, I am a fast starter. I come out and bang people right away. With eight ounce gloves, I don’t see him lasting more than one or two rounds.

“I am my own man and I feel I am superior to Floyd. When it comes to Saturday night, he will not be prepared for me.

“I cannot wait to get in the on Saturday night and perform in front of my fans and take my place at the top of this sport.”

“We are ready for anything Gervonta Davis will bring. We had a great training camp and I’m in optimal condition to go win that title.

“I am ready and excited to be here in Las Vegas for this great challenge. It’s amazing to have a chance to fight for a world title.

“It’s always been my dream to fight here in Las Vegas. I’m going to start out strong from the first round. If a knockout comes, it comes, but what I do know is, is that I’m going to leave the ring with that world title on Saturday night.”

“I just love this place. This is my favorite city on the planet. To fight here in Las Vegas and defend my world title is great. Badou is a top fighter and it’s going to be a tough fight. He’s fighting an established light heavyweight like myself. I’m a two-time champion of the world and he’s going to find out what I’m about.

“I just told him welcome to the division. He’s going to find out the hard way. I’m going to give him a rude introduction to the division and show him how a world champion does it.

“This is an interesting fight with two world class fighters. I’m going to leave here with the victory on Saturday night.

“It’s already a big fight with Badou Jack, but to be part of this event, it’s truly historic. It’s a special feeling.”

“Right now I’m just excited to be here in front of the fans. I can’t wait to put on a showSaturday night. I’m going to knock Nathan Cleverly out.

“This is the best camp I’ve had of my career. I have an amazing team and we’ve worked well together. I’m ready to get in the ring.

“This is the biggest stage you can be on. All my my teammates have been training hard and the whole Mayweather Promotions stable is ready to fight.”

“I’m very excited and I’m thankful to everyone that came out here today. This is a great chance for me to shine.

“It’s wonderful to share this card with my Mayweather Promotions stable. We work hard and we’re really up and training hard for this opportunity.

“Steve Cunningham has done a great job in his career, but it’s time for a new face of the American cruiserweights. I’m getting the victory, that’s all there is.”

“I feel a lot younger than my age. I feel great and I’m ready to rock. I do my talking in the ring and I can’t wait to get in there.

“It’s great to be on this stage. It’s my first time on a pay-per-view and it’s amazing. This is a huge fight and it’s a blessing to be there.

“I don’t make predictions but I come to fight and I come to win. You have a young fighter coming to take me down but I’m going to show him what I know.”

Floyd Mayweather vs. Conor McGregor is a 12-round super welterweight matchup that pits the legendary boxer Mayweather against the all-time MMA great McGregor in the main event of an unprecedented four-fight pay-per-view boxing event.  Mayweather vs. McGregor will take place Saturday, Aug. 26 at 9 p.m. ET/6 p.m. PT at T-Mobile Arena in Las Vegas.  The event is produced and distributed live by SHOWTIME PPV, promoted by Mayweather Promotions and sponsored by Corona.

Constellation Brands (NYSE: STZ and STZ.B), a Fortune 500® company, is a leading international producer and marketer of beer, wine and spirits with operations in the U.S., Mexico, Canada, New Zealand and Italy. Constellation is the No. 3 beer company in the U.S. with high-end, iconic imported brands such as Corona Extra, Corona Light, Modelo Especial, Modelo Negra and Pacifico. The company’s beer portfolio also includes Ballast Point, one of the most awarded craft brewers in the U.S. In addition, Constellation is the world’s leader in premium wine, selling great brands that people love, including Robert Mondavi, Clos du Bois, Kim Crawford, Meiomi, Mark West, Franciscan Estate, Ruffino and The Prisoner. The company’s premium spirits brands include SVEDKA Vodka, Casa Noble Tequila, and High West Whiskey.