The 40-year-old Mayweather, fighting for the first time in 714 days, announced after the fight that he will never fight again, ending his 21-year career in style by controlling an all-action fight that thrilled the 14,623 fans in attendance and watching around the world. With Mayweather coming forward just like he promised, referee Robert Byrd stopped the super welterweight fight at 1:05 of the 10th round as Mayweather punished McGregor with a series of blows that staggered his weary opponent.

With the win, the five-division world champion from Las Vegas becomes the first boxer to finish his career at 50-0, eclipsing the record he had previously shared with the legendary Rocky Marciano. 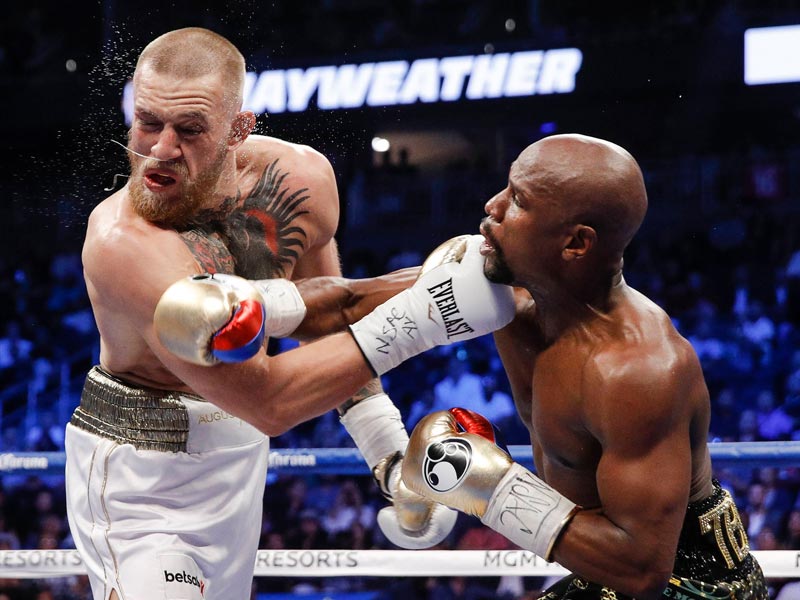 “I think we gave the fans what they wanted to see,” Mayweather told SHOWTIME ringside reporter Jim Gray after the fight. “I owed them for the Pacquiao fight. I had to come straight ahead and give the fans a show. That’s what I gave them.”

The first two-division champion in UFC history, McGregor, from Dublin, Ireland, said he was fatigued as the fight got into the later stages. “He’s composed, he’s not that fast, he’s not that powerful, but boy is he composed in there,” the 29-year-old McGregor said. “I thought it was close though and I thought it was a bit of an early stoppage. He was just a lot more composed with his shots. I have to give it to him, that’s what 50 pro fights will do for you.”

Both fighters had their moments in the early rounds. In the fourth round, Mayweather forced McGregor to back-pedal and continued to force the action. 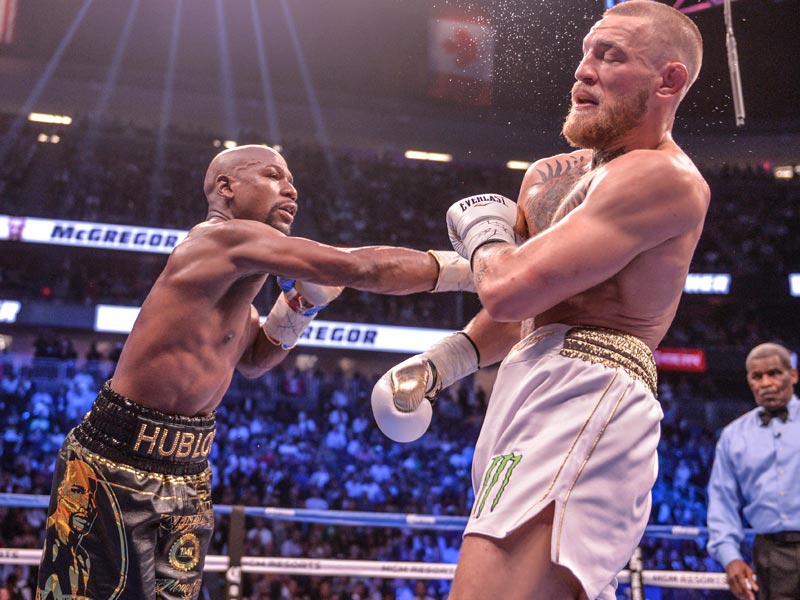 At the midway point of the fight, Farhood had given the first three rounds to the more aggressive McGregor, but then rounds four, five and six to the more accurate Mayweather.

“Our game plan was to take our time, go to him, let him shoot his shots early and then take him out down the stretch,” Mayweather said. “We know in MMA he fights for 25 minutes. After 25 minutes, he started to slow down. I guaranteed to everybody that this wouldn’t go the distance.

“Our game plan was to go straight ahead. I said numerous times that I wouldn’t back down and that’s what I did.”

McGregor said he would consider boxing again, and would also return to fight in the UFC. “I’ve been strangled on live TV and came back,” he said. “When you’re in here in the squared circle, everything is different. Let the man put me down, that’s fatigue, that’s not damage.

“Where was the final two rounds? Let me walk back to my corner and compose myself.” 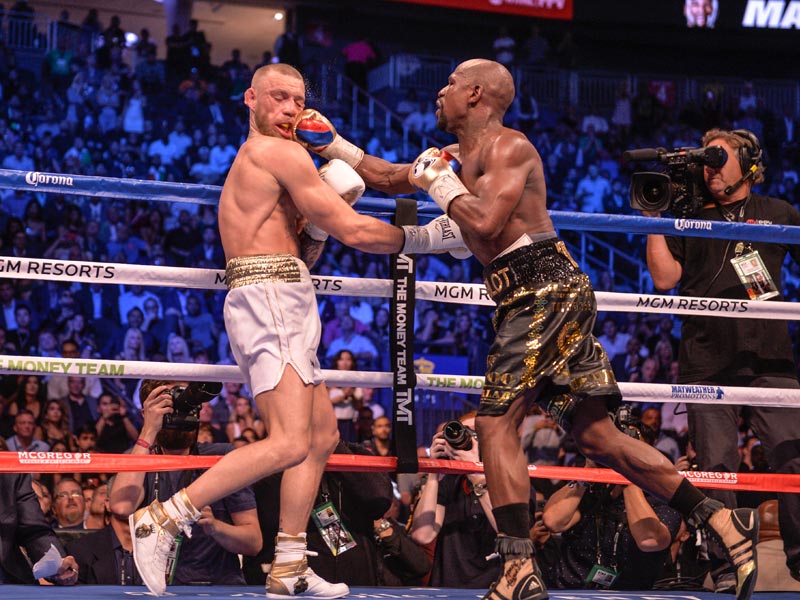 Mayweather was lethally accurate in the final round, landing 20 of 26 power punches before the referee stopped the fight. McGregor had a 51-40 advantage in punches landed over the first five rounds but was out-landed 130 to 60 in rounds six through 10 as Mayweather put an exclamation point on the final fight of his career.

“Rocky Marciano is a legend and I look forward to going into the Hall of Fame one day,” said Mayweather. “This was my last fight tonight. For sure. Tonight was my last fight. Tonight I chose the right dance partner to dance with. Conor, you are a hell of a champion.”

The 22-year-old Davis (19-0, 18 KOs) landed a series of clean blows before an apparent shot to the back of the head sent Fonseca down. Referee Russell Mora gave the 10-count allowing Davis to earn his 18th stoppage win in 19 professional fights. The fight was originally scheduled to be Davis’ second defense of his IBF Junior Lightweight World Championship, but Davis failed to make weight on Friday, coming two pounds over the 130-pound limit that Fonseca (19-1-1, 13 KOs) weighed-in at.

“I threw the shot as he put his head down,” said Davis. “I was definitely going to stop him eventually. He was in trouble before the last shot.”

Davis continued, “I’m going to stay at 130 pounds and try to get my title back. I still want to unify the junior lightweight division.”

Fonseca said he was sent to the canvas with an illegal blow.

“Everybody saw that when I was going down, he hit me twice behind,” Fonseca said. “It’s a blow that’s not legal. It was here in Las Vegas, so he had the crowd going for him, and I just want a rematch. He never hurt me with that exchange. Even though he came in at 160 pounds today, he doesn’t hit as hard as they say he hits.”

The Las Vegas-based, Swedish-born Jack (21-1-3, 13 KOs) out-classed Cleverly (30-4, 16 KOs) in a one-sided bout that was stopped by referee Tony Weeks with 12 seconds remaining in the fifth round. It was the first fight for Jack since moving up from 168 pounds to 175 pounds.

Jack had recorded majority draws in each of his past two fights against James DeGale of England and Canada’s Lucian Bute.

“It’s a dream come true,” said the 33-year-old Jack. “I’ve learned that you can’t leave it in the hands of the judges.”

“Jack was very strong,” said Cleverly. “He caught me and broke my nose in the third round. It was a downward spiral from there. I was wounded and protecting myself. It’s horrible but part of the sport.”

“I got a little excited at times but I barely got hit,” Jack said. “My boxing IQ was the difference in this fight. Everybody doubting me motivated me. My trainer and my team did a great job getting me to this point.”

The PPV telecast began with unbeaten Andrew Tabiti and former world champion Steve Cunningham meeting in a 10-round cruiserweight battle. Tabiti (16-0, 13 KOs) controlled the action against the 41-year-old Cunningham (29-9-1, 13 KOs) on his way to a unanimous decision scored 97-93 twice and 100-90.

With Floyd Mayweather Sr. working in his corner, the 27-year-old Tabiti set the tempo early and set the pace for the entire fight. “I was just jabbing him and making sure I stayed smart,” Tabiti said. “He’s a veteran so I had to stay composed. I wanted to show that I could box. This was a step up for me and I felt comfortable in there.”

A Chicago native who lives and trains in Las Vegas, Tabiti landed 31 percent of his jabs (70 of 229) and 49 percent of his power punches compared to just 27 percent for Cunningham. With the win, Tabiti retains the NABF cruiserweight title and won the USBA cruiserweight championship.

“He had a decent jab but he wasn’t busy enough,” Tabiti added. “I just didn’t want to make mistakes. If you start too fast against a veteran you’re liable to get caught by him.”

Cunningham wasn’t impressed with Tabiti. “I don’t think Andrew Tabiti is a championship level fighter,” he said. “I thought I won the fight. I didn’t think I saw anything special from him.”