From T-Mobile Arena in Las Vegas

“I am guaranteeing you this. You are going out on your face or on your back. So which way do you want to go?” – Mayweather

“I’m going to knock him out inside of four rounds. Mark my words,”

LOS ANGELES (July 11, 2017) – Unbeaten boxing legend Floyd “Money”Mayweather and UFC star “The Notorious” Conor McGregor went face-to-face for the first time on Tuesday, in a highly anticipated press conference in front of over 11,000 fans at STAPLES Center in Los Angeles as the two global stars discussed their Saturday, August 26 showdown at T-Mobile Arena in Las Vegas in an event that will be produced and distributed live by SHOWTIME PPV.

The fighters posed for the first face-off of the unprecedented event that has captured the imagination of sports fans around the world. Mayweather and McGregor will meet in a super welterweight contest that serves as the first time champions from boxing and MMA will meet in a sanctioned boxing match.

The Mayweather vs. McGregor world tour will continue on to Toronto, New York City and London as the superstars deliver all the spectacle of the summer’s biggest event directly to the fans who demanded it.

Here is what the press conference participants had to say Tuesday:

“Everyone knows I’ve never backed down from anybody. You line them up, and I knock them down like bowling pins. On August 26, I’m knocking Conor out. 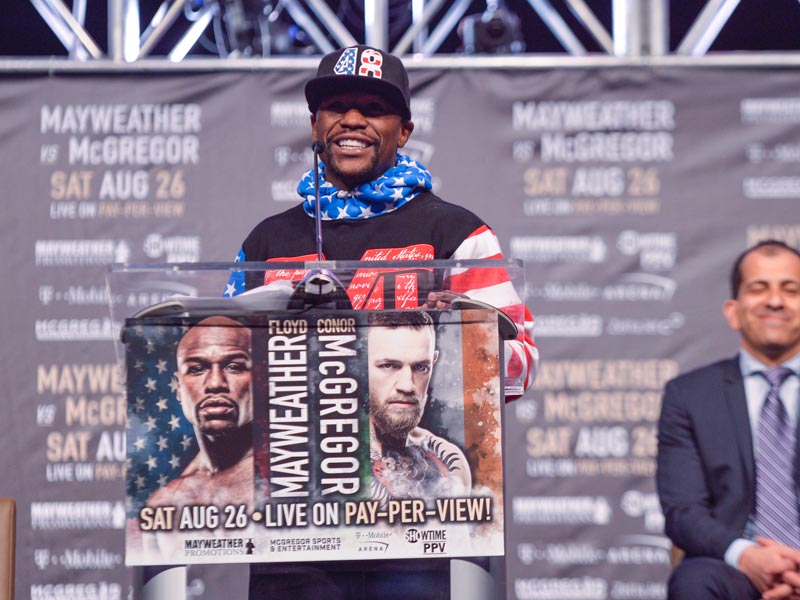 “I am guaranteeing you this. You are going out on your face or on your back. So which way do you want to go?

“Twenty one is the number. They ask me why is that the number? Because that’s how long I’ve been kicking ass. I don’t care about a ring or an octagon. Put me in there and I’m going to kick ass.

“It takes two warriors to bring an event like this together. The two biggest forces in combat sports made this happen.

“This was something that the fans wanted to see. I spoke to my team and said that theMayweather-McGregor fight can be the biggest fight in history. That’s what we’re here to turn into reality.

“McGregor is a professional, stand-up fighter. The only loss he took was when he was on the ground. He’s a tough competitor and I’m taking him very seriously. 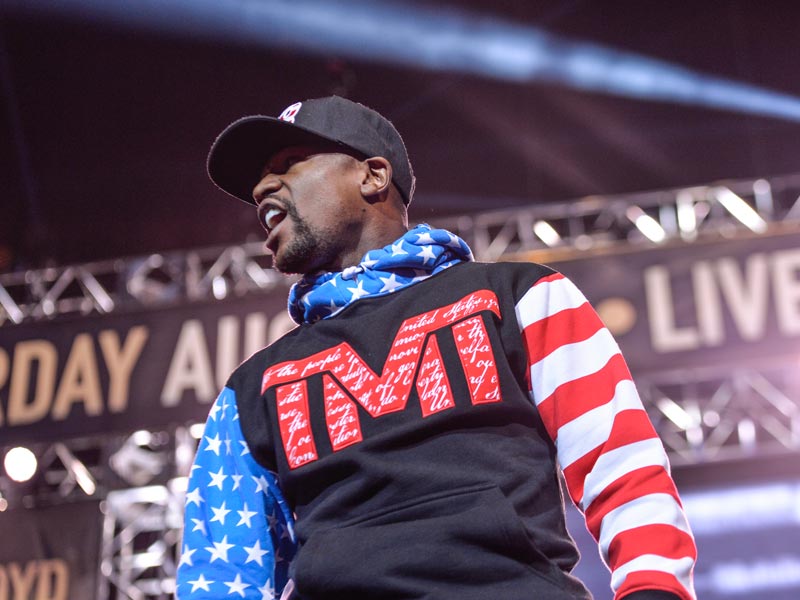 “Everyone knows I’ve been doing this for a long time. I’ve been here before. He’s a tough guy though and a warrior. The best must fight the best. The fans wanted this fight, me and McGregor wanted the fight. It’s going to be blood, sweat and tears onAugust 26.

“Training camp has been rough. I know deep in my heart that this is the last one. I’m taking care of my body and giving myself time off to allow my body to rejuvenate.

“Conor really wants to win. Extremely badly. Other fighters it usually plays out two ways. Some guys play it safe and then some like Marcos Maidana go for the kill. I think he’s the Maidana-type. He’s a heavy-hitter so I have to be cautious. It’s going to basically be a toe-to-toe battle.”

“My mind is blown. I’m absolutely honored to be here in front of you fans for this great spectacle. Somebody’s 0 has got to go. 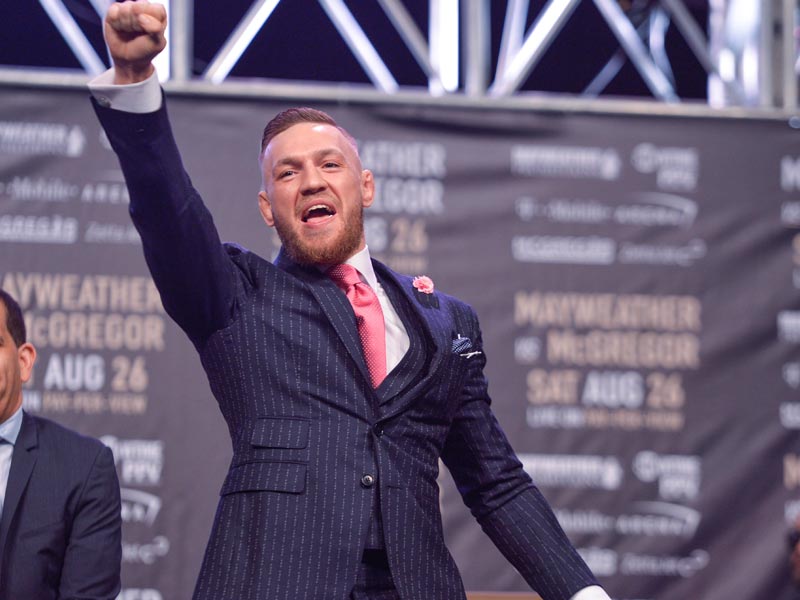 “He’s got little legs and little hands. I’m going to knock him out inside of four rounds. Mark my words.

“I’m a young, confident, happy man. I’ve worked extremely hard for this. I’m going to embrace everything. No one can do anything to me. I’m going to have a good time. 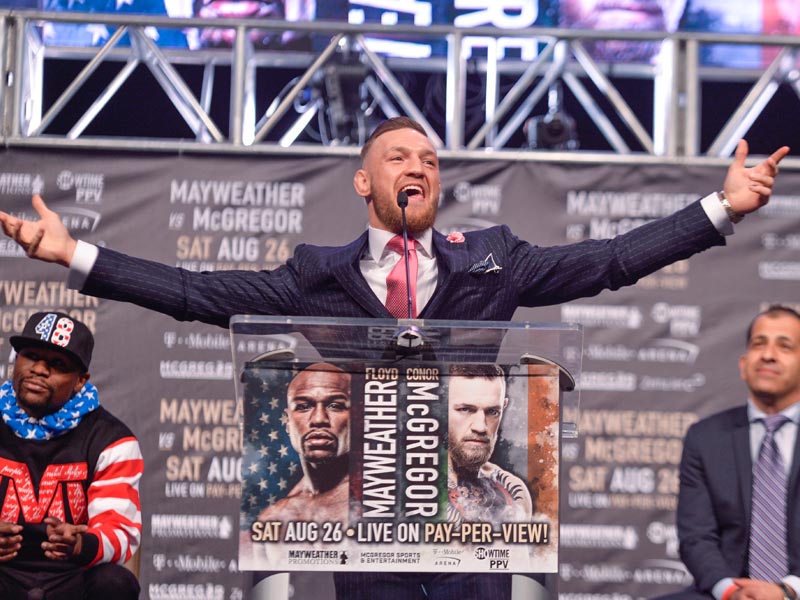 “Floyd will be unconscious inside of four rounds. The power and ferociousness that I have, he’s never experienced it before. I don’t fear him.

“Even if he catches one of my punches with his glove, it will still hurt him. I’m like nothing he’s ever seen before.

“Twelve, three minute rounds is going to be a breeze for me. Not to take anything away from this sport, but I have no worries about going twelve rounds with Floyd.

“Floyd is the perfect motivation for me to go in and conquer the supposedly unconquerable. What more motivation could you need? This pushes me on to do these record-breaking events.”

“This is a great fight that the fans have demanded. That’s exactly what we’re going to give them on August 26.

“Floyd Mayweather is the undefeated, pound-for-pound king and The Best Ever. He’s here to give the fans what they wanted and that’s his huge event a memorable fight onAugust 26.

“Mayweather Promotions is all about giving the fans exactly what they want, and this battle between Floyd and Conor is going to deliver all of that and much more.

“This is the can’t-miss event of the summer and this crowd at STAPLES Center proves just how big it’s going to be. This whole week we’ll be bringing all the excitement of a fight week to sold out venues throughout the world.”

“Over the last several years, SHOWTIME has teamed up with MGM and MayweatherPromotions to give fans the biggest and most exciting events in sports. Record-breaking event after record breaking event. We also have a long history of MMA in SHOWTIME and are glad to be in business with UFC and Conor McGregor.

“We will be working to deliver this event to the fans in unprecedented ways. We will give you new ways to experience the preparation leading up to the fight and then fight night, like never before. We’ll bring you behind the scenes and up close and personal with the “All Access” series. Your backstage pass to this fight premieres on July 28 on SHOWTIME.

“They said this fight could never be made, they said this fight would never happen, but this fight is no surprise. 10 years ago Floyd decided to leave his promoter and become his own boss. He became his own boss and broke PPV record after PPV record. Here we are, 49-0, he’s fought 24 world champions, and never lost. Floyd Mayweather has generated 20 million PPV buys and 1.3 billion dollars in PPVs. He is by far the number one attraction in sports and entertainment. There is no one else who is even close.

“Am I surprised that this fight is happening? Especially against someone younger, bigger and stronger than he is. Not at all. This is Floyd’s plan. To put on the most exciting and spectacular events that the sports world has ever seen. That’s whatAugust 26 will be. That’s been the plan all along. ”

“This is the biggest fight any of us have ever been a part of. People have just rallied behind this fight. Don’t judge a fight until the fight is over. You never know what’s going to happen, especially with a guy like Conor who hits like a truck. When he hurts someone, he puts them away.

“This is a completely full event today, not a seat left. We had to move to a bigger venue in Toronto. Barclays Center sold out and then today tickets sold out at Wembleyin 10 minutes. There’s never been anything like this.

“Floyd is almost 41 years old. Conor is a young southpaw who hits hard. We’ll see how it plays out. It’s crazy to think that Conor won’t connect with him.

“Conor McGregor believes in himself like nobody I’ve ever seen before. What he thinks about, he manifests into reality. The boxing media will get to know Conor on this tour and see the mental warfare that he engages in. Then on fight night, Conor is going to try to knock Floyd out.”

“Thank you to all the great fight fans around the globe watching this event. We’re thrilled that this event will be held at T-Mobile Arena, the home of the biggest events in the sports and entertainment industry. In only 15 months the T-Mobile Arena has become an industry leader and home to many of the greatest entertainers and athletes in the world.

“Las Vegas and the T-Mobile Arena will be the center of the sports universe for this great spectacle when two great champions bring these two sports together for the first time. It’s going to be an absolutely electric weekend. We look forward to delivering an unforgettable experience to all the fans who travel from around the world to this great event.” 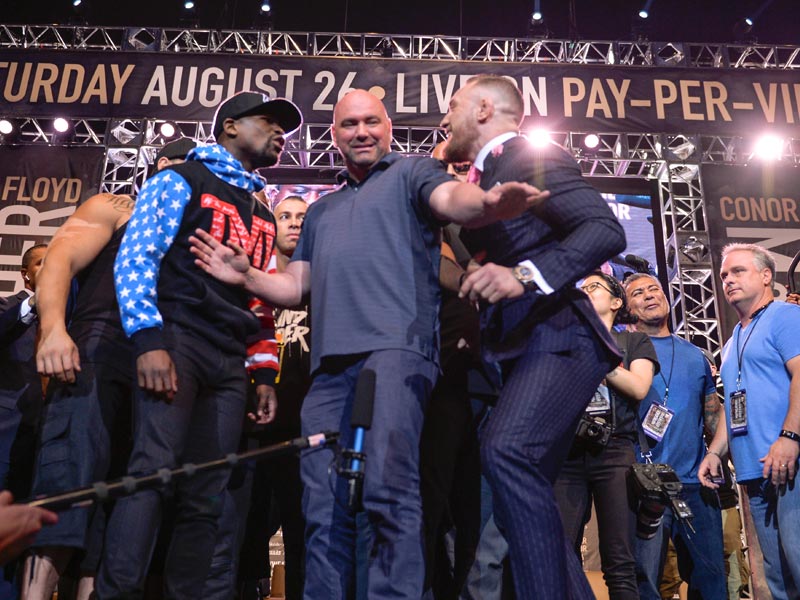 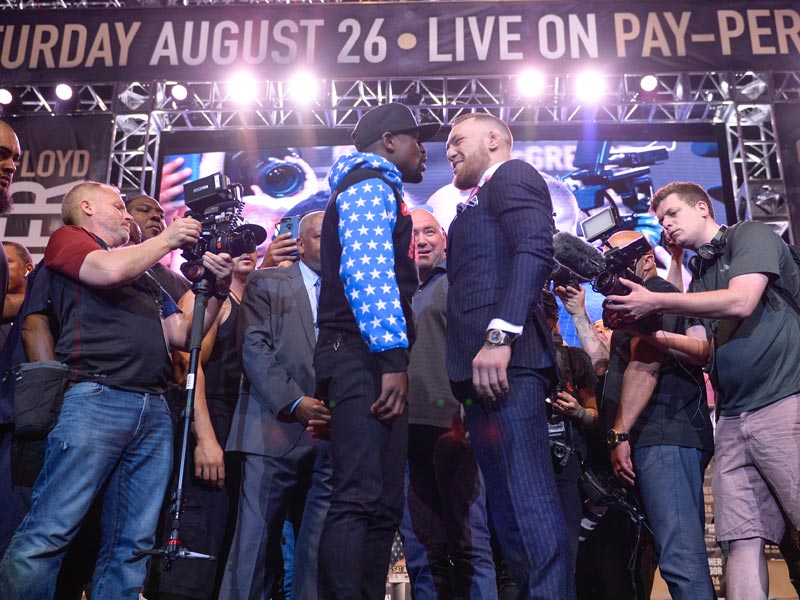 Check out our video section for the full LA press conference!
For more information visit www.SHO.com/Sports and www.mgmgrand.com, follow on Twitter @FloydMayweather, @TheNotoriousMMA, @MayweatherPromo, @UFC, @ShowtimeBoxing, @SHOSports, and @Swanson_Comm or become a fan on Facebook at www.facebook.com/MayweatherPromotions,www.Facebook.com/SHOSports and http://www.Facebook.com/UFC