LONG ISLAND, NY – Unbeaten Omar Figueroa (27-0-1, 19 KOs) returned to the ring in emphatic fashion with a third-round stoppage of former champion Robert Guerrero (33-6-1, 18 KOs) in the main event of Premier Boxing Champions on FOX and FOX Deportes Saturday night from the newly-renovated NYCB LIVE, home of the Nassau Veterans Memorial Coliseum. The show was the first major boxing event to take place at the Coliseum in 31 years.

The former world champion Figueroa returned to the ring after a 19-month layoff and hardly missed a beat, as he sent Guerrero to the canvas five times over the three rounds and became the first fighter to ever stop Guerrero. 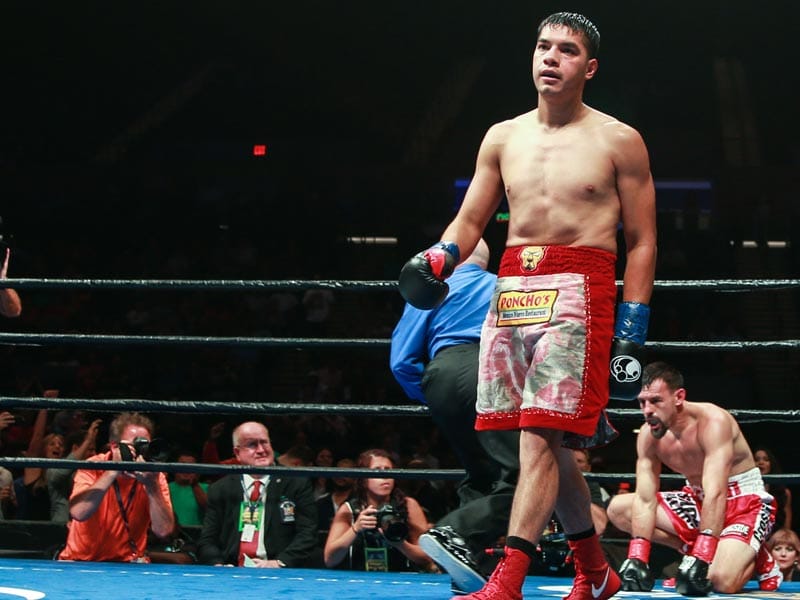 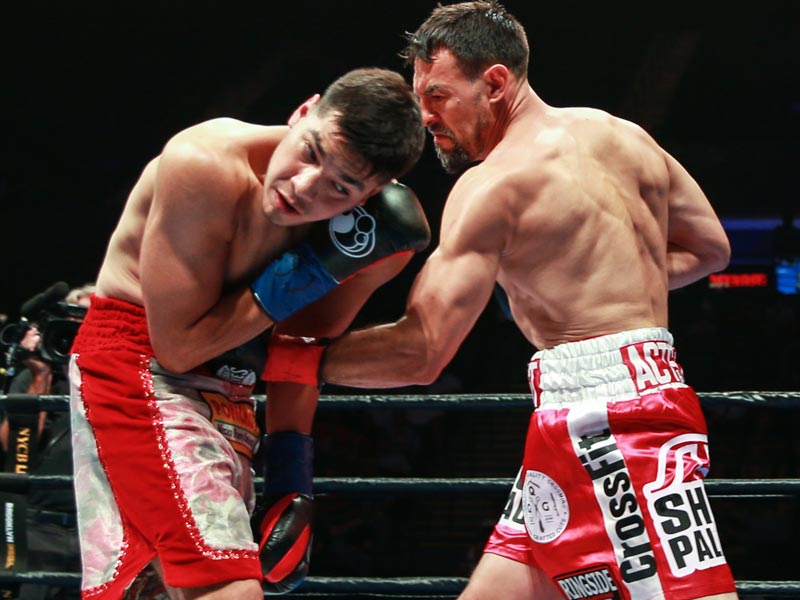 After winning the first round on all three judges’ scorecards, Guerrero continued to fight Figueroa from the inside and attempted to punish him with power shots. However, it was Figueroa who landed the first decisive blow of the fight, a scorching left uppercut that sent Guerrero immediately to the floor.

“I haven’t fought this way in a long time because I didn’t have the power in my hands,” said Figueroa. “I’ll always find a way to come out on top though.”

Figueroa continued to attack, putting Guerrero down for a second time with a body shot and once more with a glancing shot right before the end of the round. Guerrero looked to blitz Figueroa to start the third round and immediately had Figueroa cornered. 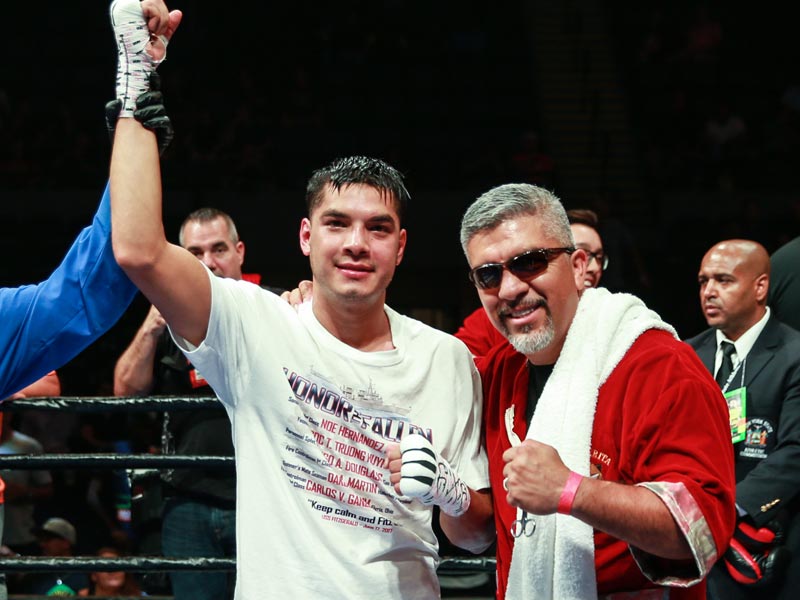 “I’ve been working since January so I’m going to take some time off,” continued Figueroa. “Then I’m going to get back into camp to get back to 140-pounds. I want to be back in the ring by the end of the year.”

The unbeaten fighter was able to turn the tide quickly however, putting Guerrero down twice more with strong flurries before referee Ron Lipton waved off the bout 1:34 into the round. After the bout, Guerrero was taken to Nassau University Medical Center for precautionary reasons.

Unbeaten 2012 U.S. Olympian Marcus Browne (20-0, 15 KOs) continued to solidify his status as a world title contender with an electrifying stoppage of previously undefeated Seanie Monaghan (28-1, 17 KOs) in the second-round of their light heavyweight battle. 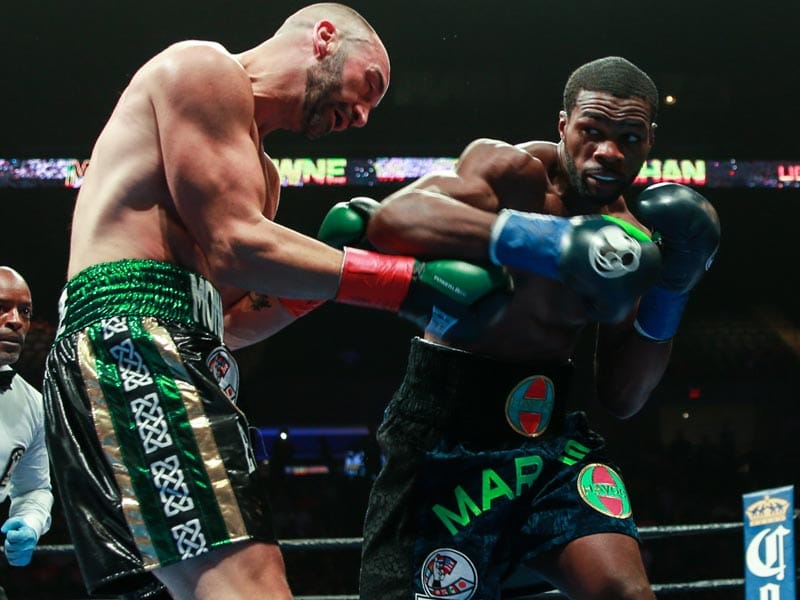 Despite fighting in front of a friendly crowd in his native Long Island, Monaghan struggled from the start as a blistering left hand from Browne sent him to the canvas early in the first round. Monaghan was quickly in survival mode and was aided when referee Steve Willis halted the bout after deeming that Browne had connected with an accidental low blow while looking to finish his opponent.

“”I could tell that I hurt him, but I didn’t want to rush and walk into anything,” said Browne. “I just took my time and allowed everything to fall into place.”

“It was an honor for me to represent Long Island,” said Monaghan. “I knew that it was a big task tonight. Marcus is even faster than in sparring. I’ll be alright though, I’m happy that if I had to lose, it was to a guy the quality of Marcus Browne.”

Monaghan was able to recover and eventually make it through the round, but Browne put his foot on the gas pedal to begin round two. Browne was able to trap Monaghan against the ropes and delivered a crushing series of body blows and chopping shots that caused Monaghan to hunch over. The onslaught eventually forced the referee to call a halt to the bout 40 seconds into the round.

“I’m honored and blessed to be a part of this event and I just want to move upwards and onward from here,” said Browne. “I want a date with Adonis Stevenson next. It’s amazing to have this kind of exposure on FOX and FOX Deportes. I loved the opportunity to make new fans tonight.”

“Marcus has always been a fast starter,” said Monaghan. “He always comes out very fast. I thought I was ready for the speed, but he is very skilled. I think he’s going to go a long way.”

In front of a large contingent of his hometown fans, Adam Kownacki (16-0, 13 KOs) put on an impressive performance against his best opposition to date by scoring a fourth-round TKO of former title challenger Artur Szpilka (20-3, 15 KOs) in their heavyweight showdown. 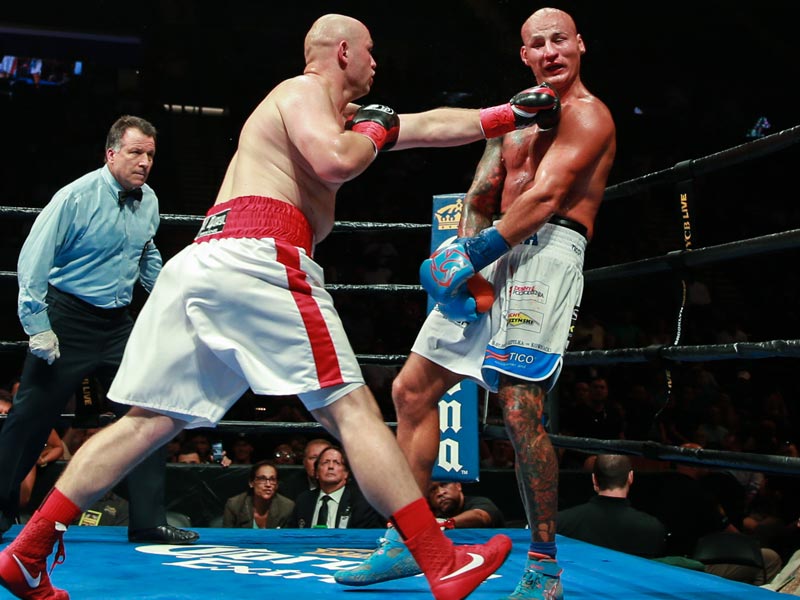 “I always knew that I had him,” said Kownacki. “From the first shot I hit him in the body, I knew he didn’t have enough. My pressure was too much.”

The fight began with both men looking to impose their styles as Szpilka attempted to establish his jab and evade his opponent, while Kownacki tried to trap Szpilka in a corner where he could tee-off with power punches.

Despite his left eye swelling up after two rounds, Kownacki was able to take the first bit of momentum by connecting late in round three with a series of power shots that appeared to at least shake Szpilka up.

As the fourth round began Kownacki wasted no time, landing a big punch that caused blood to start pouring out of the nose of Szpilka. While the former title challenger tried to keep his distance, the heavier Kownacki was able to land a series of power punches that put Szpilka on the canvas.

“I have a great trainer and a great team that has gotten me into great shape,” said Kownacki. “I have to give them all of the credit. Whatever he was doing, I was ready for.”

While Szpilka was able to get to his feet, Kownacki continued to keep the pressure on as another series of power punches, led by a strong right hand, sent Szpilka into a heap and forced referee Artur Mercante to stop the bout 1:37 into the round. Kownacki landed 42 percent of his power punches in the decisive fourth round.

“It took Deontay Wilder and Bryant Jennings a lot longer to get him out of there,” said Kownacki. “But I still have things that I’m going to go back and fix. Once I improve those aspects of my game I think that a lot of people are going to know me.”

“He hit me once with a good shot and after that I just never recovered,” said Szpilka. “I think it was a left hook. I’m going to rest now. This was not how I wanted this to go and I’m very disappointed.”