The sun sets everywhere in Namibia except at MTC Nestor Sunshine Promotions, where Nestor Tobias is known to break night. The country’s premier promoter is hard at work developing a roster that has produced multiple world champions, including current WBA & IBF 140lb. titlist, Julius “The Blue Machine” Indongo.

The bout is another step in a journey that began watching combat sports in the northern Namibian village of Etundja.

“One evening, when I was about 13, I watched a Bruce Lee movie and I was impressed by his moves,” Tobias recalls. “I joined a karate club and practiced for three months. Then I watched a Muhammad Ali movie and decided that’s who I wanted to be like.”

Tobias (seen on the right in main picture, alongside MTC’s Tim Ekandjo) joined a boxing club in the mining town of Tsumeb and fought as an amateur, ultimately becoming one of the nation’s best along with future world champion Harry Simon.

Tobias had 18 professional fights before retiring in 1999 and opening the Nestor Sunshine Boxing Academy. 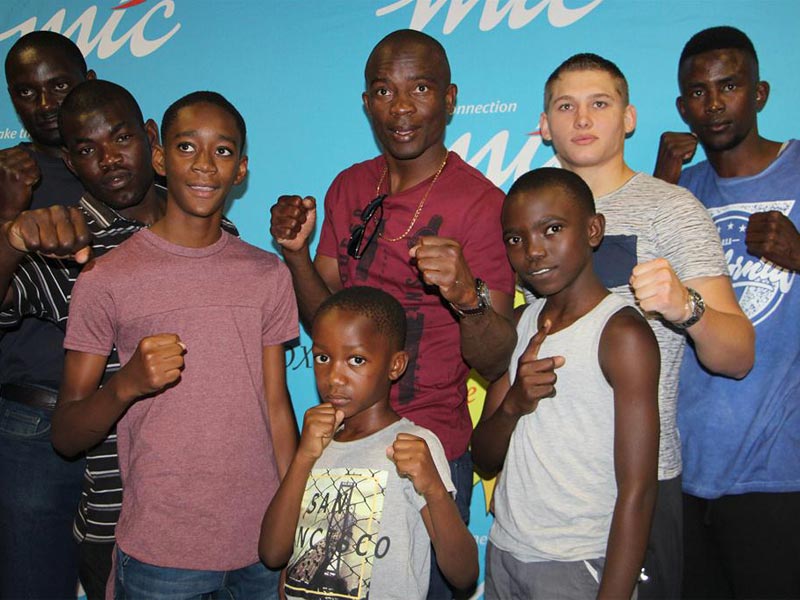 Indongo with some of MTC’s talent

“The promoters who were registered with the Namibia Boxing Control Board had no understanding or any interest in boxing then,” he says. “I decided to apply for a promoter license and ended up wearing three hats: trainer, manager and promoter.”

Tobias invested the modest sums he earned during his pro career and managed to produce national champions; then regional; continental, intercontinental and finally, a world champion—Paulus “The Hitman” Moses became the WBA lightweight champion in 2009.

Tobias is still churning out elite boxers. BoxingAfrica.com sat down with the promoter/trainer as he prepares for another major step in a journey filled with them.

How is Julius looking in camp?

Julius is looking very good. He’s hungry for this fight as, in his sober mind, this is a dream come true. There aren’t a lot of boxers who get this opportunity to shine.

Julius is a very positive and hardworking guy who believes in himself. He knows he has to work hard to achieve his goal and this fight isn’t anything different. I always tell my boxers, no pain, no gain. The more pain you feel, the better it is for business because any work that does not come with pain is not worthwhile.

Tell us, how easy or how difficult was it for you to make this fight against Terence Crawford?

It was not easy to get or to make this fight, but because all parties wanted it to happen, it was easier than expected. First, I would like to thank Mr. Eddie Hearn of Matchroom Sports, who played a big role in making this fight happen. Also, a big thank you to Top Rank’s Bob Arum and to his champion Terence Crawford.

You have a host of other fighters in your stable – can you provide an update on who they’ll be fighting next?

It’s difficult to say who will fight who next, but I can tell you that all my fighters from all levels are in the gym ready. We are busy working on an event taking place on September 9. We will have all of our world-rated boxers on there, such as Paulus Moses, Sackaria Lukas, Jeremiah Nakathila—all fighting for the WBO Africa titles. They’ll be supported by our top prospects on the undercard.

This show will take place in Namibia, and we will continue producing world class events in Namibia as we have been doing for the past 17 years. This is where Paulus Ambunda, Paulus Moses and Julius Indongo were developed and introduced to the world of boxing.

Along with promoting, you also train Julius. How did you become a trainer and how do you manage all of these roles? 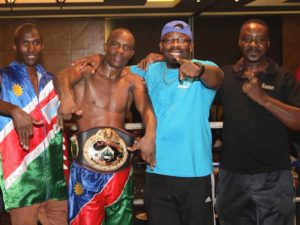 Julius Indongo joined the academy just like other boxers and because he was willing to help himself, it was to my advantage because I love working with disciplined boxers. It’s difficult to manage, especially when there aren’t enough sponsors to accommodate all the expenses and that is why I developed three quality coaches, Siegfried Kaperu, Immanuel Paulus and Joseph Anhindi. These are world class coaches and that made it easier for me to manage and to develop boxing in Namibia.

What is your outlook on Namibia boxing?

We have enough talent, but because of the lack of funding from government and private corporations, it will be a big challenge to develop world class athletes. In any country in Africa, it will be very difficult to get to the top in sports without government involvement.

What is it about Namibia, a country of 2.5 million people, that enables her to produce so many world champions?

An individual sport can always shine within a small population if they get good support. Boxing is in our blood. If you know Namibian history, you know that Namibian’s are born fighters. Traditional fighting was part of man’s entertainment especially when looking after cattle. Boys would test each other to see who was the strongest and I believe it is why there are so many talented boxers in Namibia. If we take it serious, we can be number one in the world because it’s in our blood.

What changes do you feel need to be made in order for the sport to progress further in Namibia and Africa? What role do you plan to play in that?

I think we are already playing our role by producing world class champions. It’s an eye-opener to our leaders in Namibia and Africa at large that we Africans can also do it. I believe that other countries, by seeing a small country like Namibia do it, will also be motivated. The leadership in Africa must also convince the corporations to pump money into boxing. As Africans, we need to learn how to work and respect each other, because by doing that we can learn from each other.

How big of an achievement is it for you to guide Indongo to become the first African-born boxer to unify in one division and toward a huge fight like the Crawford unification?

It is a good feeling; being an African, and when you hear people say you are the first, it motivates you. I’m sure that Julius is ready to go and shock the world. When we went to Russia and won the IBF world title, we were underdogs. It was the same in Scotland versus Ricky Burns and this assignment is no different. The world still doesn’t give us any chance and we are going to the United Sates as underdogs. We enjoy being underdogs and coming out untouched. After August 19, we trust the world will respect Africa, respect “The Blue Machine,” and will know where Namibia is.

I want to thank our main sponsor, MTC, the Government of Namibia and its leadership, and for sure boxing fans in Namibia, boxing fans in Sub-Sahara, West Africa, North Africa and the whole Africa at large. And I would like to ask them to keep supporting and praying for us to remain victorious. Let us work together as Africans and keep united for the better of Africa. We are borrowing the word from our president, Dr. Hage Geingob, “Harambee Prosperity.”