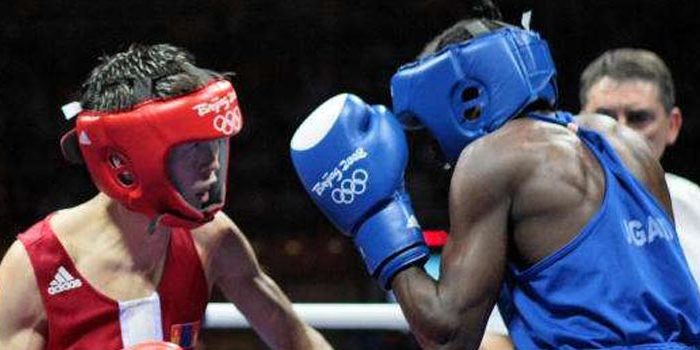 All, except Reagan Ssimbwa who boxed at the 2015 All-Africa Games, are eyeing a continental debut and have no teammate or coach around to paint them a clear first-hand picture of Africa’s most prestigious amateur tournament, which is also a qualifier for the World Boxing Championships in Hamburg, Germany.

In 2015, eight boxers represented Uganda in Casablanca, Morocco–five reached the semis and four qualified for the World Championships in Doha, Qatar.

But in just two years, all have since left Lugogo, treading different paths mostly into the murky waters of professional boxing here and abroad. While the renowned coach Dick Katende died 11 months ago.

It has been two months of daily gruelling morning jogs through Naguru, Ntinda, Mulago, Wandegeya; brutal training and sparring sessions at Fit 4 Life gym and the hockey grounds, near their impoverished hostels–they must thank BetWay and individual well-wishers for at least filling their dishes.

But five of the 13 must prepare for the heartbreak that that hard work can only count next time–not now–because the federation secured tickets for only eight and one coach.

Ironically, as those in Brazzaville will miss that exclusive attention from their team doctor after suffering a cut or sprain; those in Kampala will have a shoulder to cry on–there is no ticket for camp doctor Chris Mbowa.

Yes, such has been the story in the Kenneth Gimugu era that federation spokesman Fred Kavuma is less bothered. “We haven’t been taking doctors to other tournaments,” said Kavuma, who is the pivot of all federation business. “We shall use the competition doctor; what do you do when you try your best and fail to get all you need?”

Nevertheless, these new boys, most understudies of their predecessors, need much guidance and mental preparedness to back their raw ambition under the usually inadequate Lugogo conditions.

So Godfrey Nyakana’s briefing cannot be overstated. “Boxing is a very big sport in Uganda but it no longer gets the attention and support it deserves. We shall demand that attention and support but it begins with you the boxer. If you behave and perform well, the media will welcome you and government and companies come in,” the 1990 Commonwealth Games champion told the team at his Lake Victoria Suites in Munyonyo Sunday evening.

“We need a minimum of five to qualify (for Germany); this is a unique route to greatness–life is a struggle; you either choose to be great or be lacklustre.”

Curtin slightly outworked his rival, though, and in the last round connected with head and body to earn the verdict.

A dominant display against Levi Tyrell (Sunderland East End) had sent 13-year-old Curtin through to the final, with a strong jab pushing his rival on to the ropes in a unanimous victory.

But Jay Jay Curtin, 16, saw his hopes of gold shattered by a cut after an accidental clash of heads in the final round of his contest with Cillian Spillane, from Ireland’s Munster Boxing Select.

Spillane fired off straight shots and used his angles well to edge the first round, but Curtin hit back with jabs in a much closer second round.

Both boxers went for it in the final round, but Curtin’s cut led to a stoppage, with his rival ahead on the judges cards at that point and named the victor.

Curtin had beaten West Ham’s Alfie Meaghan on a unanimous points decision a day earlier, after a cagey first round saw him kept at bay by a tall, rangy rival.

A strong second-round display and good straight shots gave the Islington youngster the edge and he maintained a good workrate in the final round.

The 14-year-old Sertten lost his semi-final to Lion ABC’s Ram Singh on a split decision, as his opponent made good use of a longer reach to keep him at bay during a cautious contest.