The Broadway Boxing series is promoted by DiBella Entertainment and presented by Nissan of Queens, Azad Watches, OPTYX, and Christos Steak House.

Remillard, 30, was the No. 2-ranked featherweight in the world in 2011, when he lost to future world champion Mikey Garcia (LRTD11). Fighting out of Manchester, CT, this fight was Remillard’s first in his home state in six-and-a-half years, due to him serving a five-year prison sentence. He returned to the ring this past April, taking an eight-round decision from Agustine Mauras, in Worcester, MA.

In the opening round, Remillard (25-1, 14 KOs) and the slick Benin-native, former WBC International Silver champion Fassinou (27-6-3, 14 KOs) got to know each other as both fighters were cautious. Remillard opened up in the second round, using his left to the body, dropping Fassinou in his corner during the final seconds. Remillard pressed the action in the third, peppering Fassinou around the ring in his familiar punishing style, putting Fassinou in his “Sharp Shooter” sights for target practice in the fourth. Fassinou failed to answer the bell for the beginning of the fifth round.

“Against a southpaw, the left hook to the liver is there, and is a punch I’m known for,” Remillard commented. “He was a little sloppier than I expected. I felt good; I’m 24/7 in the gym. Maybe I’ll have one more fight this year to get in some rounds, and then get ready for a big 2018. I want a rematch with Mikey Garcia, at 135 or 140 pounds, 100-percent. He owes me a rematch. The guy he beat wasn’t me.” 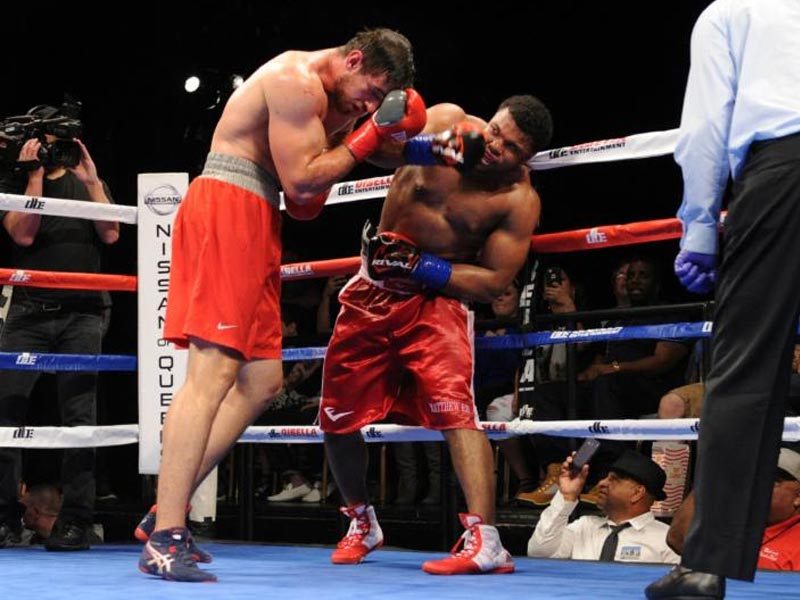 In the co-feature, two New York City-based heavyweights, 6’5″ Russian Ruslan Shamalov (4-1, 3 KOs) and Dominican “Gentleman” George Arias (7-0, 3 KOs), fighting out of Brooklyn and the Bronx, respectively, put their undefeated records on the line to produce another Broadway Boxing heavyweight slugfest. Shamalov’s power punches rocked the much shorter 5’11” Arias in the first round, but Arias stayed off the ropes and boxed much better in the second. The two fighters exchanged bombs throughout a terrific third round and, somehow, the fourth was even better with back-and-forth, nonstop action. The pace subsided slightly in the fifth round, setting the stage for a bombs-away sixth and final frame that didn’t disappoint.

Shamalov and Arias fought at a furious pace, especially for heavyweights, in a legitimate six-round “Fight of the Year” candidate. Arias, the leader of Team Wash Em’ Up in the Bronx, won a unanimous decision by scores of 60-54, 59-55, and 58-56.

“This win was humongous for me,” said an overjoyed Arias. “I had a game plan, but once he hurt me in the first round, my heart took over and I just fought. I like to fight for the people, so I held on in the first instead of taking a knee.” 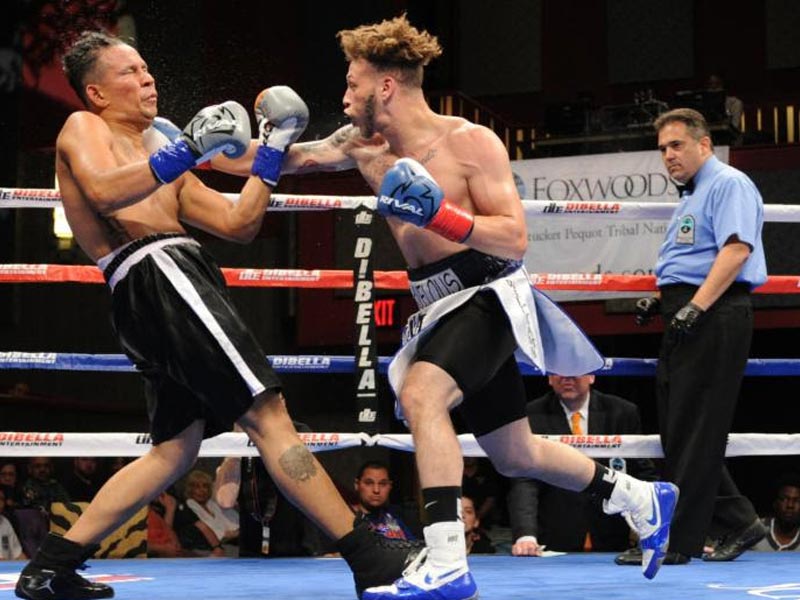 Crowd favorite “Marvelous” Mykquan Williams (7-0, 4 KOs) gave himself an early high school graduation present as the East Hartford fighter defeated Nicaraguan welterweight Ariel “La Guerra” Vasquez (13-18-2, 9 KOs) in the former’s first six-round bout. The 19-year-old Williams, a five-time National amateur champion, is a budding star with tremendous upside. Poised beyond his years, Williams controlled the pace against his battle-tested southpaw opponent, who is 11 years Williams’ senior, displaying his vast arsenal of punches, especially his left-right combination that landed consistently. Williams’ fast hands exploded for the first time at the end of the second round, then he picked up his assault in the third, as he cruised to a six-round shutout decision, with three tallies of 60-54.

Williams graduates on June 20 from Prince Tech. “That was a good graduation present,” Williams said. “My hand speed played a big factor. He was a tough guy, especially for my first six-rounder.”

Class prevailed in an entertaining female lightweight match, as former UBF world super featherweight champion Jennifer “The Bolivian Queen” Salinas (20-4, 5 KOs) defeated Marquita Lee (3-5) by way of a hard-fought six-round unanimous decision. Salinas, fighting out of Providence, was the aggressor throughout, but Lee never took a backward step. Scorecards read 59-55 twice, and 58-56, all for Salinas.

Fighting a much more experienced and taller opponent from Africa, promising Lynn, MA prospect Khiry “TNT” Todd (5-0, 5 KOs) won his fifth pro fight, all by knockout. A 2016 New England Golden Gloves champion, Todd gained invaluable experience against cagey super welterweight Nicolas Sarouna (12-9-1, 9 KOs), of Togo, who took a knee after getting hit by a sneaky uppercut in the third round. Sarouna failed to beat the 10-count, as Todd improved his perfect record, with a TKO stoppage at the 1:32 mark.

Unbeaten Russian junior middleweight prospect Radzhab “The Python” Butaev (6-0, 4 KOs) was too much for Mexican Abraham “The Swift” Alvarez (20-11-1, 11 KOs). Butaev dropped Alvarez early with a vicious left hook, from which Alvarez never fully recovered. A brutal right to the liver put the Mexican on mat once again, in obvious pain, as referee Joey Lupino immediately waved off the fight at 1:05 of round one.

Cuban cruiserweight Luis “El Leon” Garcia (15-0, 12 KOs) kept his perfect pro record intact with a first-round knockout of his outclassed Mexican opponent Felipe Romero (19-14-1, 13 KOs), fighting out of San Diego. Now living in Peekskill, NY, Garcia dropped Romero with an overhand right in the opening seconds and he never let up, hurting Romero with a series of devastating rights. Garcia closed the show with a powerhouse uppercut, leading referee Johnny Callas to halt the action at the 1:48 mark.

Three-time Puerto Rican National Boxing team member Jose Roman (4-0, 3 KOs) went the distance for the first time against a game William Hill (2-3), of Detroit. The skilled Puerto Rican welterweight applied pressure from the opening bell, using a fierce body attack on Hill, who was trapped on the ropes for most of the fight. The judges tallied 40-36 twice, and 39-37, all for Roman via unanimous decision.

DiBella Entertainment’s unbeaten featherweight contender Luis Rosa Jr. also fought on Saturday, headlining a card at the Floyd Little Athletic Center in his hometown of New Haven, CT, facing Carlos Osorio, of Managua, Nicaragua. Rosa pressured his adversary throughout the contest, wearing him down with a steady attack to the body. Osorio was game and had a stiff jab, though the hometown favorite’s combinations on the inside helped to diminish the Nicaraguan’s punch output. Believing that Osorio had taken a great deal of punishment, the referee halted the contest at the 1:25 mark of round six, awarding Rosa the TKO victory. With the win, Rosa improved to 23-0 (11 KOs), while Osorio’s record dropped to 13-7 (5 KOs).