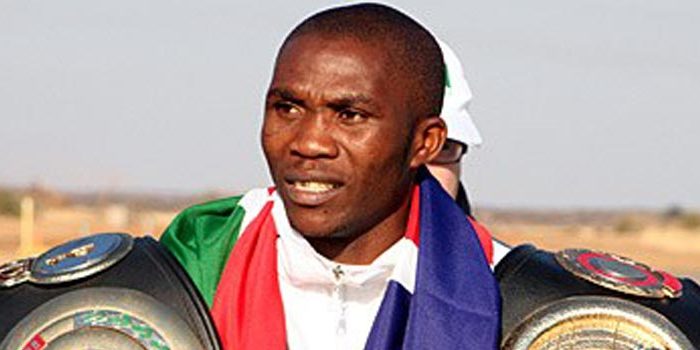 BoxingAfrica.com recently spoke to Namibia’s Paulus Moses one-on-one. The former WBA World lightweight champion (39-3, 24 KO’s) has quietly been one of the best fighters that Africa has produced. And he’s on a mission to regain another world title. If last April’s stoppage of Crispn Moliati is any indication, Moses hasn’t lost a step.

Paulus, first congratulations on your seventh round TKO over Crispin Moliati.

Thank you, what a fight that was. I am happy to still win by TKO’s, the fans appreciate that and so do I.

You’re now the elder statesman of the Namibia boxing team. Do you feel any different at 39-years-old compared to maybe ten years ago?

That’s an interesting question, because naturally I am supposed to feel older and slower but I have been blessed differently. I feel faster, have continued training hard and have been hungrier then I have ever been. I am happy to see so many young stars coming through the ranks. Namibian boxing is in good hands under MTC Sunshine Promotions. Congrats to Julius Indongo, my colleague and everybody else coming through. We are far from done from surprising the world of boxing.

What has 15 years of professional boxing taught you about the game?

Definitely that there are no short cuts, that you have to be patient and consistent and be associated with a promoter that carries youR best interest. My career has been truly blessed. I had the best fights, traveled the world, claimed a world title and defended it twice and have since continued enjoying boxing. You got to have a big heart and a strong chin but importantly, be very disciplined.

Paulus, you’re now ranked #4 by the WBO at lightweight. How many more fights away are you from a world title shot?

Being at #4 is tricky, but it’s a good position to be in if you keep busy and continue winning. At that position, the current champion will under normal circumstances not challenge you for a voluntary defense, but I am hoping to get a shot at the title through a world title final eliminator fight. I have an experienced promoter in Nestor Tobias who I started my boxing journey with and I am confident that we will together get a shot at another world title.

You’ve been around the sport for a long time. Give us your thoughts on the Namibia boxing scene and how it’s grown over the years.

If there is one thing, we are abundantly blessed in Namibia because we have passionate boxing fans and talented boxers. Namibian boxing has grown and more talent is coming through. With a population of only 2.3 million people, we have already produced three world champions and six world title belts which is incredible. Our biggest challenge is the support of a commercial TV station to support promoters financially because boxing has become expensive.

You have a wealth of experience from which others can glean. Do you impart advice to other Namibian boxers?

Yes, that responsibility comes natural to me. I am always ready to spar with young fighters when they prepare for big fights and also just to advise them how to remain focused, disciplined and ready to win.

In closing, when can we see you in the ring again?

Hopefully very soon, and of course a mega fight. Watch the space!