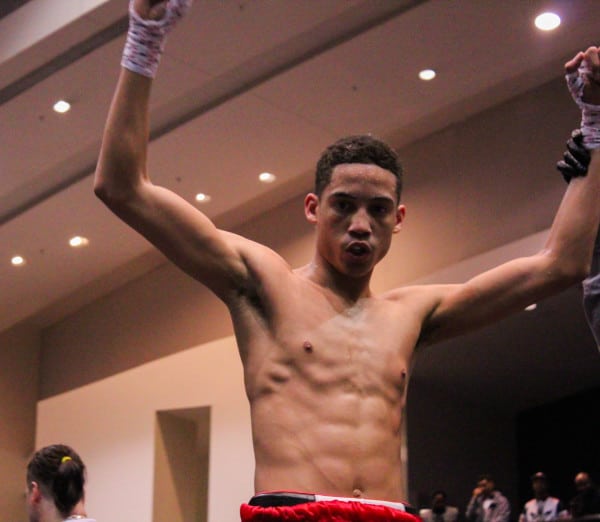 Fort Washington, MD (June 1, 2017)-Undefeated junior welterweight prospect Mykal Fox has big plans for the rest of 2017, but standing in his way will be veteran Daniel Sostre in an eight-round bout that will headline a card this Saturday night at The Rosecroft Raceway in Fort Washington, Maryland.

The Mykal Fox-Daniel Sostre card is promoted by King’s Promotions.

Fox of Forestville, Maryland has become a popular headline attraction in the Beltway

“Training has been pretty good, and everything is coming together,  I am very excited for this fight,” said Fox.

“I am extra excited as he has a lot of experience and has been in with some good fighters.  He is pretty good.  I watched some his fights including his fight with Phil Lo Greco.”

After this fight, Fox can see himself starting to move up the rankings as he is looking for some regional title bouts.

“I have seen some of the guys who turned pro around the same time that I did, and they are fighting for those titles.  As the year winds down, I feel like I will be ready to claim those title belts.”

Being that this will be 5th headline appearance for Fox, he sees his popularity continue to grow with each fight.

“I am fighting better competition and more people are coming out to see these fights.  I was fighting on cards with future world champions as headliners and now it is my to be the main event.  I know it will get even bigger when I fight for those titles, which I feel could be next.”

In a six-round bout:

Malik Loften of Suitland, MD will make his pro debut against Jemour Edwards (0-1) of Orlando, FL in a featherweight bout.

“THE AWAKENING BOXING” TOURNAMENT SET TO BEGIN TOMORROW
May 24, 2018