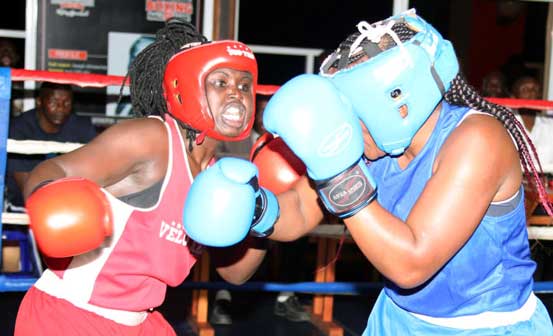 Akinyi lost to Clotide Essiene of Cameroon 4-1 on points in the semi-finals on Tuesday night to bag a bronze.

The AFCB event is also a qualifier for the International Boxing Association (AIBA) World Championship set for Hamburg, Germany, from August 25 to September 3.

The other triumphant Kenyan pugilists were: lightweight Nick Okoth who defeated Mtshita Mandula (Democratic Republic of Congo) 5-0; middleweight John Kyalo who outclassed his opponent, Anouar Koukoa of Sudan forcing the referee to stop the contest 58 seconds into the second round of their scheduled three-round contest.

However, it was a bad night for flyweight Simon Mulinge, who lost to Loic Ngumbi of the Democratic Republic of Congo 4-1.

Women’s flyweight Christine Ongare of Kenya was scheduled to face Algeria’s Roumaysa Boualamin in one of the semi-finals while bantamweight Martin Oduor was drawn against George Molwantwa (Botswana), and light welterweight Victor Odhiambo was to square it out with Cedrick Mahatonga of Botswana on Wednesday night.

Light flyweight Steve Muchoki is the only Kenyan so far who has won a gold medal in the amateur boxing World Cup. Muchoki was a gold medallist in Belgrade, Yugoslavia in 1978 and a silver medallist in the inaugural World Championship event in Havana, Cuba, in 1974.

Two Kenya boxers will be in action Thursday in the quarter-finals, welterweight Black-Moses Mathenge and light heavyweight Elly Ajowi.

Kenya took 12 boxers to the championships – 10 male and two female.

The competition ends on Sunday.