Crawford is considered one of the three best fighters in the world and one of the sport’s most feared. Manny Pacquiao has shown no interest in the Omaha, Nebraska native. Others bristle at the mention of Crawford’s name. Not Indongo, who is no stranger to upsetting the odds. Check out “The Blue Machine’s” thoughts on the potential superfight, Africa boxing and upsetting the odds again.

We hear you’ll be facing Terence Crawford in a unification bout. How close is this fight to being confirmed?

I know that Terence Crawford is a possibility, and a fight that everybody wants to see, but it is up to my management team to decide who my next opponent is going to be. I am willing to fight anybody. If the Crawford fight is next I will of course be willing and ready to fight him and it will of course be a very exciting and interesting fight.

How excited are you about the prospects of this super-fight versus Crawford?

If the fight happens, this will be a total unification fight of four belts between two great fighters which is something that does not happen very often in boxing. I am, however, excited about any fight; I prepare diligently for all my fights because every opponent is a potentially dangerous opponent and it takes only one mistake. Crawford is a hell of a good fighter, everybody wants to fight him and I look forward to whatever happens.

It seems you’re doing your best to give yourself the toughest fight schedule possible. Was there any thought to perhaps taking on a soft touch for your first title defense?

I have fought the best in Africa, I held my WBO Africa title for many years. I went to Russia and won, then went to Scotland to do the same, so it is time to conquer the world now. That comes with high risk. I am at a level now where I need to compete with the best, and at this level there are no real soft opponents. 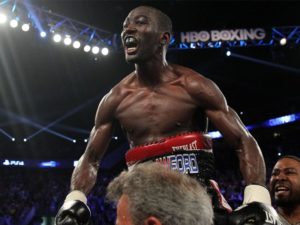 Some people believe Crawford is the best fighter in the world. What are your thoughts on him?

They are right, his record speaks on his behalf. 31-0, defended his title seven times; a very powerful and skillful boxer. You cannot take those credentials away from him, but you are only the best until you meet somebody that is better than you and that person is always out there. In Crawford’s case, I believe I am that person.

How do you see a fight with him playing out based on your styles? Any prediction?

All I can say is that it will be an interesting fight, one where you can’t take your eye off for one second because it will be the best of both worlds and different tactics.

How about fighting in America for the first time. How important is it to you to connect with American fans and establish your name there?

People make a big deal about fighting away from home. For me, that is not a big deal. Once I’m in the ring with you that ring becomes both our homes, that is how focused I am when I enter the ring. America is obviously the home of boxing now, and yes, it is important for me to win this fight or any other fight in America when it happens, not just because it is in America but because I want to remain undefeated and celebrate every victory.

Julius, you’re the first Africa-based fighter to unify two world titles. Is there any motivation to keep those belts and defend against your mandatory opponents? Or is the opportunity to fight a Terence Crawford more important?

I am honored to be the first. Africa had a lot of great fighters and I am following in their footsteps. At home, we had Harry Simon who led the way, then Paulus Moses followed by Paulus Ambunda. It’s good motivation when you train and spar with former world champions. Every fighter wants to keep their belts and I want to do the same because keeping them means winning. If the fight between Crawford happens, I want to make it clear that we will not be taking the fight just to fight him, but because we know we will win and unify all belts.

You seemed to win over many U.K. fans with your win over Ricky Burns. How did the U.K. treat you?

I am grateful for the fans in the UK. I have never seen such a loud and hostile bunch of excited boxing fans in one arena. What humbled me about the fans is how they accepted and embraced the final result. They congratulated me and my team even though they were disappointed and that is what you want to see in the sport of boxing. Fighting in Scotland was a great experience, we remained focused on our goal and working with Matchroom Sports was an honor. I hope to return to the UK one day for another great fight.

What was your take on Burns as a fighter? Was it as easy as it looked to us from the outside?

I am told it looked easy from the outside but it was a tough fight. Burns is a good fighter, two-time world champion and very experienced. I had to change strategy a bit and went full steam. Yes, I ended up dominating the fight but it does not mean he is not a good fighter, he just met a much better fighter in me and that is completely normal. I wish him all the best in his career.

It’s a pity that the rest of the world is only seeing me now. Africa has a lot of great fighters, all they need is the opportunity and exposure.

There is a great boxing scene in Namibia that appears to be on the rise.

Oh yes, Namibia is the home of Africa’s most promising talent, and what makes it great is the exciting and committed boxing fans. MTC Promotions is obviously the biggest and most established Promoter in Namibia and we are all proud to be a part of this revolution. Former world champion Paulus Moses is still going strong, former WBO world champion Paulus Ambunda is still around and highly rated. The list goes on: Sakaria Lukas in the featherweight division—what a great talent, Walter Kautondokwa at 160, Immanuel Naidjala at bantamweight and upcoming stars like Mikka Shonena in welterweight. We have a pool of talent to mesmerize the world for the next decade.

Finally, Julius, anything you want to say in closing?

Thanks for the opportunity to speak to you, African boxing will only rise if we rise ourselves and I commend the African Boxing initiative from BoxingAfrica.com and encourage all African promoters to keep it alive and exciting.