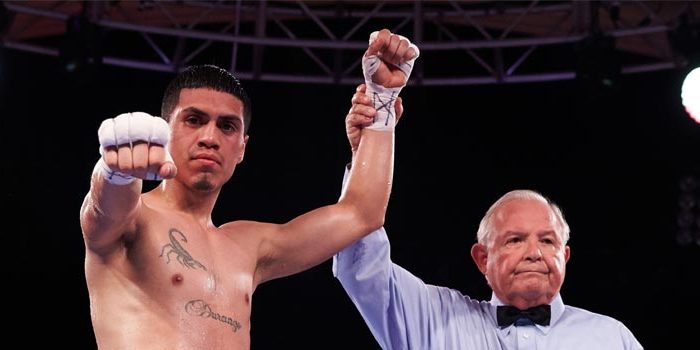 LAS VEGAS (June 15, 2017) – Unbeaten prospect Eddie Ramirez has made big leaps towards his world title dreams in the last year and he will continue on his path on Tuesday, June 20 when he takes on Erick Bone in the main event of Premier Boxing Champions TOE-TO-TOE TUESDAYS on FS1 and BOXEO DE CAMPEONES on FOX Deportes from Sam’s Town Live in Las Vegas.

Tickets for the live event, which is promoted by Mayweather Promotions, are priced at $15, $30, $45 and are on sale now. Tickets are available online at http://www.samstownlv.com/entertain.

Here is what Ramirez had to say about his training camp, his main event showdown and more:

Where have you been holding training camp and how is it going?

“I’m training in Garfield Park in Chicago with George Hernandez, who has trained me throughout my entire professional career. Training camp has been going great, I’ve been conditioned to stay ready because at any time a fight can come my way. I’m always prepared and I’ll show that on June 20.”

What did you learn about yourself from your last two fights (wins over previously unbeaten fighters Ryan Karl and Kevin Watts)? How have you been able to improve as a fighter?

“After fighting Kevin Watts, I immediately shifted my mentality as a fighter to be more in control and to be smarter. Because being a reckless fighter got me caught and got me knocked down. Ultimately, I got the win, but I am thankful for that experience because it helped shape me as a fighter as I continue to face tougher opponents.

“The Karl fight showed off a different Eddie Ramirez. I was a more defensive fighter, I used my counters more and that mindset and growth is what got me the win and will help me get this next one against Bone.”

“My last two opponents have really helped me improve as a fighter. The ability has always been there, but I needed those experiences to bring it out of me. Each opponent has been tougher than the last and it’s been very motivating for me as a fighter to continue to be better and perfect my skill. I have always been the underdog so that’s never been a factor or worry for me, I just take each fight as they come and continue to be better. My defense is better, my athleticism has improved, and my mental ability has progressed.”

How do you see this fight with Erick Bone going?

“My expectations or thought process going into this next fight with Erick Bone is to get him out early. I don’t want the fight to go the distance, I have to do whatever I can do to get him out. He’s an aggressive fighter, he’s a technical fighter who has experience, but I am quicker.”

What are your goals for the next year of you career?

“A year from now I see myself fighting guys in the Top 10. I want whoever is on that list, I believe I will have progressed as a fighter who people know about and believe has the skill to fight for a world title. I just got to beat out whoever comes my way to show the world who I am and how talented I am as a fighter. I want the big names who are going to get me to the big stage for that world title”

Mayweather Promotions and The Floyd Mayweather Jr. Foundation will be collecting school supplies for their 5th Annual Back-2-School Supply Giveaway in conjunction with the upcoming boxing event. The giveaway will take place on August 5th at West Flamingo Park in Las Vegas, NV. Tickets to the fight will be offered in exchange for school supplies.