LONG ISLAND, NY (June 6, 2017) – Browne-Monaghan is on. Unbeaten light heavyweight contenders Marcus Browne and Seanie Monaghan went face-to-face Tuesday at a press conference to discuss their all-New York showdown. The action will take place Saturday, July 15 at the newly-renovated NYCB LIVE. This will be the first live boxing card in Long Island since 1986. The action will be aired live on Premier Boxing Champions on FOX and FOX Deportes.

Tickets for the live event, which is promoted by DiBella Entertainment, start at $50 (not including applicable fees) and are on sale now. Tickets can be purchased online by visiting www.ticketmaster.com, www.nycblive.com, or by calling 1-800-745-3000. Tickets are also available at the Ticketmaster Box Office at NYCB LIVE. Group discounts are available by calling 516-231-4848.

Here is what the participants had to say Tuesday from the JetBlue Overlook the Coliseum:

“Everyone knows that we know each other. But the buddy-buddy talk is out of the window. This is a fight. We both have kids to feed. I have a destiny that is already written, and Seanie is in the way of that. 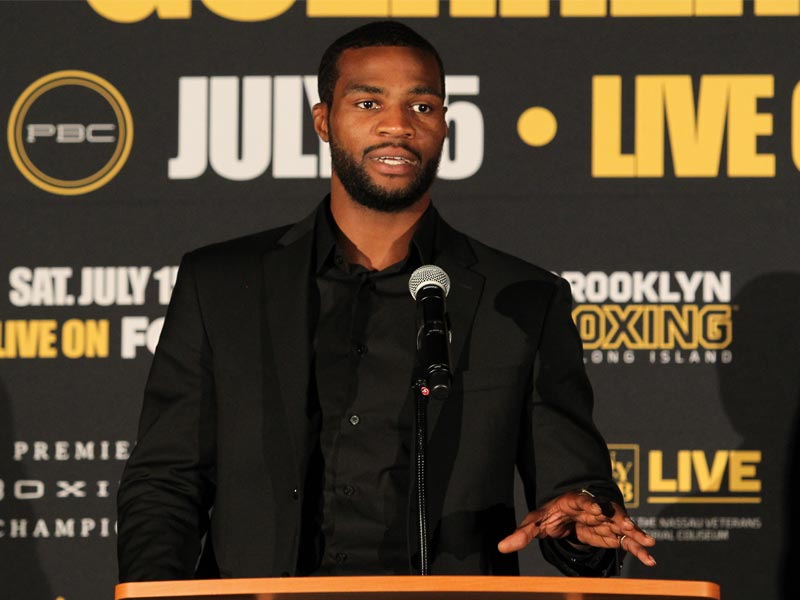 “Come July 15, my feelings about Seanie won’t mean a thing. I’m going to have to win. I know this guy trains like a dog and he’s no pushover. All that sparring and stuff you’ve heard about doesn’t’ mean a thing, it’s just going to be me and him and I have to win.

“I can’t wait to go to work. I’ve fought my friends before and at the end of the day it’s business. I’m going to become a world champion and no one is stopping me.

“I was raised defense-first by Gary Stark Sr. We are defensive specialist. I’m going to show everything that I have in my arsenal.

“Seanie and I came up in the amateurs and won Golden Gloves on the same night. We have history but it means nothing as of today and on July 15. This isn’t sparring, there are no do-overs.

“July 15 is going to be fireworks. These undercard fighters are amazing and it’s a fantastic card for Long Island. I’m just blessed to be able to show my talents in this building. I wish I could wake up tomorrow and it would be fight day. We aren’t friends on July 15. Staten Island is coming out on top over Long Island.”

“I’ve been chipping away at a title fight for a long time. When they asked me about Marcus, I first was thinking that it wasn’t the fight I wanted. At this point in the game, it’s may the best man win. 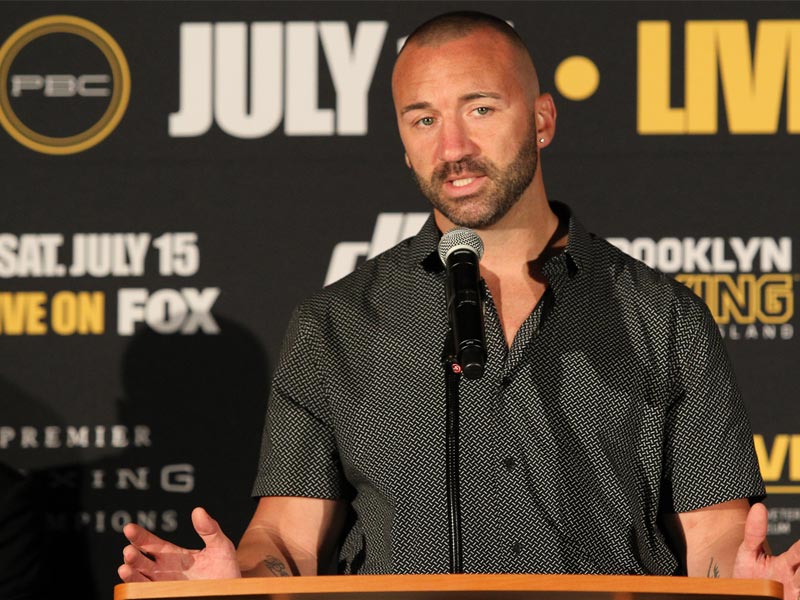 “Training has been going great. We might have to pull back a little bit because we already did a five-week training camp when I thought I was fighting Adonis Stevenson, which turned out to be a good thing. He’s a southpaw just like Marcus so we were already sparring with a lot of really good southpaws.

“Marcus does everything well. He’s fast, he’s slick and he punches pretty hard. I like to fight and come forward and make it that kind of rough style on fight night.

“I’ve mastered the ability to control my emotions on fight night. I’m a professional in my 29th fight so it’s not my first time at the rodeo. This is strictly business, it’s my time.

“This is a dream come true to fight at this venue. This is going to be the biggest night of my life. It’s do-or-die for me.”

“I’m very thankful to Lou for giving me the opportunity. I’ve fought on a lot of great cards at a lot of great venues. But being a Long Island boy who has come to this venue my entire life and to be a part of brining this kind of event back to long island is a dream come true.

“Being on this card and having this venue here is all the motivation I need. I’m going to be in great shape on July 15 and do my part and handle business.”

“I am so glad to be here, especially being from Long Island. It’s a wonderful feeling to be on this great card. We’re going to make Long Island proud.

“The last time they had boxing here was the year I was born. It’s almost destined that I was going to be first woman to fight at this venue for a world title.

“I’m thankful that I have an opportunity to showcase women’s boxing, because we’re not just fighters, we’re athletes. We sacrifice just as much and I’m excited for this fight.”

“I live 15 minutes away and the fact that there is an arena of this magnitude in my hometown, it really means a lot. It feels like it’s meant to be and I’m going to enjoy it.

“The Long Island boxing scene is on the rise. With this Coliseum being renovated, it’s like a Long Island Barclays Center. The scene here will become even more competitive as time goes on.

“I like to box. I’m a pure boxer. I stick and move hit and don’t get hit. I’m not going to fight down to anyone’s level, I’m going to fight at my level.”

“I’m just excited to be here and back in the ring. I have a lot of friends fighting on this show and I can’t wait for all of us to show our skills. There are a lot of great boxers on this show.

“I’m preparing to put on a great performance for the fans and get another win under my belt on July 15. I’m going to make it a memorable debut in my hometown.”

“It’s thrilling to me to be able to promote the first show at Nassau Coliseum in 31 years. The last event featured Mike Tyson and we have a terrific card on July 15 that represents the best fighters from Long Island, plus three fights that can stand on their own featuring fighters that deserve to be there.

“The undercard will be very representative of Long Island. It will be consistent with what we’ve always done as far as promoting cards that are exciting from the minute the doors open through the final bell.

“I’m thrilled that this is on FOX and FOX Deportes and that everyone will be able to see this building rock on July 15. I’m also thrilled with the kind of show they’re getting. What you have is a consistent few hours of unbelievable action. All three of these fights are wars.

“Seanie has been working his way up and just winning fight after fight. He’s been looking for a title shot for a long time. Marcus came into the pros with a lot of noise, but he’s kept winning at every step. This is going to be a really good fight and I don’t think it’s going the distance. You can bank on the fact that the winner of this fight will get a shot at the light heavyweight championship of the world.”

“When we envisioned recreating the Coliseum, the goal was to fuel it with world class programming and I think we’ve done that. We’ve had world class artists, the end of a great run of the circus and in the month of July we will host Brooklyn Boxing on Long Island.

“We’ve had the opportunity to host incredible boxing events in Brooklyn and now we can do it in Long Island. It’s about being able to be somewhat aspirational. The fight community can grow up dreaming of fighting here in the Coliseum. I’m thrilled we can do that for Seanie and the other fighters on the undercard.

“It’s been 31 years since we last had a fight here at the Coliseum and it’s a thrill to bring it back with some great people.  The building is for the community and this will be the first of many boxing events that we host here.”