Who is the best boxer since “Sugar” Ray Leonard? Or even Muhammad Ali? Ask the newer fans and they may tell you it’s Floyd Mayweather. Ask the older ones and they’ll refer to Pernell “Sweet Pea” Whitaker.

Perhaps those gifs will refresh your memory. Pernell Whitaker was untouchable during his peak. Perhaps the greatest defensive fighter of all time, Whitaker could disappear an instant after standing right in front of his opponent. And he did it to all, whether you were a future Hall of Famer or a future civil servant. His career 40-4-1 (17 KO’s) record was marred by disputed decisions: A controversial loss to Jose Luis Ramirez (avenged), a draw to then 87-0 Julio Cesar Chavez, and a close decision defeat to house fighter Oscar De La Hoya.

The most egregious of those was the draw versus Chavez. Over 60,000 people packed the Alamodome in Texas for a rarity in boxing: The pound for pound number one (Chavez) versus the pound for pound number two (Whitaker). “Sweet Pea” masterfully picked Chavez apart over twelve rounds, only to become a victim of the greatest heist on American soil since New York’s Manhattan island was sold for $24. 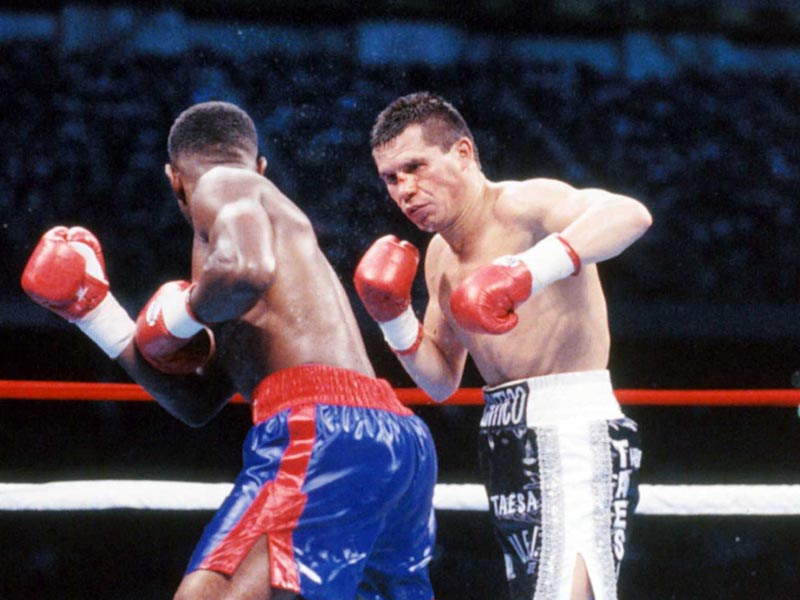 Chavez ranks as Whitaker’s finest win, decision be damned. But his resume is magnificent even without that victory. He was the best fighter on a 1984 U.S. Olympic squad that won nine gold medals, a team that included Evander Holyfield, Meldrick Taylor, Virgil Hill and Mark Breland.

Whitaker won titles in five divisions as a pro, beating a who’s who of fighters from lightweight to super welter. His unique southpaw style has, and possibly never will be, duplicated. And there’s no denying what he accomplished in the ring.

Pernell, thanks for taking time out to chat. I know you stay close to the sport so I got to ask, do you miss boxing?

Honestly? Not as it is right now. We don’t see too many of the best fighting the best. You know, we have Andre Ward against Sergey Kovalev but we need more of these guys to do the same. You’ve got guys picking and choosing who they want to fight and that’s not what boxing is all about. The best have to fight the best. That’s not happening enough for me to miss boxing.

Have other aspects of the sport changed since you were fighting?

You make a good point about talent. We see a lot of different styles in the sport today but no one has been able to duplicate yours. Who taught you that shifty southpaw style?

We have great fighters in the past decade. But I ask the public: Who could do it better than me? Nobody. And I’m not knocking any fighter. I love Floyd [Mayweather]. A great fighter and the best in his generation. I respect all fighters from different periods, before and after me. But a fighter has to believe he’s the best. This is a sport. Floyd used to come around me a lot when he was an amateur. I love him to death. I got a chance to watch him and work with him a little bit while he was coming up. He was still an amateur so it wasn’t nothing but work. He came to my training camp, both he and Zab [Judah].

Have you thought about being a trainer full-time?

I’m not a trainer. But I did work with a few fighters and saw some success, working with them for about six years. But I’m not a trainer. If you ask me for some advice, I can give you advice. But training? Maybe if I can get these guys to put down their cell phones, their social media and all that technology for about four or five weeks, then I would love to come back and train. But I’m not coming back to work with these guys that don’t want to work. They don’t want to put the work in. And to me, if you put the work in, you’ll see the results.

I’m not about to go chasing you around the whole city or wondering when you’re going to show up in this gym because you’re too busy on Instagram and all that. Just foolishness. I ain’t got time for that. But if somebody wants to put the phone down for five to six weeks and put the work in than I would love to work with them. I would give them my 100%. Until then, I don’t need you, you need Pernell Whitaker (laughs).

How did you first get involved in boxing?

It was just a case of being in the right place at the right time. Actually, it was being in the right place at the wrong time (laughs). I was seven-years-old. Me and a kid got in a scuffle and the director was Clyde Taylor. He told us go and get your parents’ permission because you guys are going to settle this one by boxing it out. He put gloves on both of us. That’s how I got addicted. At seven, you couldn’t really box until you were nine, I think. So, I spent two years working out, every day, seven days a week until I was nine-years-old. Going to the gym after school. This was back in the seventies. That was a great time for amateur boxing. Clyde and I worked together for twelve years.

Were there any fighters that you admired or looked up to growing up?

Nah, not really. I can’t say that. I did love watching the amateur boxing though. But not really the pros. I used to watch the United States versus the whole world.

I have great memories of my 1984 Olympic team. And I followed their careers. I love those guys, all eleven of them. You aren’t going to find another Olympic team better than that one. Maybe one day, but I probably won’t be around to see it by then. I had a great Olympics. And I was doing those special things in the ring even back then.

You won a title in only your twelfth bout. You could make the argument that you’re the greatest fighter since Muhammad Ali or Ray Leonard–

(Interrupts) I appreciate that. We lost the greatest last year in Ali but being number two is a safe place to be. To me, no one will ever have a chance at being number one. It’s Ali, period. But he left number two on the planet and I’ll take that.

I think the fans really appreciate what I did now. I wish they would’ve appreciated it while I was doing it (laughs). But that’s okay. I get more love and respect now. They can’t find anyone now who could do it better.

It seems the judges didn’t really appreciate it then either, from the first Ramirez fight, to Julio Cesar Chavez up to the De La Hoya fight.

Man, I don’t know. I think they wanted to see someone catch up with me or knock me out or something. It’s just one of those things where I made the fight look so damn easy, you would think it would’ve been easy to judge! Instead they were making it hard for me to win. One thing I’ll say about those guys you named, they weren’t in a rush to get back in there. Ramirez did. But those other guys, I asked for rematches. I offered rematches but Chavez and De La Hoya ain’t wanna see me again.

I know you’re pressed for time so I’d like to throw some names out at you and you give us your thoughts on that person. You just mentioned Chavez so let’s start with him.

Great fighter. I don’t know him personally but I do know him in the ring and he’s a great fighter. Wasn’t his fault about the decision, it just happened that way. But like I said, they could have had a rematch. They just didn’t want to come this way again.

Man, Azumah Nelson is a great fighter, man. A good friend too. I like him a lot as a person. And with guys like that, it’s hard to climb into the ring with them but if I’m going to be the best, I gotta fight the best. At the time, he was the best in his division. I was the champion in mine and I like to fight the best fighters. Azumah Nelson is tough, man. He kept coming and coming so I had to do what I had to do.

Great fighter. He was a lot younger than me back then. A good young man. I gave him a nice, little boxing lesson, you know? He definitely can’t say he beat Pernell Whitaker. That’s one thing he can’t do. Because ain’t nobody gonna buy that. One thing about it is that I put my career in the hands of the fans, not the judges. I let the fans be the judges.

Another great fighter. He slipped out of my reach some kind of my way. I don’t want to rewind and make excuses. My jaw was broken in the sixth round so I had to change my gameplan. I still had a good gameplan but…truth is, ain’t nobody going into a fight 100% in boxing. So, I don’t have any excuses for that fight. I still think it was close enough for me to be champion but hey, he got me. If you can fight six rounds with a broken jaw than you got to show it to me. I only know one person who done that and that was Ali. It ain’t a good feeling, let me tell you.

You know, I can’t say that one guy was tougher than the other though. They were all tough. Ain’t no one particular guy stands out. And they all hit hard but they just couldn’t hit me.

You mentioned Floyd Mayweather earlier. There are a lot of comparisons to you made by fans. What did you think of him as a fighter and what he accomplished?

He had a great career! You can’t take it away from the kid. And he turned the system all upside down. He manipulated the system to his advantage and took the bank. He’s a great fighter, you can’t take that away from him. He just ain’t Pernell Whitaker but I love him like a son.

The rival to your crown during your day was Roy Jones Jr.

Come on, man. Roy was a nineties fighter. That’s a great fighter in the best decade you gonna ever have. An Olympian like myself. So I have a lot of respect for Roy.

Pea, looking back at your career from winning Olympic gold to becoming a five-division champion, what accomplishment are you most proud of?

Winning Olympic gold medal. Everybody can’t win an Olympic gold medals. Anybody could be a world champion, sh*t even you (laughs). But not everybody can win a gold medal at the Olympics. It only comes around once for every four years so imagine if you don’t get it the first time. That’s what I’m most proud of.

But as far as my pro career, I just want the fans to remember me well. Whether it’s pound for pound or the greatest defensive fighter ever on this planet. Couldn’t nobody do it better than Pernell Whitaker. That’s how I want to be remembered. 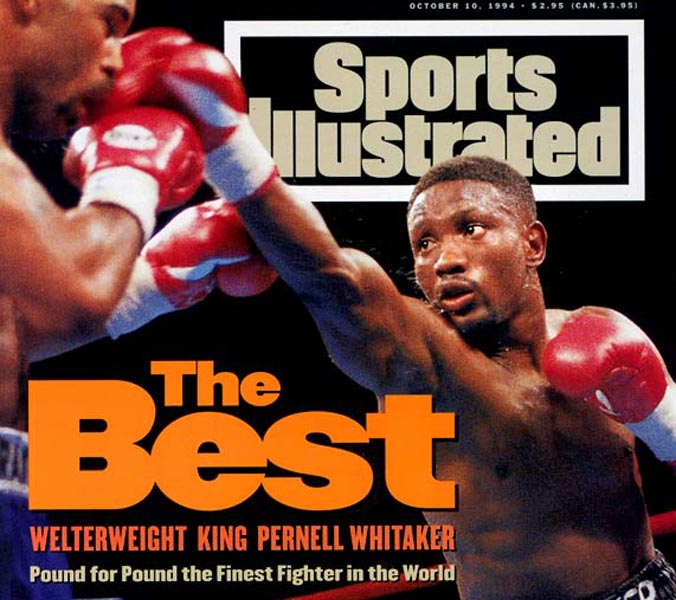