“This is a great opportunity for ‘KO Night Boxing, LLC’ to expand our brand to another state,” promoter John Andersen said.  “We’re very happy to be coming to WinnaVegas and working with Mayan Beltran and his team.  We’re kicking this new relationship off in a big way with these two regional title fights on CBS Sports Network.   We hope that this is just the start of a long-lasting relationship between KO Night Boxing and WinnaVegas.

“The principal fighters in the two nationally televised fights are all on the verge of breaking out to become stars.  A lot is at risk for all of them.  Our promotional company is known for giving a platform to top prospects in highly entertaining, competitive matches that boxing fans love watching, whether they’re in the arena or watching on CBS Sports Network.”

“I am very excited to have CBS Sports Network boxing back at WinnaVegas Casino Resort,” CEO Mayan Beltran commented.  “Our fans really like boxing and it looks like we have a great fight card, so it should be a fun night. I am looking forward to working with promoters KO Night Boxing LLC, Neon Star SE, Roc Nation Sports and, as always, Ringside Ticket Inc., to deliver this exciting night of entertainment.”

Fighting out of Dallas, Hooker is world rated at No. 2 by the World Boxing Organization (WBO), and No. 4 by the International Boxing Federation (IBF).  The 27-year-old Hooker was a decorated amateur boxer in Texas, finishing with a 97-7 (67 KOs) record, who turned pro in 2011.

Hooker first captured the vacant NABO title in 2015, at home in Dallas, with a six-round technical knockout of previously unbeaten Eduardo Galindo (10-0-1).  Since, Hooker has made three successful title defenses against Ghislain Maduma (17-1) at the famed Madison Square Garden on Nov. 17, 2015, Ty Barnett (23-5-1) at Oracle Arena on August 6, 2016; and in a 10-round draw with former World Boxing Association (WBA) World Champion Darleys Perez (33-2-1) on undercard of Sergey Kovalev vs. Andre Ward “Pound-For-Pound” on Mov. 19 in Las Vegas.

In his most recent fight on Feb. 25 in Mexico, Hooker cruised to a dominant 10-round decision victory over former IBF World Champion Cristobal Cruz (41-20-4).

Ramirez, 25, is a former FECOMBOX Lightweight Champion, fighting out of Ciudad Juarez, Mexico. Ramirez, who is riding a nine-fight win streak, will be fighting outside of his native Mexico for the first time against Hooker.

The 10-round co-feature for the vacant United States Boxing Association (USBA) featherweight crown has been in the works for a while and it could very well steal the show as former USBA champion Daniel “Twitch” Franco takes on Jose Haro. 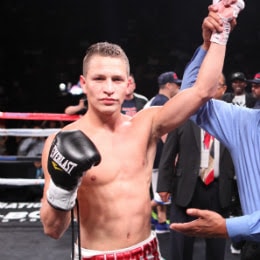 The 25-year-old Franco (15-1-3, 10 KOs), fighting out of Rancho Cucamonga, California, started boxing at the age of eight, amassing an amateur record of 67-15, highlighted by gold-medal performances at the 2006 Oxnard PAL Championships and 2017 California State Silver Gloves Championships.

Fighting under the Roc Nation Sports banner, Franco captured the vacant USBA featherweight title last November, knocking out previously unbeaten Derrick Murray (13-0-1) in four rounds.  Franco was stopped in his last fight by veteran Christopher Martin (29-8-3) in the third round of their non-title fight in Los Angeles on March 23.  Franco is currently rated No. 5 by the USBA and No. 11 by the NABO.

USBA No. 14-rated Haro (13-1-1, 7 KOs), who is a well-kept secret outside of West Jordan, Utah, is an all-action fighter.  The 29-year-old has won his last five fights, unbeaten in in his last six with a draw, since suffering his only loss to highly-touted prospect Toka Kahn Clary (11-0) by way of a six-round decision in 2014.

All fights and fighters are subject to change.  Additional bouts will soon be announced.