New York, NY/Louisville, KY – May 25, 2017 –  Evander Holyfield’s Real Deal Sports & Entertainment, in association with Top Knotch Boxing and Kentucky Venues, has announced that its promotional debut will be a quadruple-header televised live on CBS Sports Net, on Saturday, June 24, at 10pm ET, from Freedom Hall, in Louisville, KY. The inaugural installment of the “Real Deal Championship Boxing” series, branded as “Evander’s Tribute to Ali”, will be a part of the local “I AM ALI” Festival in honor of Muhammad Ali, one year after the champ’s passing. Headlining the card will be the always-exciting heavyweight contender Derric Rossy facing Puerto Rican Carlos Negron in a 10-round bout with the vacant WBC Continental Americas title at stake.

“I am proud to bring this exciting card to Louisville, KY, as well as to the boxing fans around the world,” said Evander Holyfield, Co-Owner of Real Deal Sports & Entertainment. “We have entertaining fights featuring fearless competitors and this is how we want to set the standard for our company.”

“Real Deal Sports & Entertainment is determined to put on quality, competitive, entertaining bouts, and we believe that this debut event is undoubtedly representative of our company’s vision,” said Eric Bentley, COO of Real Deal Sports & Entertainment. “The main event on June 24 is truly a crossroads bout, with highly touted Puerto Rican Olympian Carlos Negron stepping up to challenge the seasoned gatekeeper Derric Rossy, who has been in with the best and will be hungry to keep his world title hopes alive. In the co-feature, Puerto Rican Olympian Enrique Collazo faces his toughest challenge in the battle-tested and always dangerous Steven Martinez. We will also be showcasing our newly signed, extremely talented junior lightweight contender Toka Kahn Clary, as he continues his comeback in a special attraction eight-round bout. A clash of welterweight prospects will open up the card, with Pete Dobson and Jeremy Nichols willing to risk their undefeated records.”

“Facing Negron is another great fight in the right direction for my career,” said Rossy. “A tall, athletic and tough boxer like Negron is going to be a difficult task, but at this point in my career, there are no easy fights. I am looking forward to getting in the ring against Negron with the WBC Continental Americas belt on the line. There is a lot of excitement in the heavyweight division again and a win on June 24 will get me back in the rankings and ready to make some noise.”

“I’m very excited to be back and put up a great fight for the fans in Louisville, KY,” said Negron. “Rossy is a good fighter, but I am ready to win this fight and capture the WBC Continental Americas heavyweight championship. I can’t wait to get to Louisville and get back in the ring on June 24.”

In the televised co-feature, San Juan, Puerto Rico’s hard-hitting prospect Enrique Collazo (11-0-1, 9 KOs), a 2012 Olympian, will square off against Steven Martinez in an eight-round middleweight contest, in what will be his toughest test to date. Collazo won the WBC Fecarbox middleweight title on April 22, 2016, with an eight-round unanimous decision over Oscar Riojas, then defended the belt last September. Having fought mostly at home in Puerto Rico and the Dominican Republic, this will be Collazo’s first fight in the US since his February 2013 pro debut that ended in a draw.

Born in Bayamon, Puerto Rico, but now based out of The Bronx, NY, Steven Martinez (17-3, 13 KOs) is trained by Marco Suarez and has been a pro since 2009. On December 19, 2015, Martinez earned his most impressive win, stopping 29-5-1 Jorge Melendez inside two rounds. He has never been knocked out, and two of his losses came via split and majority decisions. As an amateur, Martinez accumulated a 103-17 record and was a three-time New York Golden Gloves champion, three-time New York Metro champion, two-time Empire State Games champion and a National Golden Gloves champion in 2008, where he was voted the ‘Most Outstanding Boxer’ of the tournament.

Junior lightweight contender Toka Kahn Clary (21-1, 15 KOs) will continue his quest for a world title, competing in an eight-round special attraction bout. He has rebounded from his only loss last September with two wins by knockout. Born in Monrovia, Liberia, Kahn Clary immigrated to the United States as a child, initially living in Philadelphia, PA, before settling in Providence, RI. Trained by Peter Manfredo Sr. since his amateur days, Kahn Clary turned pro in 2012. A highly accomplished amateur with a 119-11 record, Kahn Clary began boxing at age 14 and was a National Golden Gloves champion and a five-time New England Golden Gloves champion.

Welterweight up-and-comers “Pistol” Pete Dobson (8-0, 5 KOs), of The Bronx, NY, and Jeremy “J Flash” Nichols (7-0-1, 2 KOs), of Las Vegas, NV, put their undefeated records on the line in the eight-round televised opener. A New York Golden Gloves champion, Dobson is a fan-friendly, aggressive volume-puncher who can box as well as brawl. While still an amateur, Nichols, originally from Long Beach, CA, gained invaluable experience as a sparring partner for Floyd Mayweather Jr. leading into the mega fight with Manny Pacquiao. Nichols is intent on testing himself, as Dobson will be his fourth unbeaten adversary upon turning pro in October 2015. Both Dobson and Nichols will compete in their first scheduled eight-rounder.

Tickets for the live event on June 24, promoted by Real Deal Sports & Entertainment in association with Top Knotch Boxing and Kentucky Venues, are priced at $105, $79, $58 and $41. Tickets are on sale now and can be purchased via Ticketmaster, online at this link or by calling 800-745-3000. Doors open at 6:00pm ET, with the first bout scheduled for 7:00pm ET.

VENUM is a proud sponsor of Real Deal Sports & Entertainment.

Evander Holyfield’s Real Deal Sports & Entertainment will promote world-class and entertaining boxing events and will strive to be a company that does what is best for the sport and the fighters. With Holyfield’s vision to provide mentorship to athletes, prioritize fighter health and safety, and create innovative and interactive platforms for the fans, Real Deal Sports & Entertainment is at the forefront of revolutionizing the sport of boxing.

Founded in 2015, Louisville TKO is a nonprofit organization that strives to empower youth by giving them tools to build positive futures. It depends on the support of individuals to fulfill its mission to transform the lives of youth through structured boxing programs and positive reinforcement. 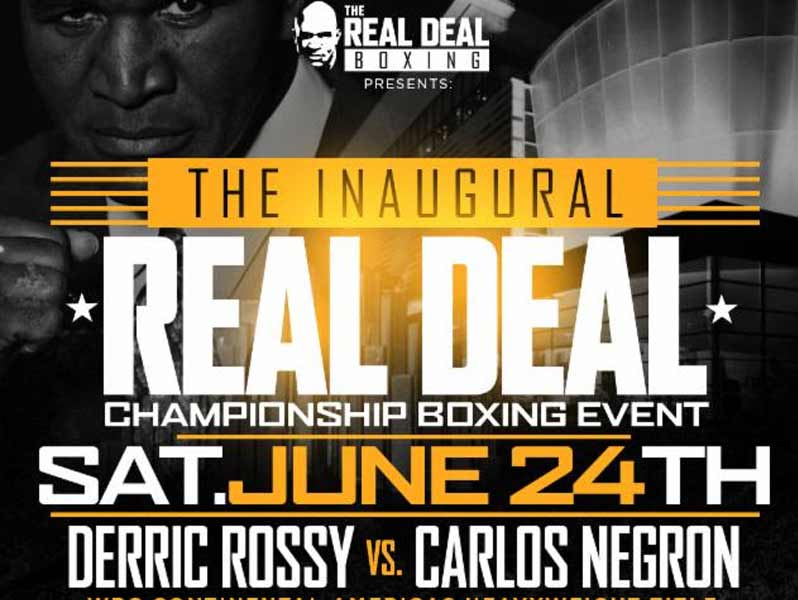